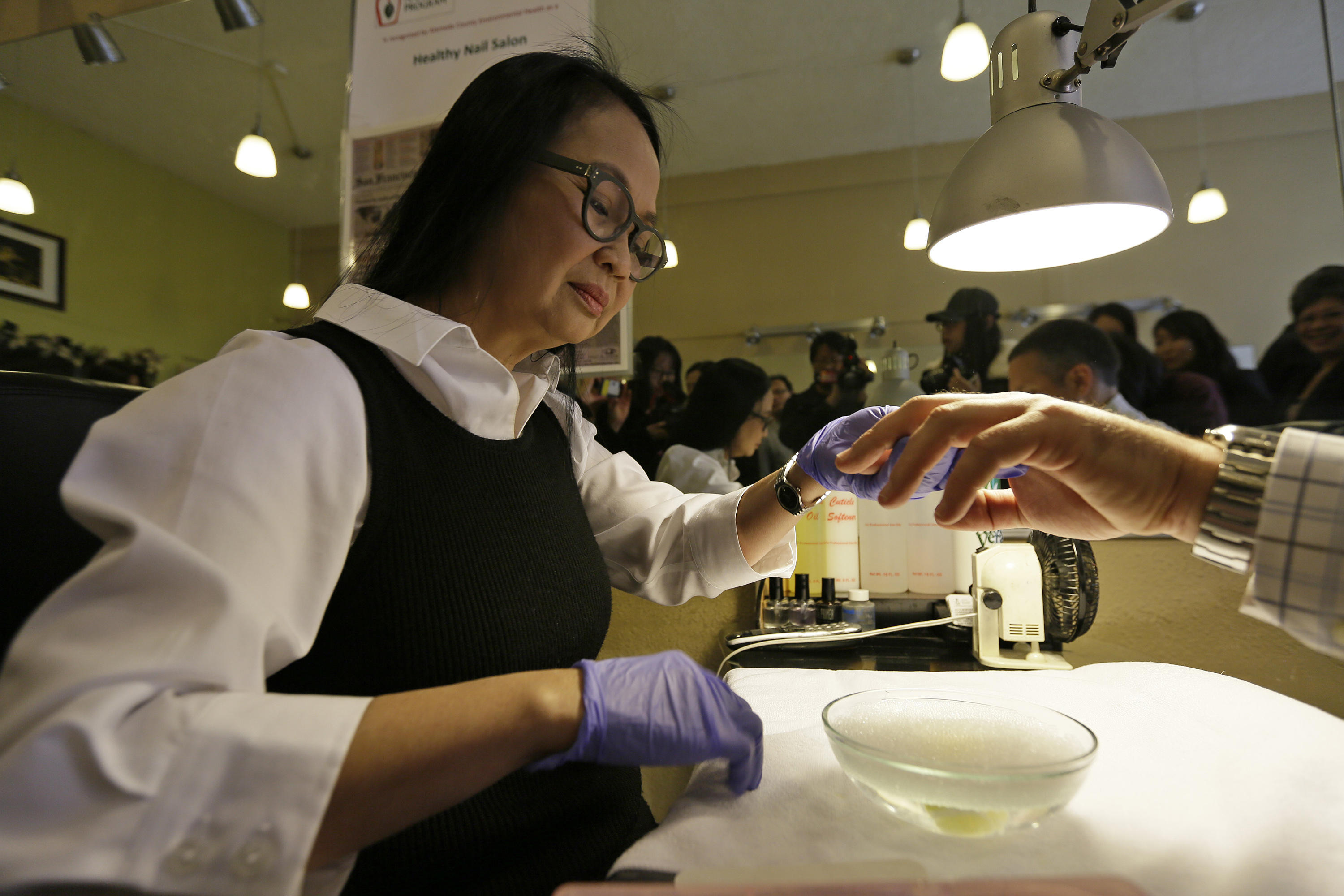 OAKLAND, Calif. -- It was the swag-bags that convinced community health organizer Julia Liou to redraw the battle plan in a fight to reduce the hazardous chemical exposures of nail-salon workers, most of them low-paid Asian immigrant women.

In 2005, Liou watched at California’s state Capitol as dozens of lobbyists gave away bags of lipsticks and other beauty goodies to excited legislative staffers. It was part of the beauty and chemical industries’ effort to defeat a bill to ban one of the thousands of industrial compounds used to make manicure and pedicures prettier and longer lasting.

Liou and her colleagues lost on that bill. But the state Capitol cluster-swag emerged as a defining lesson for Liou, underscoring how hard it would always be to go lobbyist-for-lobbyist against the U.S. beauty industry, with its $62 billion in estimated revenue last year.

That episode has given rise to a San Francisco Bay Area grass-roots campaign of salon workers, health workers and local officials that has taken hold in California and is gaining increasing national support and recognition from the U.S. Environmental Protection Agency, Harvard’s John F. Kennedy School of Government and others.

“I realized we need to bring the voices of the community there ... to really articulate what was really happening, what workers were experiencing on the health side,” said Liou, development director of Asian Health Services, a clinic and outreach program in Oakland’s Chinatown where staffers first took note more than a decade ago of how many nail-salon workers were dealing with cancer, headaches, miscarriages and other health problems.

Since then, the California Healthy Nail Salon Collaborative that Liou co-founded has spearheaded a California effort to reduce the toxicants that salon workers touch and breathe. Cities and counties taking part in the program certify salon owners who voluntarily ban suspect ingredients and nail products and who provide proper ventilation, gloves and masks for workers.

The health complaints voiced by the country’s more than 400,000 nail-salon workers, mostly immigrants from Vietnam, the Philippines, South Korea and other Asian countries and many with limited English or political experience, have gotten more attention over the last decade.

In New York, Gov. Andrew Cuomo has mandated ventilation systems and other measures to reduce chemical exposure in nail salons. Some businesses and local groups around the U.S. have tried self-certifying healthy nail salons.

But California’s voluntary program stands out for the local government certification and for giving salon owners and workers the say on what health measures salons could best afford, as well as the training and encouragement to speak out on their health concerns.

One morning this winter, TV crews, state and federal officials, and salon workers crowded inside a storefront nail salon in the San Francisco suburb of Alameda. The gathering celebrated the salon as one of the newest of 143 in the Bay Area and the Southern California city of Santa Monica to win local government certification as a healthy salon.

On the sidewalk outside, the owner of another salon, Van Nguyen, stood and cried.

In support of the program, Nguyen had told California policymakers of miscarriages she suffered and the debilitating skin ailments that plagued a son she carried to full term.

Having earlier won certification for her own San Francisco nail parlor, Nguyen, 46, was proud she had spoken out to protect other workers. But she mourned the harm she believes she did to her offspring through long days working with glues, removers and polishes.

“I had misfortune, but I did the best I can,” Nguyen said. “I don’t want anyone else to suffer like me.”

Beauty product trade groups and chemical makers deny the ingredients targeted by healthy-salon programs, including formaldehyde and other chemicals known or believed to cause cancer or other harm, are dangerous at the levels used in products.

Regardless, leading manufacturers already have removed many chemicals most cited by critics, said Lisa Powers, spokeswoman for the Personal Care Products Council.

“A chemical gets a bad name in a very simplistic way,” as opposed to risk-based science, Loretz said.

Critics counter that the country’s scientific and medical communities have failed to study any long-term threat from the industrial compounds that salon workers may work with daily for years.

California’s Department of Toxic Substances Control opened hearings this month to examine the safety of some of the most frequently questioned ingredients in nail polishes and other products. Karl Palmer, chief of the department’s branch for safer consumer products, said the hearings could lead to recommendations for safer alternatives or other state action.

The EPA awarded the California program a $120,000 grant in part because it believes the model could expand nationally, said Matthew Tejada, director of the agency’s office of environmental justice.

The involvement of salon-workers was critical to their success, he said.

“They’re not looking to just make a policy critique on some intangible, philosophical point,” Tejada said. “They’re trying to make their lives better.”