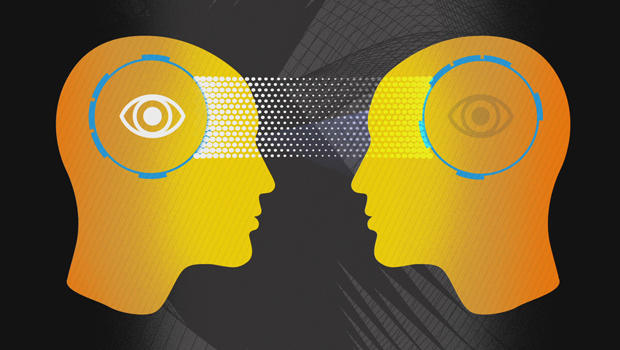 Many people claim (and many others question) the existence of ESP -- Extra Sensory Perception. Erin Moriarty of "48 Hours" has gone searching for answers (Originally broadcast March 18, 2018):

In the 1970s, a handsome ex-Israeli army paratrooper popularized extrasensory perception, or ESP. Uri Geller claimed he could bend spoons with his mind, see inside sealed containers, and even read other people's minds.

It was great television. But off-stage, Geller had also caught the eye of the intelligence community.

"This is where it got very interesting, because scientists would consider, 'Wait a minute, maybe we can read the minds of other government officials; maybe we can see inside a nuclear facility in Russia,'" said national security reporter Annie Jacobsen.

It sounds incredible, but it's true. Relying on now-declassified documents, Jacobsen has written about the U.S. government's decades-long to attempts to use Uri Geller, and others like him, for psychic espionage.

"It's sort of like a highly-classified black program inside of a black program," Jacobsen  said. "One, because you don't want the Russians or the Chinese to know what we are doing; and two, because a lot of scientists didn't want their colleagues to know what they were doing, because of the embarrassment factor."

And there had long been reports, said Jacobsen, that the Kremlin was also experimenting with ways to weaponize people with ESP.

"There's a declassified report that talks about the Pentagon's real fear -- citing Uri Geller by name -- that if he was able to bend metal with his mind, he might be able to use his mind to interfere with the delicate electronic systems on a nuclear-tipped ICBM," Jacobsen said.

But Uri Geller's skills turned out to be unreliable, as on his now-infamous appearance on "The Tonight Show" in 1973.

Johnny Carson: "Uri was telling me, you don't feel, what, strong tonight?  Is that…"
Geller: "I don't feel strong. I can't…"
Carson: "Well, I'm not trying to pressure you. I'm really not."

Still, that didn't stop the government experiments. In the 1980s, the Defense Intelligence Agency began "Project Star Gate," which was, according to Dean Radin, a scientist who worked on the program, top secret. "It's actually beyond top secret."

The program employed about a dozen psychics and mediums. Its aim: espionage.

Moriarty asked, "To see whether someone in the United States could spy on other countries from here, just using their minds?"

"It did work, yeah," Radin replied.

Angela Ford was with Project Star Gate for nine years. She calls herself a medium; the Defense Department preferred "remote viewer." "I was good at finding people," she said. "I was good at locating things."

Moriarty asked, "In a sense, were you hired as a psychic spy?"

Her assignment?  To look for missing hostages and fugitives without ever leaving a building at Fort Meade in Maryland.

She recalled one assignment, in 1989, when she says she was able to psychically track down a former customs agent who had allegedly gone rogue.

Ford was off by one letter -- it was Lovell, Wyoming.

"Well, when my boss went to Customs and said, 'We're still getting the Wyoming feeling,' Customs said, 'As we are speaking, we are apprehending Charles Jordan, 100 miles west of Lovell, Wyoming.'"

"So you were right?"

Ford said, "We were right."

There is no obvious explanation for how Ford obtained the intel that turned out to be accurate. But could it have been ESP?

Not according to physicists like Cal Tech's Sean Carroll. When asked if there is such a thing as extrasensory perception, Carroll replied, " No. I think we know enough about the brain to say, no, it really doesn't work that way. We'd be able to test that, be able to put a little receiver next to your head and pick up those signals if they were actually coming."

Angel's Ford's response: "They can't detect it yet."

Moriarty asked her, "But you believe ESP exists?"

In 1995, Project Star Gate was shut down. But government interest in the paranormal has not been completely abandoned. Writer Annie Jacobsen says the military is working to see if certain soldiers have "enhanced perception," or "precognition" -- sensing what will happen before it does.

Dean Radin, now at the Institute of Noetic Sciences (which studies ESP), put Moriarty through a test:  "This experiment is going to see if your body responds before you see an emotional picture as compared to before a calm picture."

If the pupils of Moriarty's eyes dilate before the disturbing pictures appear on the screen, that's precognition.

Does she have any special powers? Yes! She reacts five seconds before seeing an emotional picture.

"Whoa -- I sure didn't see that coming … which is why I have my doubts," Moriarty said.

But those who have seen people like Uri Geller and Angela Ford in action say you can't dismiss the idea that some people may have ESP.

Radin said, "What we're talking about is something like a talent, similar to musical talent or sports talent. So, there will be some people who are at the Olympic level; most of us aren't there."

Journalist Annie Jacobsen said, "There's instances of unusual situations, but there is no proof. It does not pass scientific muster."

The playful architecture of Frank Gehry

Gwyneth Paltrow on turning 50, family, and Goop
Thanks for reading CBS NEWS.
Create your free account or log in
for more features.
View CBS News In
CBS News App Open
Chrome Safari Continue
Be the first to know
Get browser notifications for breaking news, live events, and exclusive reporting.