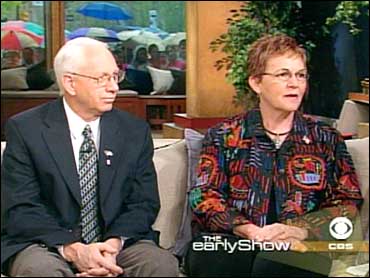 When the call to duty comes, the Johnson boys respond. Paul and Marilyn Johnson's seven sons from Holladay, Utah, have been raised to do their duty to their country and God. Currently, four of their sons and one son-in-law are on active military duty.

Caleb, Bill, Nick, and son-in-law Doug are serving in Iraq, while younger brother Chris was recently deployed to Afghanistan.

The eldest son was rejected because he wore braces, but the other two older brothers successfully served their country.

Paul Johnson credits his sons' willingness to serve their country to what they learned as Scouts. He tells The Early Show co-anchor Rene Syler, "They were all Eagle Scouts, and they learned principles early on in life. Our son-in-law joined, and they just all followed suit."

Caleb, Bill and Nick are serving in the same battalion in Iraq. Caleb and Nick are even tent-mates, which Marilyn Johnson says gives her a sense of comfort.

Pricey Vs. Cheap Shades Put to the UV Test

She says, "They've really grown close together. I think that is a bond they'll have the rest of their lives. And Bill is also in the same battalion. So they can communicate with each other and see each other when they're all in camp. They hang out together. So it gives us a triple feedback at home."

Their sons are all married, which has been difficult for the families they left behind. "Bill has two daughters, and Doug has six sons," Marilyn Johnson notes. But Paul Johnson says, "They're doing pretty good. Of course, when they were extended, everybody was disappointed, and it was a rough few days."

Besides the brother Chris in Afghanistan, the three brothers in Iraq have been on active duty since February 2003. Their son-in-law Doug was deployed to Iraq in January 2004. And it was expected that they would come home by Thanksgiving.

Paul Johnson says, "Originally, they did. And then they were on their way to Kuwait to come home. And when things heated up, I had a feeling that they would be going back."

Asked what she thinks, based on what happened recently to the Witmer family in Wisconsin that lost the one twin, Michelle, about soldiers lost in this effort, Marilyn Johnson says, "Our heart aches every time we hear a soldier that we've lost. And we mourn with them. And our heart goes out to them."

As for worrying about her boys, she says, "I worry about them constantly. And when I see it on TV, I watch it. And, of course, every soldier that I see looks like mine. And I can see part of mine in every one of them. And it's heart-wrenching to see it. But I know they're where they're supposed to be. They still like it. They feel like they have accomplished a lot, and they're doing a good work."

And while at home, these proud parents support their sons in their effort through Operation Caring Hands, a non-profit organization that sends school supplies to Iraq for distribution by U.S. troops.