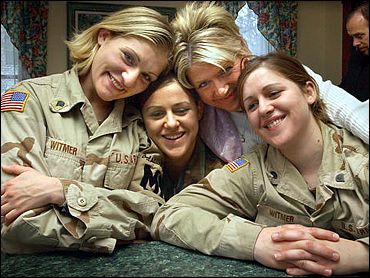 With three daughters serving in Iraq, John and Lori Witmer had a family Web site with photos from Baghdad, notes to home and messages of encouragement.

But the top notice, dated Sunday, carried grim news: "We regret to inform you that Michelle Witmer was killed in action April 9th ...."

The 20-year-old private died when her Humvee was ambushed in Baghdad, making her the first woman in the Wisconsin National Guard to die in combat.

Her family is asking the military to stop her sisters from being sent back to Iraq after this week's funeral.

"I can't live another year like I've lived this one," John Witmer told The Associated Press. "The sacrifice that this family's made can never be understood by someone who hasn't gone through it... It's a burden I can't bear. My family can't bear it."

"We trust that those in charge of making such a decision will realize that we have already sacrificed enough and that our family must not be asked to bear such an impossible burden," Apt read.

The family also said state National Guard leaders agreed to take their appeal to the Pentagon on Monday.

Michelle's 24-year-old sister, Rachel, served in the same unit, the 32nd Military Police Company, which was expected to leave Iraq shortly but just had its duty extended 120 days.

Charity Witmer, Michelle's twin, was sent to Iraq late last year as a medic with Company B of the Wisconsin Guard's 118th Medical Battalion.

John Witmer acknowledged the final decision of whether to return will be up to his daughters. But he said they would have to understand "how terribly we need to know they're not going back."

Witmer said he worried about his daughters joining the military but felt at the time that duty with the National Guard would be relatively safe, especially with a military police unit.

"My daughters wanted the freedom of being able to call their shots with their education," he said. "They were using that to go to school."

Last September, the family was still supportive of the operation in Iraq, but, mother Lori Witmer told WTMJ then, frustrated.

"You're sitting here, and you're absolutely powerless to do anything. It's a very frustrating feeling," she said.

Jan Pretzel, the sisters' grandmother, told the Milwaukee Journal Sentinel that by February, Michelle had an inkling her unit might soon ship out of Iraq because members were told to tell their families to stop shipping packages.

"This is a REALLY GOOD SIGN!!" she wrote in an e-mail. "The redeployment process (though it may be long) is finally beginning! There is finally a light at the end of the tunnel!"