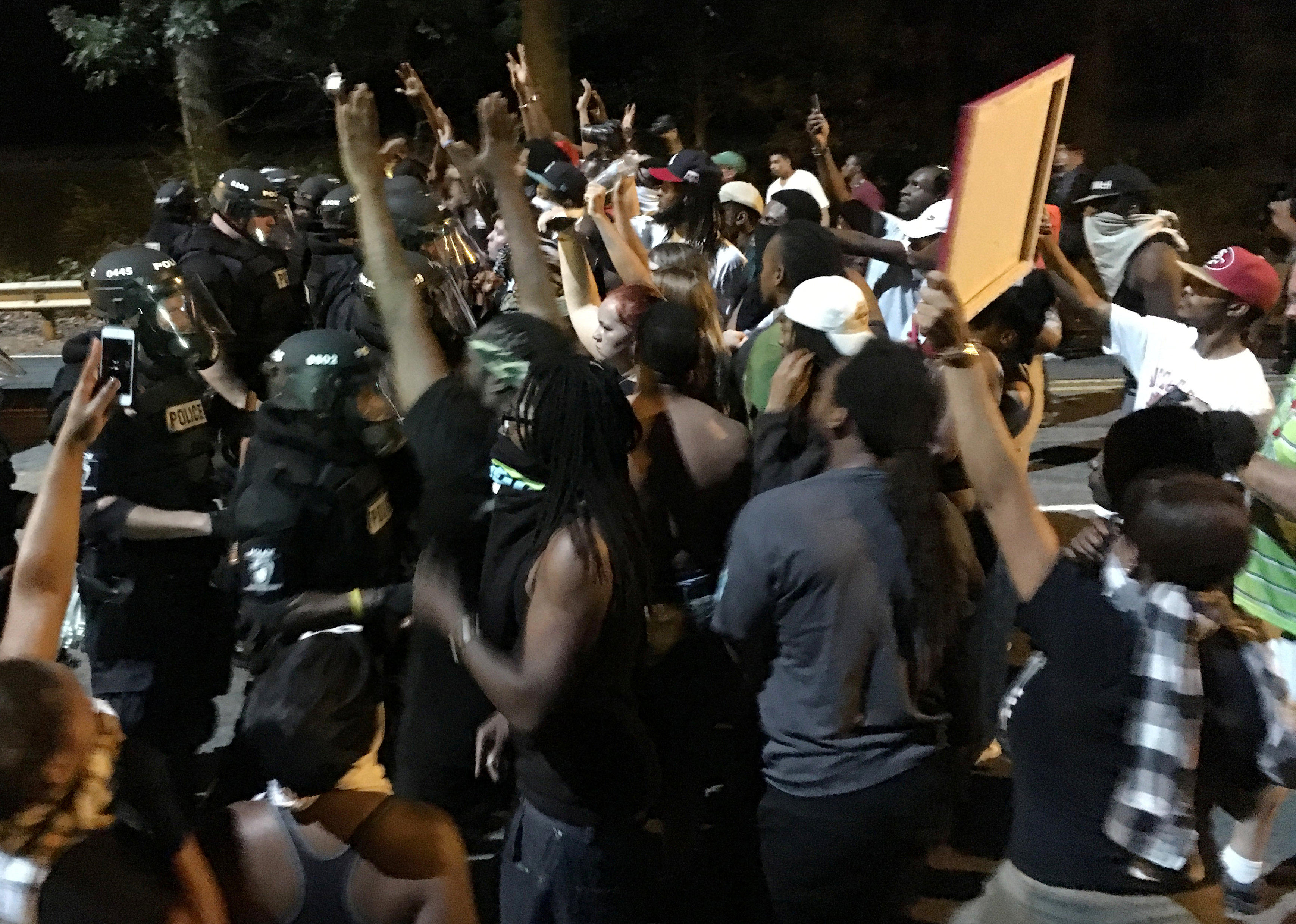 The Charlotte-Mecklenburg Police Department tweeted that demonstrators were destroying marked police vehicles and that approximately 12 officers had been injured, including one who was hit in the face with a rock. WBTV said 7 officers and a civilian were brought to an area hospital.

Water bottles were also thrown. Television coverage showed police firing tear gas to break up the crowd. Arrests were kept to a minimum, the station said.

Early Wednesday, protesters made their way to Interstate 85 and began throwing rocks at passing traffic, prompting police to close the highway. WBTV tweeted:

Later, WBTV tweeted that police formed a line enabling traffic to get by, the road re-opened, and protesters moved to another location.

Then came word that a Walmart had been damaged by demonstrators.

The protests came just hours after another demonstration in Tulsa, Oklahoma, over the shooting there of an unarmed black man by police.

Charlotte police went to the apartment complex about 4 p.m. looking for a suspect with an outstanding warrant when they saw the man -- not the suspect they were looking for -- inside a car, department spokesman Keith Trietley said in a statement.

Officers saw the man get out of the car with a gun and then get back in, Trietley said. When officers approached, the man exited the car with the gun again. At that point, officers deemed the man a threat and at least one fired a weapon, he said.

Officer Brentley Vinson, who shot Scott, has been placed on administrative leave, which is standard procedure in such cases. Vinson has been with the department for two years.

Detectives recovered a firearm at the scene and were interviewing witnesses, Trietley said.

CMPD Chief Kerr Putney told reporters it’s uncertain whether there was a connection between the suspect police had been seeking and Scott, WBTV says.

A woman claiming to be Scott’s daughter live streamed the scene on Facebook for more than an hour after the shooting, the station says.

In the video, she said her father was unarmed when he was shot.

She said Scott was sitting in his vehicle reading a book and waiting for the school bus to drop off his son. In the video, she is heard saying police came up to him, yelled for him to get his hands up and broke open the car window.

She claims he was Tasered, then shot four times. In the video, she said her father was disabled, didn’t have a gun and was even scared of them.

A woman who identified herself as Scott’s sister was also at the scene. She also said her brother didn’t have a gun.

WBTV tweeted about it:

Police blocked access to the area, which is about a mile from the campus of the University of North Carolina at Charlotte, as protesters gathered after the shooting.

Local television video showed police in riot gear stretched across a two-lane road confronting protesters at the apartment complex later in the night. Some of the officers flanked the main line on one side of the road.

Some protesters were heard yelling “Black lives matter,” and “Hands up, don’t shoot!” One person held up a sign saying “Stop Killing Us.”

Other footage showed protesters lingering around a police vehicle after shattering its windows.

Earlier, a tow truck was brought in to take another police cruiser away. Local media outlets reported that car suffered damage to its rear end.

It appeared at one point the crowds were blocking patrol cars from moving in the street, even climbing on top of them, reports WBTV.

The CMPD tweeted just after 10 p.m. that its Civil Emergency Unit was deployed “to safely remove our officers from old concord [sic]” after demonstrators surrounded officers trying to leave the scene.

One television news crew retreated from the scene after demonstrators began rocking their remote van, which was parked near the apartment complex where the shooting occurred.

A WBTV photographer was injured:

In Tulsa, hundreds of people rallied outside police headquarters calling for the firing of police officer Betty Shelby, who shot 40-year-old Terence Crutcher on Friday in a confrontation that was captured on police dashcam and helicopter video.

Shelby’s attorney has said Crutcher was not following the officers’ commands and that Shelby was concerned because he kept reaching for his pocket as if he was carrying a weapon. An attorney representing Crutcher’s family says Crutcher committed no crime and gave officers no reason to shoot him.

Local and federal investigations into that shooting are ongoing.