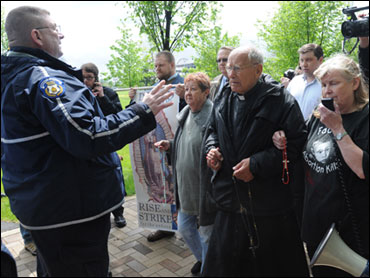 Protests continued through the night at the United States' foremost Roman Catholic university, as demonstrators object to the school's decision to invite President Obama to give the commencement address this afternoon, given his stands on abortion and embryonic stem-cell research.

Anti-abortion activists promise to disrupt the president's appearance on Sunday at the University of Notre Dame in South Bend, Ind., where he also will receive an honorary degree.

But some anti-abortion right activists are concerned the protesters will go too far and wind up hurting their cause.

WSBT correspondent Kirk Mason reports that there are three semi-trucks traveling around town displaying large images of aborted fetuses, as well as of an African-American man who appears to have been beaten.

The trucks are paid for by the Center for Bio-Ethical Reform, a Calif.-based group. A spokesman told WSBT that the pictures are designed to point out the inconsistencies of President Obama, that the country has overcome the evil of slavery but not abortion.

The organization's head, Gregg Cunningham, posted on his Web site part of his response to a parent's complaint who objected to the group "ruining" her son's law school graduation. Cunningham wrote that "if Mr. Obama is such a noble person and abortion is such a trivial matter, why would you be so troubled that we are showing the Class of 2009 the babies Mr. Obama is killing?"

"I understand the passion of those like myself who want to protect innocent babies from being killed," Rep. Mark Souder, R-Ind., told WSBT. "But the key thing here is to persuade those in the middle who don't agree with us." Souder is both an abortion opponent and a Notre Dame graduate.

WSBT correspondent John Paul reports that students attending the vigil reflected on their last days on campus, with some saying the protests have led to healthy discussions and debates, and that the attention hasn't taken away from their achievements.

"It hasn't overshadowed it too much anyway," said student Brian Desplinter, who attended the vigil. "I think our student body on campus has handled the controversy particularly well, in contrast to some of the outside parties.

"I'm thankful to be on campus with these people and the opportunity to learn in a peaceful environment," Desplinter told WSBT.

But one didn't have to travel far to see signs of the storm that initially broke out when the school extended (and Mr. Obama accepted) an invitation to address the graduating class.

On Saturday at the school's front gate at the intersection of Angela and Notre Dame Avenue, more than 100 people gathered to protest the invitation to Mr. Obama.

Among those arrested was the Rev. Norman Weslin, a Catholic priest and founder of the Lambs of Christ abortion protest group. He also was among 21 people arrested during a similar protest Friday.

None of those arrested Saturday was a student, Brown said.

She said she had planned to be arrested on Saturday, but changed her mind when a security officer ushered her to the side and gave her a chance to walk away.

"I didn't know why he just kind of gently moved me away. So I'm like, maybe this isn't the right time," McCorvey said.

Some driving past the protesters on Saturday waved in support. Others yelled at them. One man honked his horn in protest and held up a handful of hangers, a symbol of the gruesome procedures some pregnant women resorted to before Roe v. Wade.

Later, about 10 pro-Obama demonstrators assembled across the street holding up placards with slogans such as "Honk if you support Obama" and "Pro-Jenkins/Notre Dame."

The Rev. John Jenkins, the university president, has been criticized by many (including dozens of bishops) for the school's decision to invite President Obama.

When asked by WSBT about the controversy surrounding this year's graduation, student Chris Falin said, "I don't think it's the right venue for this sort of thing. It's a little frustrating that it has been turned into a circus or a discussion about the abortion issue."

As the weekend graduation festivities got underway yesterday, there seemed little sign at the ceremonies themselves of the furor. Students with their gowns on walked along happily Saturday afternoon with their parents apparently oblivious to the protest just a few hundred feet away.

University spokesman Dennis Brown said there were no reports of protests at any of the university's various schools, centers and institutes. For the most part, the only difference on campus was the heightened security for Mr. Obama's visit, he said.

About 12,000 people attended commencement Mass at the Joyce Center on Saturday evening. Neither the Rev. Jenkins nor Bishop D'Arcy mentioned the controversy during the 85-minute service.

A full page advertisement in the South Bend Tribune on Saturday had the headline: "Catholic Leaders and Theologians Welcome President Obama to Notre Dame." The ad, signed by university professors around the country, many of them at Catholic schools, said that as Catholics committed to civil dialogue, they were proud Mr. Obama was giving the commencement address.

There were some students, though, who opposed Mr. Obama giving the speech. ND Response, a coalition of university groups, has received permission from Notre Dame to hold a protest on the west end of the South Quad on Sunday. Spokesman John Daly said he expected 20 to 30 graduating seniors to skip commencement and attend the prayer vigil.

Some students who planned to attend the commencement said they would show their displeasure at the Obama invitation by putting a yellow cross with yellow baby's feet atop their mortarboards.

In his commencement speech, Mr. Obama "obviously would make mention of the debate that's been had" over abortion, while emphasizing that "this is exactly the kind of give-and-take that is had on college campus all over the country," White House spokesman Robert Gibbs said.