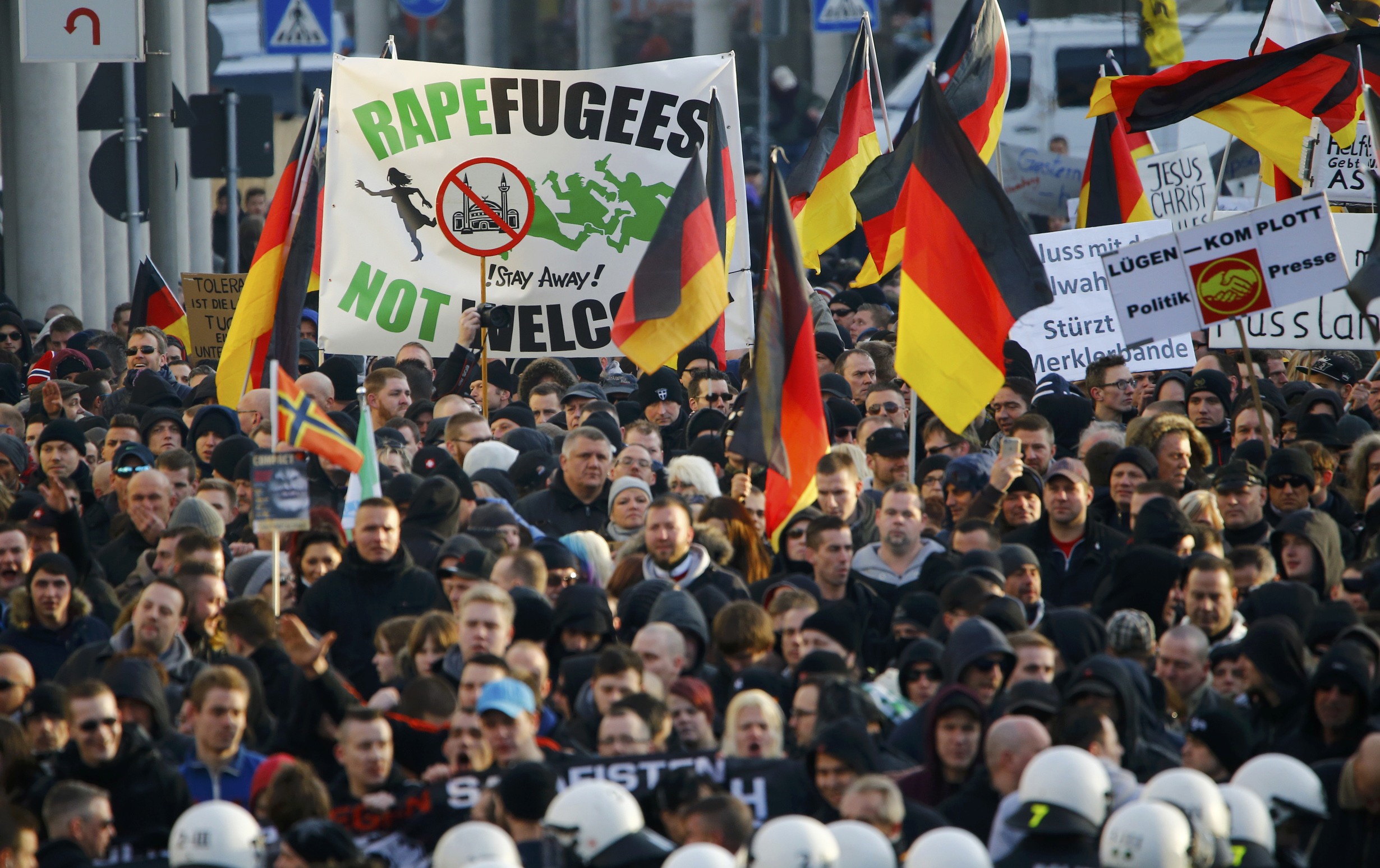 COLOGNE, Germany -- Women's rights activists, far-right demonstrators and leftwing counter-protesters took to the streets of Cologne on Saturday to voice their opinions in the debate that has followed a string of New Year's Eve sexual assaults and robberies blamed largely on foreigners.

Specifics of the New Year's Eve assaults and who were behind them are still being investigated. The attackers were among about 1,000 men gathered at Cologne's central train station, some of whom broke off into small groups and surrounded women, groping them and stealing their purses, cell phones and other belongings, according to authorities and witness reports. There are also two allegations of rape.

The incident has sparked a debate about the behavior of migrants in Germany after witnesses and police described the perpetrators as being of "Arab or North African origin."

The PEGIDA demonstration Saturday was shut down early by authorities using water cannons after protesters threw firecrackers and bottles at some of the 1,700 police on hand. Police said four people were taken into custody but no injuries were immediately reported.

"It's about making clear that we will not stop moving around freely here in Cologne, and to protest against victim bashing and the abuse of women," said 50-year-old city resident Ina Wolf.

In response to the incidents, Merkel said her CDU party on Saturday had approved a proposal seeking stricter laws regulating asylum seekers.

"What happened on New Year's Eve were despicable criminal acts which call for decisive answers," Merkel said, according to Reuters. "This is about women who were victims of sexual attacks. Our thoughts are with them. And now of course we have to face these new tasks and challenges."

Merkel said the proposal, which will be discussed with her coalition partners and would need parliamentary approval, would help Germany deport "serial offenders" convicted of lesser crimes.

However, she also reiterated her mantra on the refugee issue, insisting again "we will manage it."

Bonn University political scientist Tilman Mayer said he doesn't see the CDU proposal as neither a change of course, nor one likely to dispel many Germans' concerns.

"This is just a building block in a chain of statements from the government and also the chancellor," he said on Phoenix television.

Though Merkel has decried the assaults as "repugnant criminal acts that... Germany will not accept," they provide fodder for those who have opposed her open-door policy and refusal to set a cap on refugee numbers.

Influential Hamburg broadcaster NDR said in an opinion piece posted online Friday that such crimes threaten to push xenophobia toward the "middle of the population" - which could lead to a backlash against refugees.

"And who is to blame mainly?" the editorial asked. "These young, testosterone-driven time bombs with their image of women from the Middle Ages."

Despite the harsh rhetoric, the case is not yet that clear and the investigation is ongoing.

Of 31 suspects temporarily detained for questioning following the New Year's Eve attacks, there were 18 asylum seekers but also two Germans and an American among others, and none were accused of specifically committing sexual assaults.

Cologne police on Saturday said more than 100 detectives are assigned to the case and are investigating 379 criminal complaints filed with them, about 40 percent of which involve allegations of sexual offenses.

"The people in the focus of the criminal investigation are primarily from North African countries," police said. "Most are asylum seekers or people living illegally in Germany. The investigation into if, and how widely, these people were involved in concrete criminal activity on New Year's Eve is ongoing."

Witness Lieli Shabani told the Guardian newspaper the attacks appeared coordinated, saying she watched from the steps of the city's cathedral as three men appeared to be giving instructions to others.

"One time a group of three or four males would come up to them, be given instructions and sent away into the crowd," the 35-year-old teacher was quoted as saying. "Then another group of four or five would come up, and they'd gesticulate in various directions and send them off again."

National broadcaster ARD called the attacks a "wake-up call" that illuminates the difficulty that lies ahead for Germany of integrating the newcomers.

"But we must not give in to our fears," ARD said. "If we now take all the refugees into custody, if we erect fences around our homes and country, if we join the swing to the right that some of our neighbors have, then we give up all we have achieved."

Cologne's police chief was dismissed Friday amid mounting criticism of his force's handling of the incidents, and for being slow with releasing information.

Speaking in Mainz, Merkel said local authorities must not be perceived to be withholding information and urged that the case be "fully clarified."

"Everything has to be put on the table," she said.

The proposal passed by her CDU party's leaders would strengthen the ability of police to conduct checks of identity papers, and also to exclude foreigners from being granted asylum if they have been convicted of crimes and sentenced to terms even as light as probation.

"Serial offenders who consistently, for example, return to theft or time and again insult women must count on the force of the law," Merkel said.