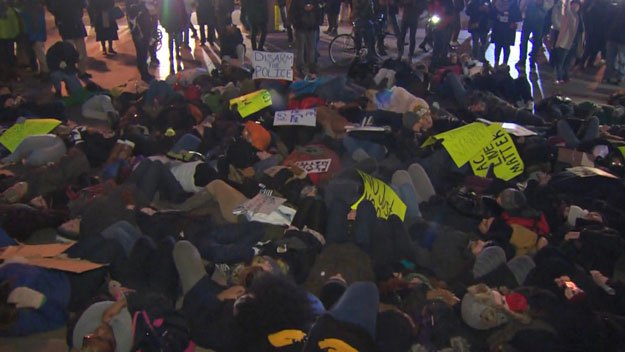 Dozens of people briefly lay down in the plaza in front of the Boston Public Library on Wednesday evening while others held signs saying "black lives matter" and "a young black man is two times more likely to be shot dead by police than a young white man."

Similar protests have occurred in Boston and other cities in response to recent decisions by grand juries in Ferguson, Missouri, and New York City not to charge white police officers in the deaths of unarmed black men.

Boston police reported no arrests or disruptions to nearby festivities following the die-in. Protesters were expected to join the parade down Boylston Street later.

A day earlier, Mayor Martin Walsh and Police Commissioner William Evans had urged activists to hold off on the die-in, saying it was not appropriate for the family-friendly event.

But participants said the demonstration was an important reminder of how the killings of unarmed minority youths affect families.

"There's a lot of pressure for us not to do this but we thought it was a fundamental right that we have in this country," protest organizer Brock Satter told CBS Boston.

"A 12-year-old child was shot down by police in Cleveland, Ohio," said Stan Lawrence, of Cambridge. "This is a very appropriate place to be because these are the people that need to know about this."

Cleveland has seen a number of anti-police protests recently, some prompted by the Nov. 21 fatal shooting of 12-year-old Tamir Rice, who was holding a pellet gun when police responded to a report of an armed man.

First Night, now in its 39th year, draws tens of thousands of people to downtown Boston with a mix of ice sculptures, music, fireworks and other activities. Its emphasis on wholesome, non-alcohol-fueled fun has inspired similar celebrations around the world.