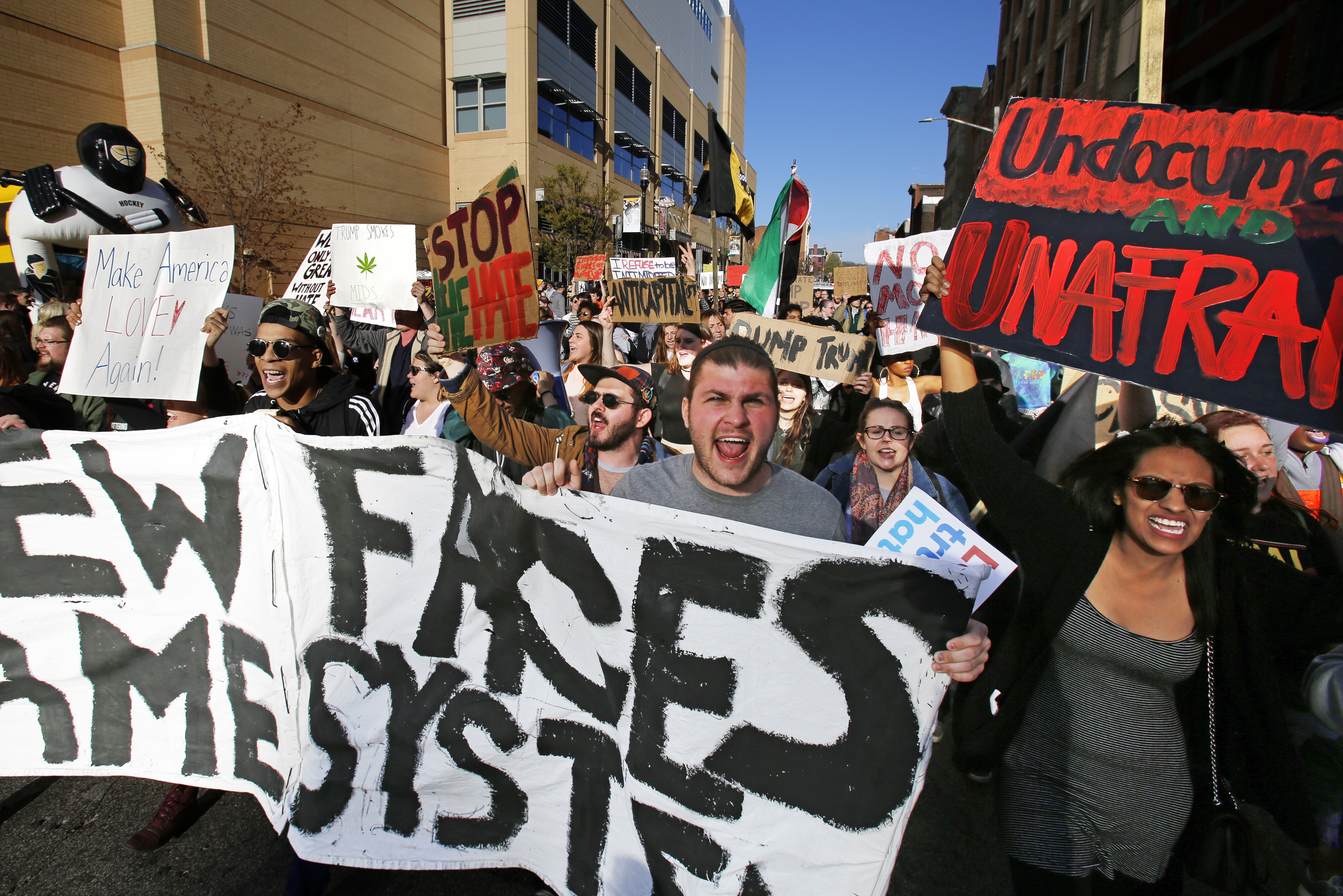 PITTSBURGH-- Republicanpresidential candidate Donald Trump made a stop in Pittsburgh on Wednesday for a pair of campaign events, one in Oakland and the other downtown.

He taped part of a television show in Oakland first, and then held a rally at the David L. Lawrence Convention Center amid protests this evening, CBS Pittsburgh reported.

CBS News' Jacqueline Alemany was outside the convention center and recorded a confrontation between a protester and a Trump supporter.

Alemany told CBSN emotions were high on both sides.

Trump supporters started lining up at 8 a.m. at Soldiers and Sailors Memorial Hall for the 5:30 p.m. taping of Sean Hannity's show on Fox News, CBS Pittsburgh reported. The events were Trump's first campaign stops in Pittsburgh.

Many of his supporters began gathering very early for his rally at the Convention Center as well.

"He's not taking money from anyone," one woman waiting in line at the Convention Center told CBS Pittsburgh. "He doesn't have to kiss anybody's butt. And you know... he's very strong and he's for the people, the working people."

At the rally, Trump told supporters he intends to bring back the region's steel and coal industries. He also said Pittsburgh Steelers quarterback Ben Roethlisberger is a friend of his.

At the Convention Center, protesters blocked the main entrance inside, and police had to form a line to allow his supporters in through another entrance. It was estimated to be one of the largest anti-Trump protests this year.

Supporters of the Black Lives Matter movement began to march on Soldiers and Sailors Hall just before 5 p.m. as Trump supporters waited to be let into the Hannity show taping.

The Black Lives Matter supporters brought signs and were chanting. There was some strong language reported and Pittsburgh Police were on the scene, but things remained non-violent.

About 100 protesters gathered in Oakland, leading to the arrest of three individuals Wednesday night, according to the Pittsburgh Police Department.

All three demonstrators were charged with counts of rioting and aggravated assault, while two of them were also charged with resisting arrest.

Other protesters took to the streets, making their way through city streets, slowing down drivers and Port Authority buses.

Another of the protests was led by Braddock Mayor John Fetterman, who is a Democratic candidate for U.S. Senate.

Fetterman says he's against Trump's racist and sexist stances, as well as what he calls his "ignorant rhetoric towards immigrants." The group plans to march to the Convention Center.

Pittsburgh Public Safety officials continually monitored social media for any hot spots during Trump's visit and had contingency plans in place for any trouble.

"We will continue to monitor and validate the credibility of these threats throughout the day, and will respond accordingly. As always, our first and primary concern is the safety of the City," Public Safety Director Wendell Hissrich said in a statement.