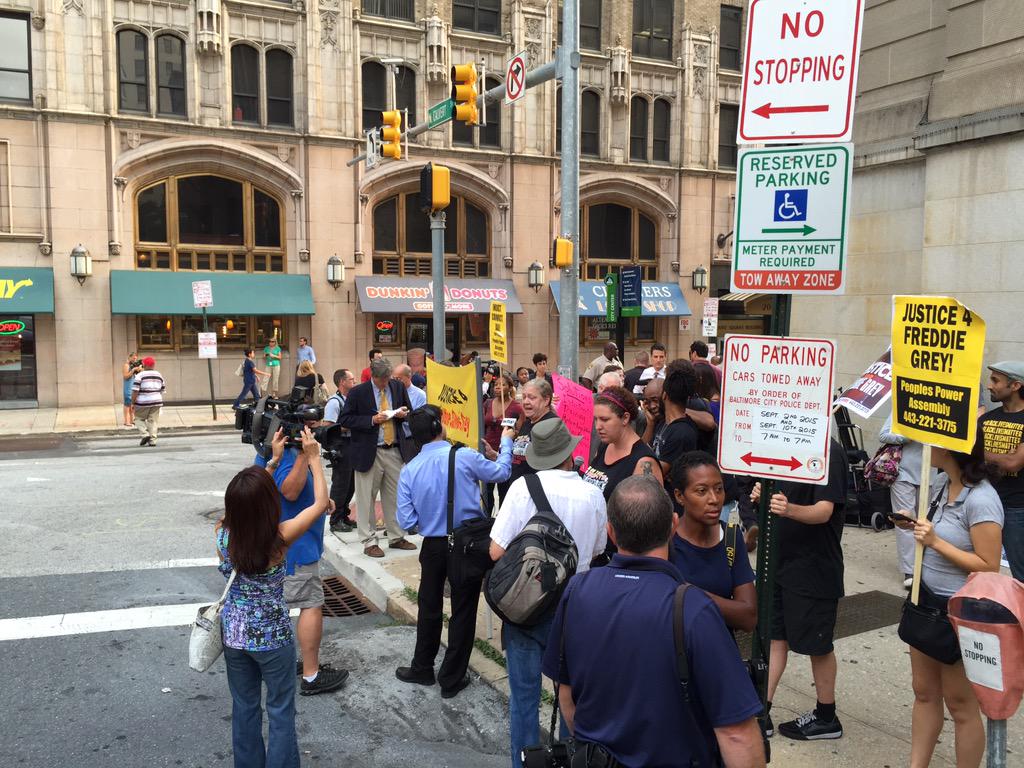 BALTIMORE - A hearing in connection with the death of Freddie Gray, a black man who died a week after suffering a critical spinal injury while in custody, is under way.

Six Baltimore police officers have been criminally charged in the case.

Prosecutors and defense attorneys are presenting arguments on three key issues at the hearing Wednesday. Those issues include whether State's Attorney Marilyn Mosby should recuse herself, whether the officers should be tried together or separately, and whether the charges should be dismissed.

CBS News Justice Reporter Paula Reid reported from inside the courthouse that the six officers are not present for Wednesday's hearing. Mosby, however, is.

The judge gave the prosecution and defense attorneys 15 minutes each to argue on the first two motions. The first motion focused on whether Mosby acted inappropriately when she held a news conference to announce the charges against the officers.

Defense attorneys argued that the news conference served as a "pep rally," where Mosby sought approval of the crowd and called for vengeance for Gray by convicting the officers, Reid reports.

Mosby's staff of prosecutors argued that Mosby has the right to read the charges publicly because they are public record and she was trying to bring calm to the city.

In response, the judge noted it is not Mosby's job to call for "calm" in the city as she did at the news conference, Reid reports. The judge also noted that Mosby has every right to read a document in the public record. The defense, however, wants all of the evidence read by Mosby at the news conference to be suppressed, which would ultimately dismiss the case against the officers.

The second motion asked for Mosby and her staff to be taken off the case.

The judge called for a 20-minute break before the third motion on whether to charge the officers together or in a group is addressed.

Gray's April 19 death led to protests in Baltimore, and a riot that prompted the National Guard to intervene and the city's mayor to declare a city-wide curfew.

Prior to the hearing beginning Wednesday, about 50 protesters gathered outside the Baltimore Circuit Court and were taking turns with the megaphone. They were carrying yellow signs with slogans including, "Stop racism now" and "Indict, convict, jail." A banner said "Justice 4 Freddie Carlos Gray."

"Every time a black man comes in contact with police, it doesn't have to be a death sentence," one protester yelled.

Others chanted, "All night, all day we gonna fight for Freddie Gray."

Video of a man apparently being taken into custody was posted on Twitter by a CBS Baltimore reporter.

The Baltimore Police Department posted on Facebook that the protesters blocked the roadway briefly and were given instruction to move out of the roadway.

"Most have acknowledged and moved to sidewalk. Approx. 50-70 people. An arrest has been made," the post said.

The protesters outside the courthouse called for a change of venue and continued legal action against all six police officers. They also expressed support for Mosby, and called for "emergency action" if any of the charges against the officers are dismissed.