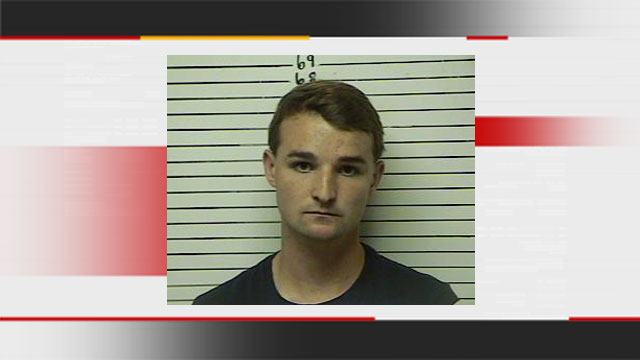 TULSA, Okla. - The son of a rural Oklahoma newspaper publisher fatally shot his father, mother and sister, believing that by killing his family, he would inherit money to pay off mounting debts, a prosecutor said Wednesday.

Prosecutors in Duncan filed three charges of first-degree murder against University of Oklahoma student Alan Hruby, 19, in the killings of his father, John, 50; mother, Tinker, 48; and his 17-year-old sister, Katherine, court records show. Alan Hruby did not yet have an attorney.

Stephens County District Attorney Jason Hicks said Hruby owned money to a loan shark. Hicks did not say why Hruby had so much debt, only that his spending was out of control.

"The reason we were given for the murders was that he was having financial difficulties," Hicks said at a news conference in Duncan. "He felt if he murdered (his family) he would be the only heir to the estate."

Hicks said Hruby shot his mother and father twice each and his sister once. He later left the family's house and disposed of the gun and disc from a home security system. Hruby then traveled to Dallas for the weekend, where he stayed at the upscale Ritz-Carlton hotel, Hicks said.

Hicks said Alan Hruby acted "very nonchalant" and "cold and callous" when he arrived at the home where the bodies of his parents were discovered by the family's housekeeper Monday.

"I tend to think this is a very heinous and atrocious crime," Hicks said. "This shows the fact there was no remorse; this shows this was an evil person."

"Any tears that were shed (by Alan) were crocodile tears," he said.

Burmann told CBS affiliate KWTV he is in disbelief over the accusations against his friend and that nothing seemed out of the ordinary on their trip to Dallas.

"We were laughing, making jokes and he was hiding this... which is one of the scariest things," Burmann said.

"Nothing he ever did sent up any major red flags," Burmann told the station.

He did concede, however, that Alan Hruby had a problem when it came to spending. Burmann said the 19-year-old belonged to Shoppers Anonymous.

"He was very, very lavish," Burmann said. "It was characteristic of him to just go out and buy things on a whim."

John Hruby was the publisher of The Marlow Review, a weekly newspaper with a circulation of about 3,500. His wife also worked at the paper.

Hruby was also publisher of The Duncan Banner until 1997, when his family sold that paper, and was vice president of the Oklahoma Newspaper Foundation Board of Trustees, a part of the Oklahoma Press Association.