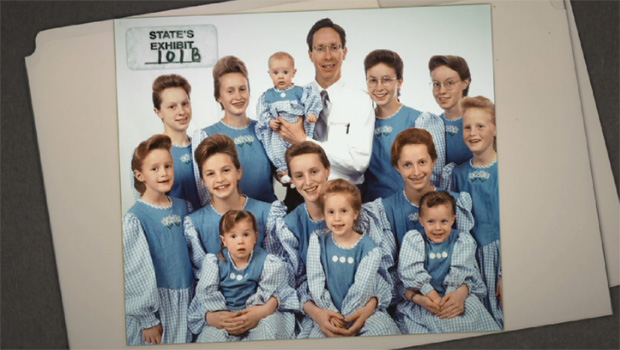 To those who fled the polygamous religious sect led by Warren Jeffs, their lives had been a living hell, in which young girls were raped, all material wealth was diverted to the leader, and all contact with the outside world was banned.

The head of the breakaway Mormon Fundamentalist Church of Latter-Day Saints (FLDS), which had set up a community in the isolated mountains on the Utah-Arizona border, portrayed himself as a prophet who spoke God's law on Earth. And anyone who was deemed to be a threat to Jeffs was banished.

As carefully detailed in the gripping new documentary, "Prophet's Prey," the FLDS was more than a sect; it was a criminal syndicate, engaging in shell corporations, money laundering, kidnapping, extortion, tax fraud, and trafficking of children.

"Prophet's Prey" is now playing theatrically in New York City, and opens September 25 in Los Angeles and elsewhere. It will debut on Showtime October 10.

Jeffs married dozens of young women and girls (including some of the women his father, sect leader Rulon Jeffs, had taken before he died in 2002), fathering dozens more children. He was placed on the FBI's Most Wanted List, and despite protection from local authorities, was captured and convicted of rape charges in a Utah court in 2007.

After his conviction was overturned, Jeffs was tried in Texas and convicted of child sexual assault in 2011. He was sentenced to life plus 20 years.

"I think there are a lot of similarities in the male-run institutions which practice power through exploitation and abuse," said director Amy Berg, whose past films include the Oscar-nominated documentary, "Deliver Us From Evil" (about abuse of children within the Catholic Church), and the Hollywood expose, "An Open Secret."

Berg collaborated with private investigator Sam Brower (whose seven-year probe into the FLDS formed the basis of his bestselling book, "Prophet's Prey") and journalist Jon Krakauer, for what is a truly harrowing look into the mindset of Jeffs and that of followers who'd either fled his enclave or were cast out.

She wrote letters to Jeffs twice a week for almost two years, with no response. But while he is not interviewed directly, the film contains his chilling depositions from behind bars and the successful prosecution against him, as well as audio recordings of his teachings to FLDS members. There is also a recording of Jeffs' apparent rape of one of his many child brides.

The film also contains harrowing interviews with former sect members who were indoctrinated in the teachings of Jeffs, and then left the fold, their faith and feelings of trust destroyed.

"For each person it's different," Brower said of the path for former sect members. "Some people leave, some were kicked out. [Some] do it at a much quicker pace, but mostly it's a long process to slowly integrate themselves with the rest of the world. Even years later, I spoke with people who'd been kicked out or left who are still wearing the clothes and still haven't quite shaken the whole thing yet."

Berg noted, "The people that got kicked out of the church seem to have a little bit more motivation to rebuild their lives than the people that left [on their own]. They had all of their faith stripped away and lost everything so they had a better starting point." She said that several of those who left willingly experienced a lot more guilt, due to their leaving families behind.

Though Jeffs is serving a life sentence in solitary confinement at a maximum security prison in Texas, with only an hour a day outside his cell for exercise and phone calls and visitors on weekends, "he can send as much mail as he wants," Brower said, "so he is able to get a lot of information out" -- including his "revelations" about the future of his church.

The putative head of the FLDS community now is Warren's brother, Lyle, but Brower says Lyle is just serving as a mouthpiece for his jailed sibling: "I don't doubt that Lyle takes liberties now and then, but Warren is still running the show," he said.

"I think he likes it that way -- still being the boss with none of the worries. I kind of think that he has settled into that world."

Jeffs also continues to play the role of martyr, to extend his control over his followers, to the point of having mockups of his jail cell erected at the entrances of the FLDS meeting house so that the faithful would experience the conditions of his imprisonment.

"He constantly blames them and their unrighteousness for being in prison," Brower said. "He's told them repeatedly, 'If you'd had enough faith, the prison walls would tumble and I'd be out of prison.'"

And yet, despite the conviction of its head, the church has not stopped flourishing, with followers setting up communities in South Dakota, Colorado, Texas, North Carolina, Alaska, Oklahoma, Montana and Mexico, "Anywhere where they can start gathering up work, they'll start establishing themselves," Brower said. "I'm sure there are places we don't even know about."