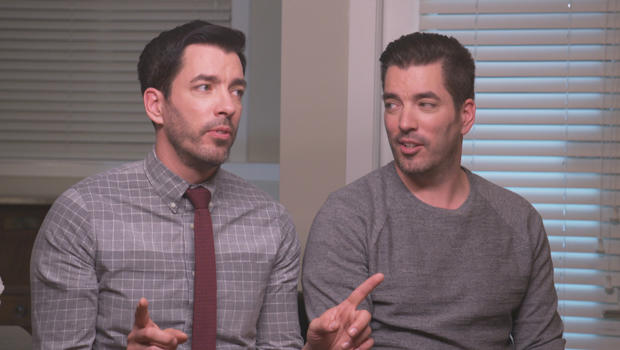 Jonathan and Drew Scott are identical twins who, for the last eight years, have been the reigning princes of TV home renovation. They are the stars of the HGTV series, "Property Brothers."

Not to mention their spin-offs, including "Buying and Selling," "Brother vs. Brother," "Property Brothers at Home," "At Home on the Ranch," and "Drew's Honeymoon House," and their furniture line, Scott Living.

The secret to their success? According to them, the fact that they're just nice guys having fun.

Another Secret? "We know that slow-motion renovations in tight jeans make for a great episode," said Drew.

For those who aren't familiar with their story, Jonathan is the contractor in the flannel shirt; Drew is the realtor, usually wearing a tie.

Jonathan is the older one, by four minutes. Drew admitted, "I did sit on Jonathan's head in the womb for nine months."

"He's always had a cheek up on me," Jonathan added.

Drew is taller, by a quarter-inch. "But I'm smarter," said Jonathan.

Drew is married to Linda, who also appears on the shows, while Jonathan is single.

"The worst is, a friend will invite me over, and she'll say, 'Hey, you've been working so hard, I'll make you dinner, it'll be great.' I'm like, 'That's so sweet! Thank you!' And I'll come over, and she's got hardwood samples laid out! She's using me!"

One of their latest ventures is a children's book, "Builder Brothers: Big Plans." Their book signings are fun, part stand-up, part story-telling, and very entertaining.

Correspondent Michelle Miller said, "The first thing that goes through my mind is, it's not the kids that are really into this, but maybe I'm wrong?"

"Did you see the kids in the audience? You're wrong!" Drew laughed.

So, where did this wholesome, amusing, wildly successful and entrepreneurial matched-set come from? The foothills of the Canadian Rockies, just outside of Calgary, Alberta.

"We lived in a postcard," Drew said.

"This was so much fun, building forts, just getting out and exploring – every day a clear, blue sky," said Jonathan.

Actually, the twins were born a few hours west of here, in Vancouver. The fact they were twins was a surprise. "I was in the delivery room when Jonathan was born," said their dad, Jim Scott. "And while the doctor was clearing out his throat, the nurse said to him, 'Doctor, I think there's another baby here.'"

Joanne and Jim Scott went with it, and no parents could be prouder.

"There was never a dull moment with those guys," Jim said. "Actually, when they were seven, they started their own business."

"'Cause you told them they had to get a job – 'Gentlemen, time for you guys to go find some work,'" said Miller.

"They called their business JAM Enterprises [for John, Andrew and Mum]. And they had these wire hangers which they covered with a silk material, and their motto on their business card was, 'We take care of your hang-ups.'"

Drew said, "Jonathan and I have a lot we wanted to accomplish. I love acting and directed. And Jonathan loved magic. Whatever we were passionate about, our parents supported us."

Even when they failed, which they did occasionally.

"The first time I had my dreams crushed was when I was scammed and somebody stole all of my magic props," said Jonathan. "I was a teenager and I had put all my money into that. I had literally wanted to be the next David Copperfield. And that was all taken away."

Joanne said, "I don't think there's anything wrong with having a failure. It's whether you get yourself back up on your feet."

Or as Jim might say, "Back in the saddle." And in the Scott family, that's not just a figure of speech. Jim Scott was a real cowboy, who followed his dream from Scotland, and taught his family the cowboys' "Code of the West." Among its tenets: "Live each day with courage. Take pride in your work. Ride for the brand."

"What does that mean in terms of your family?" asked Miller.

"We all ride for the brand in this family!" Jim said.

One for all and all for one! All the members of the Scott family have appeared on the brothers' shows. Brother J.D. is a regular.

Miller asked, "Why are you still doing it? Is it your success keeps moving you along?"

Jonathan said. "I think we just have too much fun. We don't want to stop. And it's like a big family. All our crew, everybody else, they've been with us for a long time."

In reality, not just on reality TV, they all just like each other a lot.