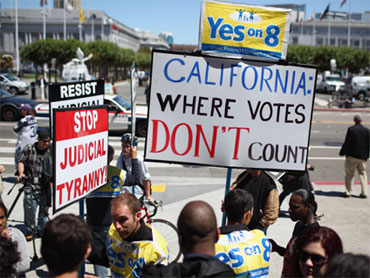 The sponsors of California's gay marriage ban have asked an appeals court to stop a federal judge's order allowing same-sex weddings to begin next week.

The lawyers defending Proposition 8 asked the 9th U.S. Circuit Court of Appeals late Thursday to impose a stay that would halt gay marriages while the court considers the judge's ruling that struck down the ban.

Walker then said same-sex couples could begin marrying next Wednesday, unless the appeals court steps in. That decision raised hopes among same-sex couples that they soon will be able to tie the knot after years of agonizing delays.

"I am optimistic this decision will be overruled, probably by the Supreme Court if not by the American people," Proposition 8 supporter Maggie Gallagher of the National Organization for Marriage told CBS News. "The majority of the American people have kind of drawn a line in our sand and said, 'This isn't true. It's not good. We don't believe in it, and we don't like it."

"For the second time in two weeks the judge noted that supporters of Proposition 8 simply didn't convince him with any evidence of why the stay should have been granted, and that's why he denied it," said Cohen. "He said that the facts have been clear and that folks who are against same-sex marriage were unable to convince him that it should be blocked pending this review."

Gay couples lined up at city halls and clerks' offices all across California expecting the stay to be lifted. After Walker's ruling, San Francisco Mayor Gavin Newsom urged patience.

"People will be fine," Newsom told CBS Radio News. "Obviously, some disappointment that they couldn't come today, but this gives people time to call friends and family and organize, and I imagine there will be a lot of proposals in the next week."

Teresa Rowe and her partner Kristin Orbin, both 31, said they were still happy with the decision even though the ceremony didn't happen.

"It's sad that we have to wait a little longer, but it's been six years," Rowe said.

"It's a really sad day for Californians, for families, for our future and for voters that a federal judge has trampled on the civil rights of voters," said Luke Otterstad, 24, of Sacramento.

Opponents of same-sex marriage said they want Proposition 8 to stay in effect until their appeal of Walker's ruling is decided by higher courts.

They have argued in court papers that resuming gay marriage now would cause legal chaos if the U.S. 9th Circuit Court of Appeals or U.S. Supreme Court eventually reverses Walker's ruling.

But Walker said such weddings would appear to be legal even if the ban is later reinstated. He pointed to the 18,000 same-sex couples who married legally in the five months that gay marriage was legal in California as proof.

Walker also said that no one can claim harm by allowing same-sex weddings to go forward, but banning them harms gays.

In Walker's 136-page decision last week, he said gay marriages should begin immediately, but he agreed to suspend weddings until he could consider the legal arguments.

"I am pleased to see Judge Walker lift his stay and provide all Californians the liberties I believe everyone deserves," Schwarzenegger said Thursday.

Walker said on Thursday that ban proponents didn't convince him that anyone would be harmed by allowing same-sex marriages to resume.

"The evidence at trial showed, however, that Proposition 8 harms the state of California," Walker said.

Santa Cruz County Clerk Gail Pellerin, president of the California Association of Clerk and Elected Officials, said county agencies that issue marriage licenses would be ready to serve same-sex couples whenever they get the green light.

Before deciding the case, Judge Walker heard 13 days of testimony and arguments.

Defense lawyers argued that the ban was necessary to safeguard the traditional understanding of marriage and to encourage responsible childbearing.

The judge dismissed the notion that gay Americans were seeking a new right as opposed to one already guaranteed them under the Constitution.

He said that preventing gays from marrying does nothing to strengthen heterosexual unions or serve any purpose that justifies the ban's discriminatory effect.