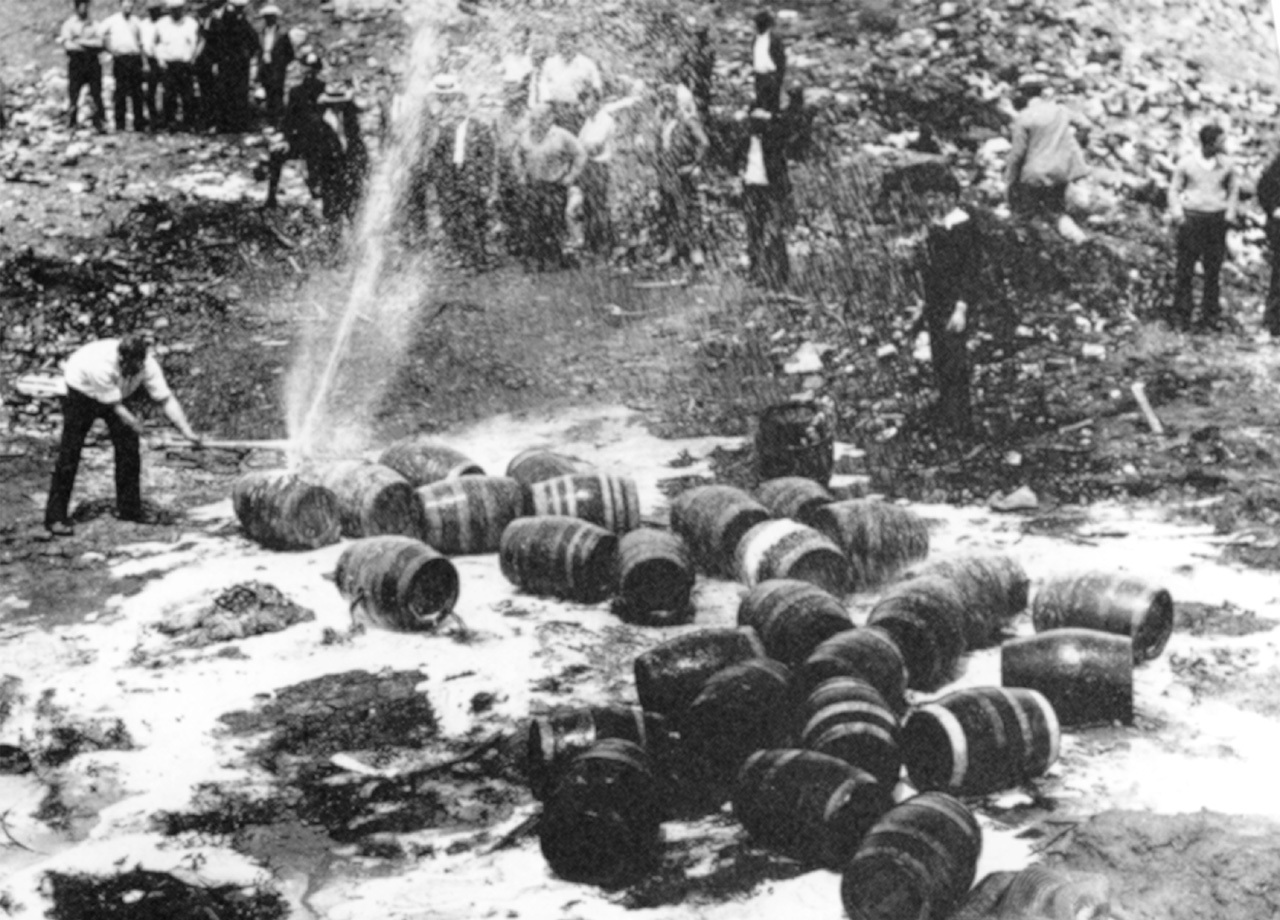 Prohibition was the so-called "noble experiment" which had some rather ignoble consequences ... as Mo Rocca will remind us:

What do they all have in common? They're the results - direct and indirect - of Prohibition, the nearly 14-year period from 1920 to 1933 when the manufacture, sale or transportation of "intoxicating liquor" was illegal in this country.

The nightclub - the "speakeasies" of the time of Prohibition - led to the nightclubs of modern times. The speedboat made its debut during Prohibition; it was the transport mode of choice for crime groups smuggling liquor into the United States across the Great Lakes and other bodies of water.

"Booze cruises" would take passengers beyond American territorial waters - and out of the reach of the law - so that patrons could enjoy alcoholic beverages.

Before the era of Prohibition (which took effect about the time the 19th Amendment gave women the right to vote in 1920), saloons were largely a "men only" affair. Speakeasies, on the other hand, were frequented by men and women alike. Jazz was often provided as entertainment at these clubs, dancing was common, and - as more and more women frequented these establishments - powder rooms became de rigueur.

Since much of the illegal liquor sold in the United State during the time of Prohibition was less than top quality, mixed drinks... cocktails ... grew in popularity, allowing bartenders to mask the taste of poor quality booze with juices and other beverages.

"Why do you love the story so much?" Rocca asked Daniel Okrent, author of "Last Call: The Rise and Fall of Prohibition."\

"It's the answer to that question, how the hell did that happen?" he replied. "I mean, it's just so improbable. How did this freedom-loving country put into the organic law, into the Constitution, this unbelievable stricture that said that you can't have a glass of beer? It's really hard to believe."

Part of the reason was simply that Americans liked to drink ... a lot.

"This country was very, very drunk," Okrent said. "In 1830 the average American over 15 years of age drank 7.3 gallons of pure alcohol a year. That's the equivalent of 90 fifths of 80-proof liquor, 1.8 bottles per week for every drinker in the country."

"We shouldn't forget that alcoholism is a serious social problem. It was a social problem in the 19th century which prompted Prohibition, it is today" said filmmaker Ken Burns.

Burns and producer Lynn Novick have collaborated on documentaries about jazz and baseball. In their newest film, airing tonight on PBS, they take on Prohibition.

Prohibition was billed, they point out, as the "one-size-fits-all" cure for the ills of American society.

With so many problems to address, it's not surprising that the Dry coalition was dizzyingly diverse.

Suffragettes who originally wanted the vote so they could outlaw demon liquor ... small town Protestants threatened by the wave of Catholic immigrants and their city saloons ... the Ku Klux Klan, who exploited the pernicious stereotype of the dangerous black man with a bottle ... even Broadway producers who wanted patrons out of bars (and in their theaters).

It was, Rocca noted, the epitome of strange bedfellows.

Okrent agreed: "If you can imagine a very large bed that accommodates, you know, some guy wearing a KKK uniform, somebody from the Industrial Workers of the World, Jane Addams, and J.J. Shubert of the theater chain, that's a very strange set of bedfellows."

"Is it true that the KKK supported women's suffrage?" asked Rocca.

"The KKK supported it because they knew that women would support Prohibition," Okrent said.

But who could possibly wrangle this crazy quilt coalition?

"I think it's clear that ASL was the most powerful lobbying group pressure group," Okrent said. "They actually made a constitutional amendment happen."

The ASL - or Anti-Saloon League.

Okrent said that what made them effective was, "They said to you, 'I don't care what you think about whether babies ought to be slaughtered or whether we should start wars. We don't care about any of those things at all. You're with us on our one issue.

"They were not party-affiliated. And they in fact had very strong influence in both parties by design. The organization that's most like them today is the NRA. One issue, that's all we care about.

And the League's seat of power? Not New York ... not Washington ... but Westerville, Ohio.

At its headquarters, the League employed 200 people in a state-of-the-art printing operation that generated 40 tons of propaganda a month. Madison Avenue, take note.

Or, "Shall the mothers and children be sacrificed to the financial greed of the liquor trade? It's up to you to decide."

The message was clear ... even if the facts sometimes weren't.

One ASL poster read, "Do you know one insane person in every four owes his insanity to drink?"

"They linked the Germans to the brewers," Thomas said. "People had it in the back of their heads that it was un-American."

Though the brewers and distillers had vast financial resources, they were inept campaigners.

An ad extolling the virtues of beer shows a baby with a beer stein.

"Yeah, the brewers wanted to separate themselves from the distillers," explained Okrent. "They maintained that gin and whiskey - that was horrible, poisonous stuff - whereas our beer was healthy. They actually called it liquid bread."

The Drys had the Wets over a barrel, and the 18th Amendment went into effect at midnight on January 17, 1920.

And how soon did it become clear that it was not going to work?

"One could say it didn't work by around 2:00 a.m. on January 17th," Okrent laughed. "I think that the general feeling was in the first year that it could work and that it was working. But as people found ways to exploit the loopholes, and criminality expanded, as the saloons were able to turn themselves into speakeasies and all you needed to do was bribe a local cop or judge, these things began to snowball as early as 1921, 1922."

But the ultimate buzzkill?

"It really is the Depression,' said Novick, "this incredible crisis that, I think, made America kind of take another look and say, 'Wait, what are our priorities? Is this really that important? We're spending all this money to enforce a law that nobody wants?'"

Drinking did decline 70 percent from pre-Prohibition levels in the first few years. But the Drys were up against something even more powerful than money:

"What you can't successfully legislate against is human appetite," said Okrent. "If people want something, they're going to find a way to get it."

On December 5th, 1933, the 21st Amendment passed, ending Prohibition - the only time in history an amendment has been repealed. The noble experiment was over.

"It was a failure by any measurement, but positive in its failure," said Okrent. "We learn from our failures. We learn, 'Let's not try this again.'"

"Every day a holiday" on the National Day Calendar