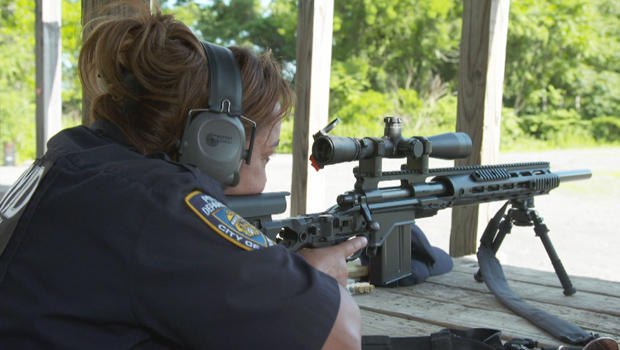 In our series, "Profiles in Service," we highlight Americans who dedicate their lives to helping others.

The New York City Police Department's elite Emergency Service Unit (ESU) is like a SWAT team, handling a wide range of scenarios, from hostage situations, to rescues and presidential security. Detective Tina Guerrero is one of the roughly 500 ESU members, only 10 of whom are women. She is also the only female counter-sniper in the NYPD.

"CBS This Morning" co-host Norah O'Donnell recently met up with Detective Guerrero and joined her team on a training exercise to the top of the Brooklyn Bridge.

From 100 yards away, Detective Tina Guerrero fires her Remington 700 M24 rifle, consistently hitting her target. How good a shot is she? "I would say I'm pretty good," she replied.

"I've heard you say that ESU is like a big boys' playground and you wanted to play in it?" asked O'Donnell.

"Yeah. The challenge of just being able to go out there and do all the things that all these guys were doing was something that I wanted to do. I did feel that I had to prove myself, as other women do – and other men do, too," she said.

The men and women of the Emergency Service Unit endure rigorous training to respond to everything from search-and-rescues to hazmat situations and terrorist attacks.

How to start working out after quarantine

"When I tried out for the team, I was very intimidated," Guerrero said. "But I said, you know, 'Go out there and do the best you can.' And I did. And I remember getting a phone call from one of the other guys that I work with. And he said, 'Listen, for what it's worth, you did well.'"

Well enough to trade in her undercover work in the vice squad for scuba gear and a 50-pound vest.

As a member of ESU, Detective Guerrero has to prepare for any scenario, including suicidal jumpers.

"CBS This Morning" joined the team on a training exercise, climbing nearly 280 feet to the top of the Brooklyn Bridge.

The team looks out for each other as they climb the nearly-6,000 foot suspension bridge that connects Manhattan and Brooklyn, using carabineers to harness themselves so that they're always tied in.

Detective Guerrero's husband is also in ESU, though the duo rarely work together.

The mother of three works overnights to spend more time with their children, though she misses a lot of their activities.

"I do it because I just love being out there," Guerrero said, "I try not to think about, you know, the dangers of it. There's not a night goes by that the guys I work with, I know that they're looking out for me, as I do the same for them."

Guerrero reflected on her journey to the NYPD's version of SEAL Team Six, where she admits there were some men in the unit who said, "I don't think this woman can do it."

"Yeah. I believe when I first came into the unit, that I proved a few people wrong!" she laughed. "I definitely believe that. They're retired now, though."

O'Donnell asked, "And how did you disprove the doubters? Because this is a really rigorous job."

"How did I disprove them? I'm still here. I'm still doing it."

"I love it. I'm out on patrol every night. Wouldn't change it for the world."

O'Donnell asked, "What does service mean to you?"

"You do it because you love it, but it ain't easy. It's hard hours, time away from your family, and you risk your life every day," O'Donnell said. "But it's worth it?"

More from "Profiles in Service":