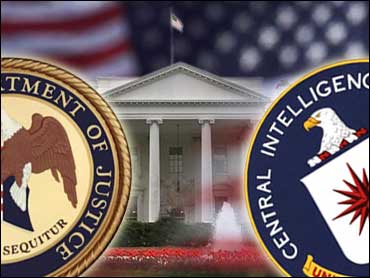 A federal grand jury probing the leak of a CIA officer's identity has subpoenaed the records of phone calls from Air Force One, the president's plane, made the week before the name of the officer was published in a July newspaper column, Newsday reported Friday.

The three subpoenas to President Bush's Executive Office also seek the July records created by an internal task force called the White House Iraq Group, which was created to publicize the threat of Saddam Hussein, Newsday said. The newspaper cited documents that it obtained.

In addition, it said, the grand jury wants records of White House contacts with more than two-dozen journalists and news organizations.

The subpoenas were issued to the White House on Jan. 22, Newsday said. The grand jury is trying to find out whether there were violations to a federal law that prohibits the intentional disclosure of the identity of an undercover agent by officials with security clearances.

The investigation stemmed from concerns that officials in the Bush administration had divulged the name of CIA officer Valerie Plame to discredit her husband, former ambassador Joseph C. Wilson IV, because of his criticism of the administration's Iraq policy.

"The president has always said we would fully comply with the investigation, and the White House counsel's office has directed the staff to fully comply," White House spokesman Erin Healy told Newsday.

Two of the subpoenas are focused on July White House events, contacts and records around the time of a July 14 column by syndicated columnist Robert Novak that said senior administration officials told him Plame was a CIA officer.

Wilson had a few weeks earlier emerged to report that he had personally investigated the U.S. allegation that Iraq tried to buy uranium from Niger, and found no substantiation for it.

A third subpoena is a repeat of a Justice Department request to the White House that sought records about staff contacts with Novak and two Newsday reporters.

White House staff records also were sought regarding contacts with several other news organizations including The Associated Press, The Washington Post, Time magazine, NBC, The New York Times and The Wall Street Journal, Newsday said. There has been no record of journalists being subpoenaed.

At least four current and former officials involved in the White House communications operation have testified before the grand jury, according to people familiar with the probe.

One person close to the investigation said that Levine was questioned mainly about White House press office procedures.

A number of other current or former officials have been interviewed by the FBI, including top Bush political adviser Karl Rove, communications chief Dan Bartlett, former spokesman Ari Fleischer and Cheney spokeswoman Cathie Martin, said two sources who spoke on condition of anonymity.

The Washington Post reports the FBI has also talked to Cheney chief of staff I. Lewis "Scooter" Libby, along with Levine, Matalin and McClellan.

The Post reports the FBI has conducted aggressive questioning covering White House emails that were turned over to the investigators, cell phone calls, phone logs and even specific conversations with reporters.

Investigators earlier tried to encourage journalists to talk by asking White House staff to sign waivers freeing reporters of any promises of confidentiality. But according to The Post, most officials were advised by the lawyers not to sign, and did not.

President Bush made the Niger allegation in the Jan. 28, 2003 State of the Union speech, saying, "The British government has learned that Saddam Hussein recently sought significant quantities of uranium from Africa."

That was only one of several occasions that same month where the administration made a similar claim. The Post reports the claim was repeated on at least six occasions around the time of the State of the Union speech.

After Wilson came forward in July, the White House retracted that allegation. Wilson now is working as a foreign policy adviser to Democratic presidential candidate John Kerry and has made several campaign appearances for the Massachusetts senator.

After a request from the CIA, the Justice Department launched an investigation into the leak on Sept. 30.

Attorney General John Ashcroft removed himself in December from the inquiry to avoid the appearance of a conflict of interest. Democrats had called on Ashcroft to step aside from the investigation from the outset. U.S. Attorney Patrick J. Fitzgerald of Chicago, a career prosecutor, is leading the probe.