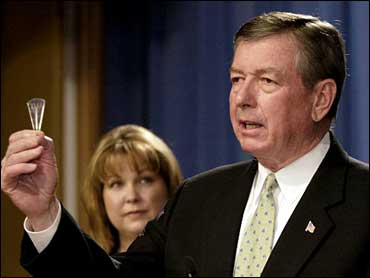 With defense lawyers stepping up challenges to genetic evidence, the Justice Department inspector general is examining the FBI lab unit that analyzes DNA in hundreds of cases a year after a technician was caught failing to follow proper procedure.

The inquiry, expected to last several more months, already has led to changes inside the lab's DNA unit in response to advice from outside scientists brought in by Justice investigators, government officials told The Associated Press.

The inspector general, an independent watchdog, is trying to identify any vulnerabilities in the lab after an FBI technician went undetected for two years as she failed to follow required procedure in analyzing DNA evidence, said the officials, speaking on condition of anonymity.

DNA evidence has become increasingly important in criminal cases and in appeals from old convictions before such biological evidence was widely used.

The investigation, coupled with recent revelations of DNA irregularities in a few local crime labs that work with the FBI, could affect Attorney General John Ashcroft's project to create a national DNA database to help law enforcers identify crime suspects through their genetic fingerprints.

Criminal defense lawyers are planning challenges to the database and to DNA evidence in cases involving the FBI lab technician or the local crime labs accused of wrongdoing.

"All of us are depending on DNA as a gold standard in forensics work — innocence projects, prosecutors and defense lawyers. And now we don't have a gold standard. The gold has been tarnished," said Frederic Whitehurst, a lawyer and former FBI lab employee whose whistle-blower allegations led to major changes in the lab in the mid-1990s.

The AP reported this month that FBI lab technician Jacquelyn Blake quit while under investigation for failing to follow required scientific procedures while analyzing 103 DNA samples over the past couple of years, and a second lab employee was indicted for allegedly providing false testimony.

The officials said the goal of the investigation is to identify vulnerabilities in lab procedure that could affect the quality of the FBI's DNA analyses or permit a rogue employee to go undetected.

Adams told lawmakers and their staffs the DNA section has put changes in place to deal with issues raised by the outside scientists brought in by the inspector general, the officials said.

"We want correct and unassailable results and objective testimony, and to do that we've got to be open to outside scrutiny and outside review," Adams told the AP.

The investigation is the broadest inspector general's review of the FBI lab since one concluded in 1997 that scientists in the lab's explosive units engaged in bad science and gave inaccurate testimony. Those findings led to an overhaul of the world-renowned forensics facility.

FBI officials also are facing questions about how to protect the bureau's national DNA database from a growing number of problems at local police crime labs.

The police lab in Houston is under grand jury investigation for its DNA work. A police lab in Fort Worth, Texas, is facing a criminal inquiry after revelations that a senior forensic analyst ignored proper DNA procedures. Florida is grappling with a state crime lab worker in Orlando who falsified DNA data.

FBI officials have pulled DNA samples from the Houston lab from its national database and said they will examine the allegations involving Fort Worth and Orlando to determine if any action is required to protect the national DNA registry.

The inspector general has pressed the FBI to conduct regular audits of state and local labs that put DNA evidence into the national registry. An audit in 2001 disclosed half the local labs examined were not in compliance with FBI DNA standards.

"No such audits of the DNA profiles in CODIS (the Combined DNA Index System) were being conducted at any level," the inspector general's report said.

"The FBI needs to improve its oversight ... to ensure the laboratories are in compliance with the act, the FBI's quality assurance standards and the FBI requirements for laboratories participating in the national index," it said.