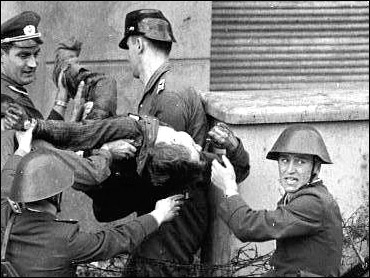 Two former members of the body that ruled communist East Germany were found guilty Friday of failing to prevent shooting deaths at the Berlin Wall and sentenced to probation in what is likely to be the last trial of its kind.

Nearly 15 years after the wall fell and the regime crumbled, Hans-Joachim Boehme, 74, and Siegfried Lorenz, 73, walked out of the Berlin state court as free men, but were convicted of being accessories to murder in three wall deaths in 1986-89.

Both were deemed essential decision-makers in the communist-era Politburo, which was responsible for the shoot-to-kill policy for guards who spotted anyone trying to cross the barrier from East Berlin to the West.

About 1,000 people were killed trying to cross the Berlin Wall and other heavily fortified stretches of Germany's east-west border between 1961 and the 1989 fall of the Wall.

Prosecutors picked three shootings for the case against Lorenz and Boehme — including the February 1989 death of Chris Gueffroy, 20, the last person to be fatally shot before East Germany opened the 103-mile wall on Nov. 9, 1989.

Boehme and Lorenz each received a year of probation. Defense lawyers had sought acquittals.

Hundreds of former East German border guards and officials have been convicted since German reunification in 1990 for shootings along the former border. Most received suspended sentences, though a few former leaders were sent to jail.

Egon Krenz, East Germany's last Stalinist leader who allowed the historic opening of the wall during a brief seven weeks in power, was released in December after serving nearly four years of a 6½-year term for condoning shooting deaths at the wall.

Krenz has maintained his innocence, arguing all the way to the European Court of Human Rights that stopping citizens from fleeing the communist country broke no East German law.

Boehme, Lorenz and a third man, Herbert Haeber, 73, were cleared in July 2000 by a Berlin court that ruled that they could not have stopped the policy.

But a federal court overturned the verdict in 2002 and ordered a retrial, saying they were guilty of crimes even under East German law — whose provisions were applied in Friday's ruling.

Marianne Birthler, a former East German democracy activist, said the trials of former leaders were "a very important chapter in clearing up" the legacy of 40 years of communist dictatorship.

"If you lost family members at the Wall, then you are probably less concerned about severe punishment than about having it determined with authority that this was wrongdoing," she said in a radio interview before the verdict.

Boehme was the local head of the Socialist Unity Party, East Germany's communist party, in the city of Halle. Lorenz was the party chief in Karl-Marx-Stadt, now renamed Chemnitz.

Both of them were guilty of "failing to work toward having the inhuman order to shoot at the Berlin Wall lifted, eased or no longer implemented," Presiding Judge Thomas Gross said in Friday's verdict.

For his part, Haeber was found guilty of manslaughter in May but was set free under a former East German law that allows for a conviction without a sentence.

East Germany built the wall in 1961 to stop an exodus of young, skilled workers and other citizens to West Berlin. The barrier cut off train routes and roads, including passage through the Brandenburg Gate along its most notorious 27-mile stretch through the capital's center.

In many places, it consisted of two parallel concrete walls about 12 feet high, with watchtowers, armed guards and dogs. A heavily guarded fence also ran along East Germany's 866-mile border with the rest of West Germany.
By Tony Czuczka