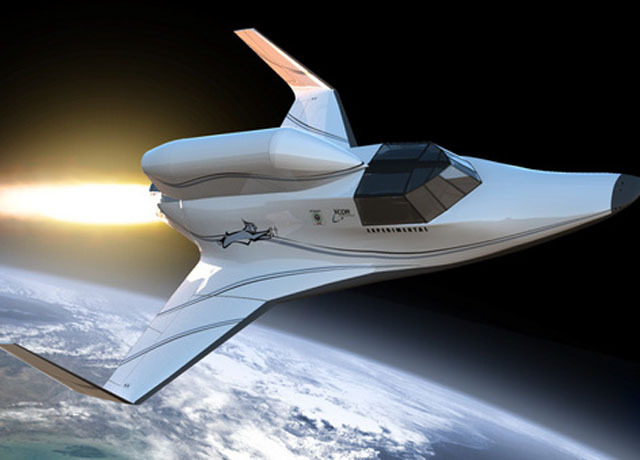 The Aug. 23 announcement at KSC's Visitor Complex is the second expansion plan unveiled by XCOR in as many months. The privately held firm, currently based in Mojave, Calif., will relocate its headquarters and set up a research and development center in Midland, Texas, leaving only an operations center, and possibly some flight test activities, in Mojave.

"I love Mojave, and it's a fabulous place to do R&D and I expect it will be a fabulous place to operate, but ultimately we are running a business and where we decide to put different aspects of the business in the long term has to be based on where we find the best business conditions. It's a complicated weighing of all the factors involved but ultimately we decided it that it was time to move the R&D operation of the company somewhere and Midland is the place that we chose.

"For many, many years it has been our plan to establish the routine manufacturing operations, serial production of both vehicles and engines, at a site that was not the same site as where our R&D site was. For a number of reasons, Florida looked like a very good candidate for that," Greason said [Photos of XCOR's Lynx Space Plane]

XCOR and NASA are working through Space Florida, a state-backed economic development agency, to iron out an agreement that would allow XCOR to build a manufacturing facility and fly from Kennedy Space Center's Shuttle Landing Facility (SLF).

"Up until now, Kennedy Space Center and Cape Canaveral have been known for launching rockets that carry satellites and NASA people. We want the Space Coast to be known as the place where any person who wants to launch in America comes here," NASA Administrator Charles Bolden told reporters during a tour of launch facilities and spacecraft processing hangars after XCOR's announcement.

NASA earlier this month issued a request for proposals from companies wanting to make use of the 4,500-meter runway, part of the spaceport's ongoing transformation from a shuttle operations base to a mixed-use facility supporting government, commercial and military space and aviation programs.

"We're trying to work with the state of Florida and the various economic development councils to bring business back to the Space Coast. My hope is that we'll make it even more robust than it was before," Bolden said.

XCOR, like Virgin Galactic and a handful of other firms, intends to fly tourists, researchers and payloads into suborbital space, reaching altitudes of about 100 kilometers before returning through the atmosphere.

Both companies also aspire to fly orbital spacecraft as well, another factor in favor of Florida, which is well-positioned for orbital launches, Greason said.

XCOR expects to begin test flights of its two-seat Lynx Mark 1 prototype by early 2013 in Mojave and to fly in Florida a year later.

The company also plans to set up a second operations base at the newly created spaceport at Cecil Field in Jacksonville, Fla. By the end of 2018, XCOR expects to employ about 150 Lynx technicians and engineers in Florida. It already has reservations for about 200 flights, which cost $95,000 apiece.

Virgin Galactic, which has begun testing its six-passenger, two-pilot SpaceShipTwo suborbital vehicle, is charging $200,000 per seat and has more than 535 reservations.

"It's always been our business plan that there be many different operating sites," Greason said.

This article was provided by Space News, dedicated to covering all aspects of the space industry.

Why humans and elephants take same time to poop