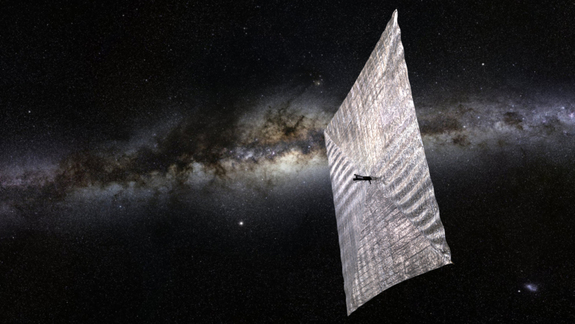 Nine years after a rocket failure destroyed its solar-sailing spacecraft, the Planetary Society -- the nonprofit space advocacy group led by scientist and popular TV host Bill Nye -- is ready for another try.

On July 9, the Planetary Society announced launch dates for its LightSail-1 spacecraft -- a possible test flight in 2015 (LightSail-A) and a full mission the next year (LightSail-B) with nearly identical hardware. Both solar sail missions operate under the LightSail-1 designation.

LightSail-B will steer in Earth's orbit using nothing more than radiation from the sun. Made up of three miniature CubeSats, it will launch aboard SpaceX's Falcon Heavy rocket, which has yet to be flown. The four sails will ride inside the CubeSats until they're ready to be unfurled, several weeks after liftoff. [Photos: Solar Sail Evolution for Space Travel]

LightSail-B will be boosted to medium-Earth orbit inside another spacecraft called Prox-1, a Georgia Institute of Technology project. Prox-1 will spit LightSail out and remain nearby to watch the spacecraft unfurl. (LightSail-A, meanwhile, would only reach low-Earth orbit in a mission designed to show how well the craft operates in space.)

The sails themselves should be visible to the naked eye from Earth; they cover 344 square feet (32 square meters), Planetary Society representatives said.

LightSail-1 is a successor to the society's Cosmos 1, which failed to reach orbit aboard a Russian Volna rocket in 2005. It ended up falling into the Barents Sea -- an Arctic sea located off the northern coasts of Norway and Russia -- the very location where it had launched by submarine.

The Planetary Society sees solar sailing as a vast improvement over traditional spacecraft, which require expensive fuel and engines to perform maneuvers in space. Sailcraft instead use solar radiation to increase their speed.

This is a gradual pressure that takes more time to move spacecraft, but Nye said he sees this as a more sustainable way to explore the solar system.

"You can trade money for time," Nye said during the launch-date announcement event, which was webcast. "If you have time, you can send these things, hypothetically, to extraordinary distances in the solar system. And you wouldn't send one -- you'd send an armada."

The Falcon Heavy has not left the ground yet, but its first test flight is expected to happen in 2015.

Should LightSail-A go forward, the Planetary Society plans to launch it as a secondary payload on a smaller Atlas V rocket in May 2015, and it would only reach low-Earth orbit.

This area has too much atmosphere to use the sail properly, but a systems check would be possible, according to the Planetary Society. The sail would be part of a mission of NASA's Educational Launch of Nanosatellites (ELaNa) program for CubeSats, the society wrote on its website.

"The spacecraft will deploy its sails, capture images and communicate with the ground, giving engineers a chance to work through any problems en route to a full-fledged solar sailing flight," wrote Jason Davis, the society's media producer.

The cost of the missions is pegged at $4.5 million, Davis said in a tweet to Space.com Wednesday. About $4 million has been raised already, and the society will do further fundraising for the remainder in the next two years.

The launch dates may be delayed as development of the spacecraft and SpaceX rocket proceed.

There have been other projects to put solar sails in space. Notably, Japan's Ikaros probe successfully launched in 2010 and flew by Venus, making it the first interplanetary solar sail.