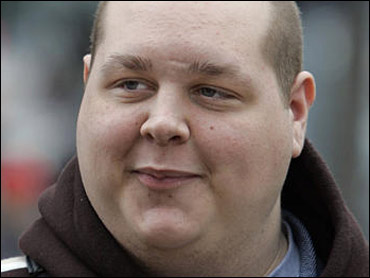 A teenager was sentenced Friday to 1 1/2 years in prison for unleashing an Internet worm that crippled 48,000 computers in 2003.

Jeffrey Lee Parson, 19, of Hopkins, Minn., will serve his time at a low-security prison and must also perform 10 months of community service.

He could have gotten 10 years behind bars, but the judge took pity on him, saying his neglectful parents were to blame for the psychological troubles that led to his actions.

The Internet "has created a dark hole, a dungeon if you will, for people who have mental illnesses or people who are lonely," U.S. District Judge Marsha Pechman said. "I didn't see any parent standing there saying, `It's not a healthy thing to lock yourself in a room and create your own reality."'

Defense attorneys said that Parson feared leaving the house and that his parents provided little support. He pleaded guilty last summer to intentionally damaging or attempting to damage a protected computer.

Parson created a variant of the Internet worm called Blaster. It attacked a Microsoft Windows update Web site as well as personal computers. Blaster and its variants have crippled networks worldwide.

Parson's lawyers said that since his arrest, he has made a Seattle school district a video warning teens of the dangers of Internet vandalism.

Parson apologized to the court and to Microsoft, saying, "I know I've made a huge mistake and I hurt a lot of people and I feel terrible."

He will have to pay restitution to Microsoft and to people whose computers were affected. The amount will be determined at a hearing next month.

Parson was charged in Seattle because Microsoft is based in suburban Redmond.