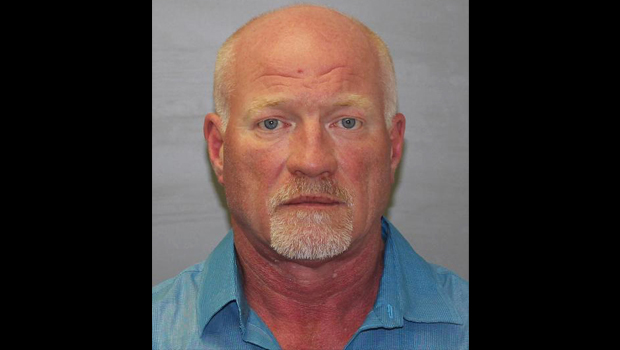 DANNEMORA, N.Y. -- Another arrest was made Wednesday evening in connection with the escape of two convicted killers from an upstate N.Y. prison, CBS News has confirmed.

Clinton Correctional Facility guard Gene Palmer, 57, was charged with promoting prison contraband, two counts of tampering with physical evidence, and one count of official misconduct, according to the New York State Police. He pleaded not guilty at an arraignment Wednesday night and was ordered held on $25,000 bail.

Palmer was suspended from his job Friday and questioned by investigators about the June 6 escape by Richard Matt and David Sweat.

A second prison employee, tailor shop instructor Joyce Mitchell, 51, is being held on the felony charge of promoting prison contraband and a misdemeanor count of criminal facilitation. Her attorney pleaded not guilty on her behalf.

Mitchell was accused of helping the inmates break out, smuggling hacksaws and tools though a shipment of frozen hamburger meat. Palmer told officials that he knew nothing of any such contraband.

Palmer allegedly took the frozen meat embedded with the tools to the inmates' cell area, Clinton County District Attorney Andrew Wylie told CBS affiliate WCAX-TV. According to Wylie, Palmer acted at the behest of Mitchell who put the tools in to the meat and brought them in to the prison,.

Gene Palmer's lawyer, Andrew Brockway, told WCAX his client has worked in the honor block for 28 years and knows both escaped convicts. Brockway did not comment on whether or not any prison rules were broken.

Prior to the arrest, Palmer had spoken of returning to his job.

"He definitely loves his job, he loves his co-workers, he wants to make sure this is solved quickly and safely so he can get back to work," said Brockway

Meanwhile, the search for the convicts has entered its 19th day. Over the weekend, officials had moved their search to Allegheny County in western New York, along the Pennsylvania border.

But the manhunt moved again, centered on the Owls Head region of Franklin County, N.Y., after DNA found in a nearby cabin was linked to the fugitives.