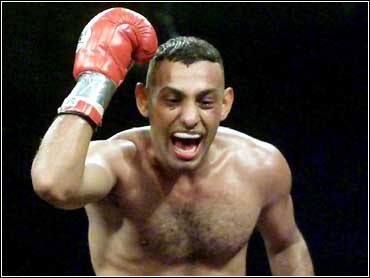 Prince Naseem Hamed retained his WBO featherweight title Saturday night, sending Augie Sanchez out of the ring on a stretcher after stopping him at 2:34 of the fourth round.

"That was an exciting night. It was full of drama and excitement," Hamed said. "I just hope there's nothing wrong with him."

Sanchez launched a surprising attack in the second and sent Hamed to the canvas three times, though none was ruled a knockdown. Hamed laughed it off, bobbing away from Sanchez with his torso before countering in the fourth.

With Sanchez's right eye swollen, Hamed hit him with a three-punch combination in the fourth that sent him staggering to the floor. Sanchez tried to get up before falling back into the ropes; referee Michael Ortega immediately stopped the fight.

Doctors swarmed the ring and loaded Sanchez onto a stretcher. He was taken to the trauma center at Backus Hospital in Norwich; Dr. Joseph Carpentieri said he probably suffered a concussion.

Ring announcer Michael Buffer announced to the crowd that Sanchez was wide awake and carried out as a precaution.

"Sanchez was very lethargic and slow to respond to commands," chief ringside physician Michael Schwartz said. "He was talking with slurred speech. His pupils were sluggish."

Hamed (35-0, 31 KOs) was a heavy favorite over the WBO's No. 7 contender, but he was hurt badly in the second round. Ortega ruled the first fall a slip, but it energized the crowd in support of Sanchez, and it began chanting "Augie! Augie!"

Hamed slipped again, but he was back up in a flash and connecting with a left, that sent Sanchez staggering back to the ropes.

Sanchez (26-2, 23 KOs) came out strong again in the third, knocking Hamed around. But Hamed, bleeding from his mouth, cheek and left eye, laughed it off, bobbing away as if he was toying with the challenger.

In the third, after Sanchez slipped, Hamed kept coming and bowled him over with his legs. Early in the fourth, Hamed hit Sanchez on the ground another slip and lost a point.

"I felt my feet were off balance, but I thought he should have gotten the knockdown," Hamed said. "I have a chin and two hands, just like anyone else. He hit me and he hurt me a couple of times, but I got up and knocked him out."

Known for his elaborate entrances, Hamed did not dissapoint.

Although he took only about five minutes to make his way to the ring - past performances have lasted closer to 15 minutes - his arrival was heralded with bursts of fire, Arabic chanting, lasers and firecrackers.

Wearing his usual leopard-spotted trunks, Hamed danced his way to the ring, then did his trademark flip over the ropes and into the ring 4 minutes, 33 seconds after the music started.

Not to be outdone, Sanchez known as "Kid Vegas" arrived with four Elvis impersonators to a tape of Presley singing, "Viva Las Vegas."

Boing cognoscenti are clamoring for Hamed to fight either Erik Morales or Marco Antonio Barrera, two super bantamweights. Hamed has a mandatory title defense scheduled for November against Koko Kovacs, and plans to fight Barrera early next year.

The undercard was highlighted by Antonio Diaz's junior welterweight victory over "Irish" Micky Ward (35-10, 26 KOs) of Lowell, Mass. Despite a flurry of blows by Ward in the ninth round, Diaz, (33-2, 22 KOs) of Coachella, Calif., won a unanimous decision.