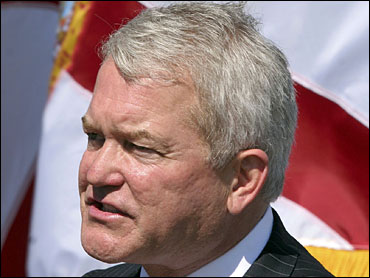 A Roman Catholic priest said he had an inappropriate two-year relationship with former Rep. Mark Foley in the 1960s that included massaging the boy in the nude, but he did not specifically remember having sex, a newspaper reported Thursday.

The Rev. Anthony Mercieca, 72, described several encounters that he said Foley might perceive as sexually inappropriate, the Sarasota Herald-Tribune reported. They include massaging Foley while the boy was naked, skinny-dipping together at a secluded lake in Lake Worth and being nude in the same room on overnight trips.

"Once maybe I touched him or so ... but I didn't — it's not something you call rape or penetration or anything like that," Mercieca told West Palm Beach station WPTV in a phone interview.

"He seemed to like it, you know? So it was sort of more like a spontaneous thing," Mercieca said.

In a phone interview Thursday with CBS News Anchor Katie Couric, Mercieca confirmed many of the details of the story, including that he had spent time with Foley over a two-year period. Watch Couric's report at 6:30 p.m. ET on the CBS Evening News..

Mercieca said there was one night when he was in a drug-induced stupor and there was an incident but he couldn't clearly remember, the newspaper reported.

"I have to confess, I was going through a nervous breakdown," the newspaper reported Mercieca as saying from his home on the island of Gozo, south of Sicily. "I was taking pills — tranquilizers. I used to take them all the time. They affected my mind a little bit."

In an interview with The Associated Press, Mercieca acknowledged that he used to go naked in saunas with Foley, but denied that the two had sex. But he said the report in the Sarasota Herald-Tribune about their relationship was "exaggerated."

"Let's say it was 40 years ago, almost 40 years ago, so why bring this up at this late stage?" Mercieca asked during the WPTV interview. "Anyway, he will overcome it, with a psychiatrist you know. Mark is a very intelligent man."

Mercieca told the AP that he and Foley would go into saunas naked when he was a priest in Florida and Foley was a parishioner, but he said "everybody does that."

His lawyer said shortly after his resignation that Foley was an alcoholic, gay and had been molested as a boy by a "clergyman." Foley's civil lawyer, Gerald Richman, said the alleged abuser was a Catholic priest whose name he shared with state prosecutors on Wednesday.

Earlier this month, Roth said "Mark does not blame the trauma he sustained as a young adolescent for his totally inappropriate" e-mails and instant messages. "He continues to offer no excuse whatsoever for his conduct."

Mercieca had worked at Sacred Heart Catholic Church in Lake Worth in 1967, according to church records. Foley would have been 13 at the time.

Mercieca, 72, said he and Foley became fast friends when he moved there from Brazil and "loved each other like brothers," the newspaper reported.

Mercieca said he taught Foley "some wrong things" related to sex, though he wouldn't specify what he meant, the newspaper said. It reported the priest said that at the time, he considered the relationship innocent, but he now says he could see how his actions could be called inappropriate.

Mercieca said although Foley plans to "expose him to the world," he still has "great memories of our trips," the newspaper reported.

"I wish him well," Mercieca said. "Let bygones be bygones."

Mercieca was adamant that his encounter with Foley was an aberration, and that the Catholic Church never had to send him for counseling during his 38 years in the priesthood in Florida, according to the newspaper.

"I have been in many parishes, and I have never been" accused, he said.

A Web site for the Diocese of Gozo lists Mercieca as one of its priests. Joseph Calleja, a priest with the diocese, said Mercieca is still an active priest but that he lives at his own home. Gozo is an island in Malta.