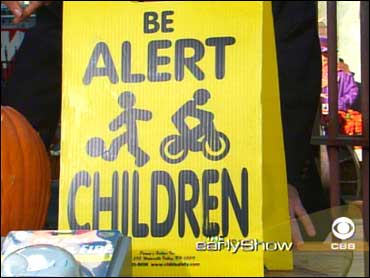 Children are gearing up for trick-or-treating and Halloween fun, but there are some things parents should consider to keep children safe.

A common misconception is that the biggest danger is the candy. That's not true says Alan Korn, the director of public policy for Safe Kids Worldwide.

He tells The Early Show it has been decades since there has been an incident like that. And though parents should not throw caution to the wind, the biggest concern is vehicles.

Korn says that during Halloween a pedestrian death is four times more likely than any other time. This year, in particular, because of the time change.

However, since there is predictable behavior by both parties, there are things motorists can do to avoid an accident.

The street
"By all means slow down, especially in the neighborhoods," Korn says. "Come to complete stops at the stop signs."

As for the kids, he says they should trick-or-treat by going to all of the houses on one side of the street, then cross at the top, and then go down the other side. "On a long block, if the kids are going back and forth the whole time, it seems you cross the street a lot of times and that's no good," he says.

The costume
The second safety issue is the costumes, especially dark costumes and masks with small holes. Korn says face paint is a much better alternative than a mask.

"It's also better if your child is in a light colored costume," he says. "If they aren't, you should put some retro-reflective tape on them so that they can be seen by cars in the dark; also, the less flowing, the better. You don't want their costume to be extra billowy or dragging behind them so they can trip. And if you are making your own costume, try to use less hazardous materials. For example, I wouldn't wrap up the kid in newspaper or crepe-paper. You want to try to use safer materials."

The home
When it comes to the safety of children, Korn notes adults need to consider the Halloween decorations around their homes. For example, lots of people decorate their houses with jack-o-lanterns and candles.

"Clear your lawn of items that kids can trip over. You don't want candles too close to the front steps where kids may be running and could trip," he says. "Also, clear away wet leaves and turn your outside lights on so it's well-lit for the trick-or-treaters."

Another thing he advises is to change the batteries in your smoke alarm. "Lots of people are having parties with candles and jack-o-lanterns," he says.

The candy
Another concern is the safety of Halloween candy, Korn says.

"This is what I do with my kids' candy: inspect it for opened wrappers," he says. "There is no reason to take homemade items unless you really know the neighbor. And, in the end, if you have to throw out five to 10 pieces that come unwrapped; then by all means do it. There is no shortage of tooth decay on Halloween."

"What parents should do is to encourage kids to go out in a neighborhood event," he says. "Have the kids go out in packs because they're easier to see by cars if they're in groups. And make sure you have a nice ratio of adults that carry flashlights. Kids under the age of 10 need the supervision.

"The No.1 killer of kids is unintentional injury, and a lot of it is caused by kids being unrestrained in cars, not in car seats and not buckled up. So, if you're taking the kids trick-or-treating or to a party or anywhere, be sure to strap them in properly."