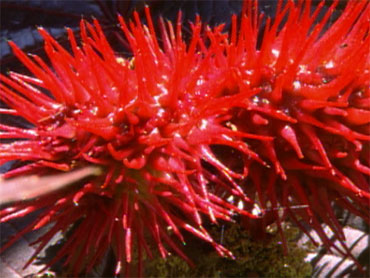 We're well into summer now, an excuse to spend time in the great outdoors. Just be careful of some of that pleasant mountain greenery just waiting to be plucked by the careless or unaware. Martha Teichner reports our Cover Story:

In Eureka, California, Amy Stewart takes us on a tour of her home. But after visiting what she calls her "good garden," she then leads the way along a path to evil . . .

"This is the poison garden, just on the other side of this gate," she said, leading the way into a horticultural Death Row.

You heard right: poison. Just about every plant growing here could kill you.

"I find out that if there was a plant that was used to commit a crime or started a war, I sort of love that, you know, a plant with a dark history."

Take foxglove: Ingesting it is like putting your heart on steroids. And oleander? "Very deadly," Stewart said. "Oleander contains cardiac glycocides that will actually stop the heart."

Angelina Rodriguez of Montebello, Calif., tried to kill her husband by serving him oleander soup. It only put him in the hospital. She finished the job with antifreeze-spiked Gatorade. Rodriguez wanted his insurance - she got the death penalty.

And that pretty monk's hood?

"Ultimately it can bring on death by asphyxiation," said Stewart.

She also showed Teicher a pretty tall white flower that resembles Queen Anne's lace. "This is hemlock, it's poison hemlock. It's the plant that killed Socrates."

Stewart is the author of "Wicked Plants," an entertaining but scary little volume of horticultural horror stories. It includes, yes, the weed that killed Lincoln's mother (white snakeroot).

"It's a poisonous plant, toxic also to cows, and so the cows would graze on the plant, the cow would get sick, the poison would end up in the milk, people would drink the milk and get sick and die," Stewart explained. "This was called milk sickness, and so Abraham Lincoln's mother died of milk sickness when Abe was only about nine years old.

"And then there's Frederick Law Olmstead, the famous landscape architect. At the age of 14, he was nearly blinded by exposure to poison sumac. He missed a year of school, but it didn't stop him from going on to design New York's Central Park." 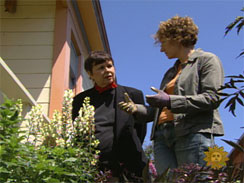 "This is all terrifying," Teichner remarked.

"It is kind of terrifying, isn't it?" Stewart said. "But, you know what, these kinds of poisons are all around us."

Dr. Cathleen Clancy, associate medical director at the National Capital Poison Center in Washington, D.C., said that across the United States last year, there were 63,000 cases of exposure to poisonous plants.

Those were cases reported to the national 1-800 poison help number, such as an exposure to the habanero pepper.

Don't laugh . . . eating a habanero pepper could actually put somebody in the hospital.

Peppers, including habaneros, are members of the nightshade family, which Amy Stewart says includes some of the best - and worst - plants in existence.

Datura (commonly called thornapple) is also in the nightshade family: "A very dangerous plant that can interfere with respiration and heart rate and can ultimately send someone into a coma," said Stewart.

But look what else is in the nightshade family: tomatoes . . . eggplants . . . and potatoes.

Figuring out what's poisonous and what isn't can be tricky.

Christopher McCandless, the subject of the bestseller and later the film "Into the Wild," went to Alaska and lived off the land, eating what he found growing around him. It's widely believed (but hasn't been proven conclusively) that he died because he confused a poisonous plant for an edible one.

Stewart pulled out vials from an old doctor's kit. "I realized that these are some of my wicked plants." She takes the kit to with her to book signings.

"You will not be surprised to see that I also carry around with me the world's worst plant . . . tobacco!"

OK, she put the cigarette there, but it was to make people recognize tobacco as a poison plant.

Ricin is a toxic by-product of castor beans. On September 7, 1978, Georgi Markov, a Bulgarian working for the BBC in London, was waiting for a bus when somebody (the KGB was suspected) jabbed him in the back of the leg with an umbrella. Four days later Markov was dead - killed by ricin.

How much ricin? A little speck.

But now consider this . . . castor oil, the old-fashioned laxative, also comes from castor beans, and is harmless.

"The poison is in the dose, said Kip Panter, who heads the U.S. Department of Agriculture's Poisonous Plant Research Laboratory in Logan, Utah. "Most things are toxic if they're eaten in large enough quantities or too much."

For over a century, the USDA has been sending teams to the remotest parts of the West to investigate plant poisonings, which cost ranchers $340 million a year in livestock losses.

Today, the USDA runs what Panter brags is like a CSI lab devoted to plant pathology.

So toxic that Panter says, "Don't plant yew trees it if you've got children or pets."

But here's the flip side: Japanese yew contains a compound called taxol, which has been used for cancer chemotherapy for a number of years.

Lupine is very good feed for animals with good nutrients. The only trouble is, if they happen to be pregnant, their babies will be born with serious deformities, a condition called crooked calf syndrome in cattle. In goats, it causes cleft palate.

"Goats turned out to be a real good model because they're small enough that we can do ultrasound on the mothers," said Panter.

Which led to an amazing and promising discovery: all because of a plant that can be poisonous, researchers from the Utah lab and plastic surgeons from the Lahey Clinic in Boston found they could fix cleft palate by operating on the fetus inside the womb. The fetus thus has the ability to repair without scar tissue formation.

So the baby goat is born completely normal, indistinguishable from any other, and that's pretty remarkable when you think about the potential . . . if that procedure were able to be done in humans.

At Brooklyn Botanical Garden...)..P.7/ scot//we thought wicked plants, a garden to die for, would be a good hook..(walk-n-talk long shot)

At the Brooklyn Botanic Garden, between now and the end of the summer, the public can get a new appreciation of the power of nature, both good and evil. You can wander at will among the villainous Venus fly traps that digest unlucky insects. 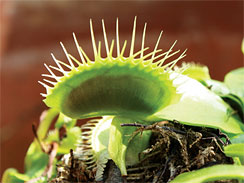 (CBS)
(Left: The Venus fly trap. If you were small enough, this plant would eat you.)

The victim "sticks to it and then it closes, and gradually these enzymes begin to dissolve it . . . pretty gruesome," said Scot Medbury, president of the Brooklyn Botanic Garden.

Or you can toddle on by the treacherous taro.

"You may have heard of that from Hawaii, where they make poi," said Medbury. "But this has oxalate crystals in it, so if you don't boil or leech or otherwise soak out those things, it really can affect your vocal cords."

They may swell up so you won't be able to swallow...

"A little knowledge goes a long way," he said.

"Do people come here, take a look at all the poisonous plants, and it scares the living daylights out of them?" Teichner asked.

"I don't think so, I think they're intrigued," Medbury said.

The takeaway here: Be intrigued, but beware.