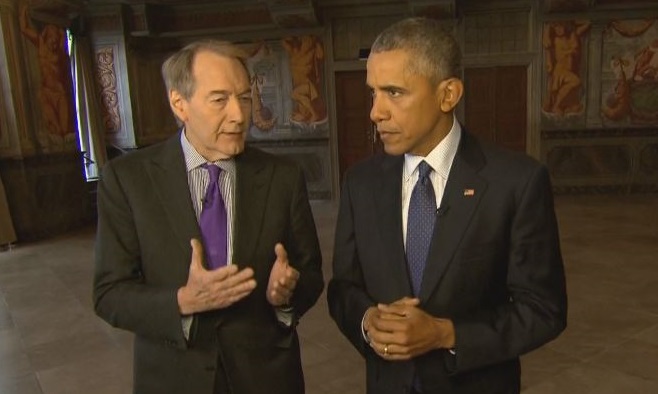 President Obama is back at the White House after a week in the Middle East and Europe. During his trip, "CBS This Morning" co-host Charlie Rose spoke with the president in Germany for a wide-ranging interview. Mr. Obama had just announced 250 additional American troops will go to Syria to help in the fight against ISIS.

But the president also faces other big challenges in Asia, including North Korea's claims of successful ballistic missile tests and China's military installations on man-made islands in disputed waters of the South China Sea.

"How aggressive do you see the action in the South China Sea? And do you worry that they will cross some line, in which you'll have to respond more aggressively?" Rose asked the president.

"I've been consistent, since I've been president, in believing that a productive, candid relationship between the United States and China is vital, not just to our two countries, but to world peace and security," Mr. Obama said.

It's not a zero-sum game, Mr. Obama added.

"What is true, though, is that they have a tendency to view some of the immediate regional issues or disputes as a zero-sum game," he said. "So with respect to the South China Sea, rather than operate under international norms and rules, their attitude is, 'We're the biggest kids around here. And we're gonna push aside the Philippines or the Vietnamese.' ... But it doesn't mean that we're trying to act against China. We just want them to be partners with us. And where they break out of international rules and norms, we're going to hold them to account."

In regards to North Korea, Mr. Obama described the regime as "a massive challenge."

"Our first priority is to protect the American people and our allies, the Republic of Korea, Japan, that are vulnerable to the provocative actions that North Korea is engaging in," Mr. Obama said.

He said North Korea is "erratic enough" and the country's leader, Kim Jong Un, is "irresponsible enough that we don't want them getting close."

"But it's not something that lends itself to an easy solution," Mr. Obama said. "We could, obviously, destroy North Korea with our arsenals. But aside from the humanitarian costs of that, they are right next door to our vital ally, Republic of Korea."

Mr. Obama explained how the U.S. has been preparing to fend off threats from North Korea.

"One of the things that we have been doing is spending a lot more time positioning our missile defense systems, so that even as we try to resolve the underlying problem of nuclear development inside of North Korea, we're also setting up a shield that can at least block the relatively low-level threats that they're posing right now," Mr. Obama said.