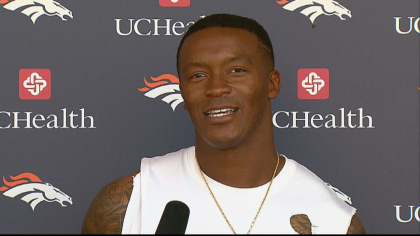 Obama announced the move on Wednesday. Minnie Pearl Thomas of Allentown, Georgia, is now set to have her prison sentence commuted on Dec. 1. She was serving time for conspiracy to possess with intent to distribute cocaine.

Thomas talked about the news right after he learned about it.

"I just found out right when I came in from weights. I had no idea. I was surprised. I was excited, too. I heard 200+ people. For my grandmother to be one of them, it's a blessing. I'm super excited. I called my mom, and my grandmother called them and said she got commuted," Thomas said.

Last year, Thomas's mother Katina Smith had her sentence on drug trafficking charges commuted by Obama. She is now free.

Minnie Pearl Thomas and Katina were both arrested in 1999 in Montrose, Georgia. Demaryius was eleven at the time. His father was in the Army in Kuwait, so he went to live with his aunt and uncle.

"I'm happy, I'm excited. The past two years, I got my mother and my grandmother out. A lot of other people got their family members out that didn't do crazy crimes, so it's a blessing," Thomas said.

Minnie had two previous drug convictions when she was arrested in 1999. She then received two life sentences with the possibility for parole after 40 years.

Minne and Katina were living in the same cell in prison and Thomas talked about the difficulty after Katina was released last year.

"Once she gets out she'll be good," Thomas said. "I won't have to wonder how she's doing. She got kind of emotional when my mom left because you know, she was in the same cell and everything. So when my mom left, she was kind of sad and missing my granny and she was just ready to get out. It was all she would talk about every time we had a conversation. She used to cry and she would make me emotional, so I'm happy now."