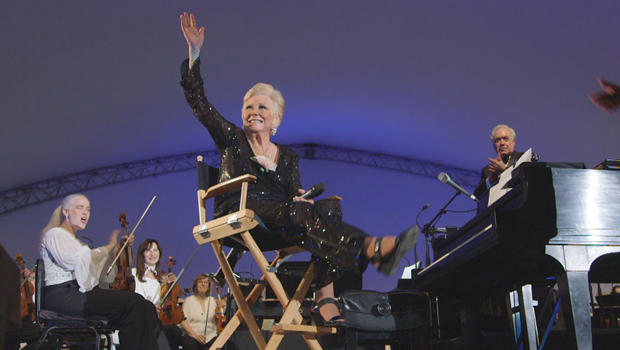 This past summer, six thousand people came out to the Los Angeles County Arboretum to see legendary entertainer Mitzi Gaynor, as the 88-year-old performed with singer and pianist Michael Feinstein, and played with the audience.

She's been playing with audiences for over 70 years now, first in movies (like "There's No Business Like Show Business" and "Les Girls"), then on TV.

Mitzi was born to perform. Her mother was a dancer. Her father, a cellist, was proud of his Hungarian heritage, hence Mitzi's birth name: Francesca Marlene de Czanyi von Gerber.

She started taking dancing classes when she was eight years old: "Detroit, the Silver Studios, Madame Kathryn Etienne. When I was 11, she said, 'Mitzi's gonna go to Hollywood and become a star.'"

And so, she headed west, and at 17, Mitzi Gerber was signed to a seven-year deal at 20th Century Fox. She recalled that a producer there thought her name sounded like a delicatessen, "so he said, 'How about Gaynor, [like] Janet Gaynor?' My father loved it."

Mitzi earned her stripes singing and dancing through a parade of forgettable movie musicals, but she struck gold when she began dating eccentric billionaire businessman Howard Hughes.

Gaynor was just 18 at the time; Hughes was in his mid-forties.

Rocca asked, "What was your connection, do you think? Was it emotional? Was it – "

"I think he wanted to get into my pants," Gaynor replied.

Today, Gaynor has more than just memories, sporting the earrings and necklace that Hughes gave her. "So you're wearing the whole Howard Hughes collection right now!" Rocca said.

She calculates they were together for eight months. Did she love him? "I thought I did. He asked me to marry him. Then I found out he'd asked 47 other women at the same time."

But then Gaynor did meet the love of her life, Hollywood producer and agent Jack Bean. Their 52-year marriage began this way: "The doorbell rang at the Chateau Mormont. And I open up the door, and there's this man standing there. He has the bluest eyes I've ever seen in my life, he's about 5'11". God, I loved him."

Gaynor broke it off with Howard Hughes, and left with quite the parting gift. "He said, 'Okay, I want you to buy some dirt.' I said, 'Some dirt?' He said, 'Yes, in Las Vegas.' $25 an acre, which I sold maybe eight years ago for two million bucks."

Watch an extended cut of Mitzi Gaynor performing "I'm Gonna Wash That Man Right Out of My Hair," from "South Pacific":

Rodgers and Hammerstein's "South Pacific" made Mitzi Gaynor an international star. But she was not the first choice to play Nellie Forbush – in fact, she said, "a lotta people had announced themselves: Elizabeth Taylor, Susan Hayward, Doris Day."

"Yeah, much bigger than I."

"Did you think you even had a shot?"

"Well, I tell ya sumpin': I could sing and I could dance. Liz Taylor couldn't sing, and she couldn't dance."

Gaynor's screen test proved she was a natural singing about midwestern crops and tasty desserts:

"I'm as corny as Kansas in August,
I'm as normal as blueberry pie…"

The beloved Mary Martin had played the role on Broadway, and won the Tony for it. Many had expected her to play Nellie Forbush on the big screen.

Gaynor co-starred with the Italian actor Rossano Brazzi, who still spices up her scrapbook. "Mama Mia! So little fabric covering up so much Italian. Wow!"

Gaynor became so famous, Ed Sullivan lobbied to have her on his variety show. She was the headliner on his show on February 16, 1964, performing "Too Darn Hot." And who else appeared that night? "The Beatles," she said.

It was the Fab Four's second Sullivan appearance, in a show originating from a hotel in Miami.

Rocca asked, "What were they like to you, The Beatles?"

Rocca asked, "Did that give you a boost at the time?"

"Well, except that I perspired, and I had a strapless dress on, So the Catholic Church said I was 'lascivious.'"

By that point, Gaynor had made her 17th and last film.

"And you can recognize that in yourself?"

"Do you think you're being hard on yourself?"

So, the ever-tenacious Mitzi Gaynor turned to Vegas, where she had enormous success, which led to a string of over-the-top, hit TV specials in the late '60s and '70s. This was Mitzi at her best: she sings, she dances, and she's always in on the joke. "I won't do a number unless I can have a good time doing it," she said.

Fifty years later, Gaynor is still winking at audiences. But when she sang with Feinstein this summer, she performed her entire set sitting down. It's unclear if she will ever dance again.

Rocca said, "You don't move around the way you used to, but you still wanna perform."

"Yeah, but I do move around the way I used to, in my mind, because my leg is better. I hurt my leg bad. It's been quite some time since I've been able to really jig, but I want to go jigging again."

"So you do think you'll continue dancing?"

"Oh, yes, I must. I'm vain. Can't tell that, can you?" she said. "I wanna look good, and I wanna do good because I think a lot of people are waiting for me to come back. Oh, that's a good line. Write that down. Write that down, somebody!"

* Correction: In recounting how she got the role of Nellie Forbush in "South Pacific" in place of Mary Martin, the role's originator on Broadway, Mitzi Gaynor noted that Martin's age at the time of the film's production was 14 years older than costar Rossano Brazzi. At the time she was screen-tested for the role, in late 1956, Gaynor (born in September 1931) was 25; Brazzi (born September 1916) was 40, and Martin (born December 1913) would have turned 43.