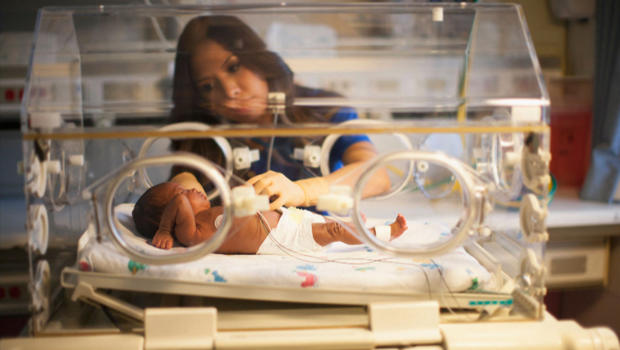 Premature births pose a challenge not just for families, but for our whole country. Sarah DiGregorio is the wife of "Sunday Morning" producer Amol Mhatre, and preventing premature births is the subject of her new book, "Early: An Intimate History of Premature Birth and What It Teaches Us About Being Human":

Chances are you know someone who was born prematurely. Last year, one in ten American babies was born too soon, before 37 weeks gestation. Reportedly Albert Einstein, Charles Darwin and Stevie Wonder were all preemies. That puts me and my family in very good company.

We've come a long way since my grandfather was born weighing about one-and-a-half pounds. My great-grandmother kept him alive by putting him in a very low temperature oven. I was born about two months early in 1979. And in 2014, my daughter, Mira, was born at 28 weeks weighing 1 pound 13 ounces. She spent two months in the neonatal intensive care unit. Five years later, she's the spunkiest kindergartner in New York City.

So, while you might know someone born prematurely, you might not know how devastating premature birth is, for families, for communities, and for our country as a whole.  Being born prematurely comes with a host of risks, ranging from death to lung disease, to neurological and learning disabilities.

The United States has one of the highest rates of premature birth in the industrialized world, at over 10 percent. That's for a lot of reasons, including big problems that are bad for Americans' health, like racism and income inequality.

Babies who are born early often need intensive care and life support at birth, and ongoing therapies as they grow, and that is not cheap. In fact, prematurity costs the United States at least $26 billion a year.

When my daughter, Mira, was born, her ears were still fused to the side of her head. She had ⅓ cup of blood in her entire body. Her brain was not fully developed. She was still in the process of becoming herself, in a very literal sense.

We are so lucky that Mira is now a healthy, happy five-year-old. Knowing how far she's come, I hope you'll forgive me for saying I think my daughter is amazing. And all premature babies should be celebrated, no matter what their outcome has been.

But just marveling at them isn't enough.

We owe them more: For premature babies, just being born can leave them with a preexisting condition. Not all families can access or afford the care their children need. And not all pregnant people can access the quality, unbiased care that would help prevent premature births in the first place.

As Americans, we can do better than this. The smallest among us – and all of us – deserve it.

​How Australia dealt with mass shootings
Thanks for reading CBS NEWS.
Create your free account or log in
for more features.
View CBS News In
CBS News App Open
Chrome Safari Continue
Be the first to know
Get browser notifications for breaking news, live events, and exclusive reporting.