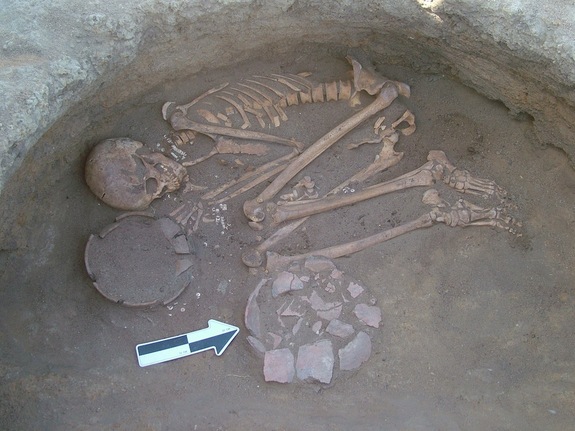 When looking for a meal, prehistoric people in Africa munched on the tuberous roots of weeds such as the purple nutsedge, according to a new study of hardened plaque on samples of ancient teeth.

Researchers examined the dental buildup of 14 people buried at Al Khiday, an archeological site near the Nile River in central Sudan. The skeletons date back to between about 6,700 B.C., when prehistoric people relied on hunting and gathering, to agricultural times, at about the beginning of the first millennium B.C.

The researchers collected samples of the individuals' dental calculus, the hardened grime that forms when plaque accumulates and mineralizes on teeth. Such buildup is fairly common in prehistoric skeletons, the researchers said. [The 7 Most Mysterious Archaeological Finds on Earth]

"The oral hygiene activities were not as good as they are today," lead researcher Karen Hardy, a professor of prehistoric archeology at the Institució Catalana de Recerca i Estudis Avançats and Universitat Autònoma de Barcelona in Spain, told Live Science.

An analysis of the chemical compounds and microfossils in the dental calculus point to the purple nutsedge (Cyperus rotundus), Hardy said. In the teeth of each of the skeletons, Harder and her colleagues found starch granules that share a chemical composition with nutsedge. A close look at the granules also revealed how these people likely prepared their food: Those from the earlier time period likely ate the plant raw or lightly heated, which would have helped make the roots easier to peel.

In contrast, granules from the Neolithic period, beginning in about 4,500 B.C. in central Sudan, are cracked and enlarged, suggesting that people may have ground or roasted these granules over a fire.

It's difficult, however, to determine how prehistoric people prepared their meals based on the present appearance of starch granules, said John Dudgeon, an associate professor of anthropology at Idaho State University in Pocatello, who was not involved in the study. Further research may help scientists determine whether the food was roasted or boiled, or if it simply degraded on its own.

"Starches are particularly sensitive," Dudgeonsaid. They fall apart as soon a person begins chewing on them. "The fact that they even survive in the dental calculus in the teeth is amazing."

However, he commended the researchers for their detailed work in matching the chemical analysis of the purple nutsedge to the fragments found in the dental calculus. "It provides a novel way to look at the micro-residues on the skeleton," Dudgeon said. "This a pretty good way to fingerprint what that material is that is coming out of the calculus."

It's unclear why prehistoric people chewed on the tubers, but other ancient societies have benefited from the plant's many uses. Hunter-gatherer societies, such as the Aboriginals in central Australia, relied on these tubers for carbohydrates, and studies show that the plant contains lysine, an essential amino acid that the human body cannot produce on its own.

In high concentrations, purple nutsedge also inhibits atype of bacteria that leads to tooth decay.This may explain why researchers have found fewer cavities in the Al Khiday individuals at the turn of the first millennium B.C., compared to their counterparts at Gabati, an archeological site to the north, Hardy said. Still, more research is needed to examine indicators of dental hygiene in these areas.

Though purple nutsedge and its related sedge species are rich in carbohydrates, modern-day farmers consider these plants a nuisance. The slender-stemmed, flowering nutsedge has deep, tuberous roots that are hard to pull out of soil.

"It's a veggie, weedy thing," Hardy says. "It's very prolific. That's why it's such a problem for farmers today."

Purple nutsedge typically grows in tropical areas. In the 1980s, researchers found that the plant's tubers taste bitter when grown in wet areas, but reported that the taste improved when the weed was planted in drier places. Though the plant is no longer a common carbohydrate snack, people still use it today for herbal medicine in the Middle East, Far East and India, Hardy said.

The results were published July 16 in the journal PLOS ONE.