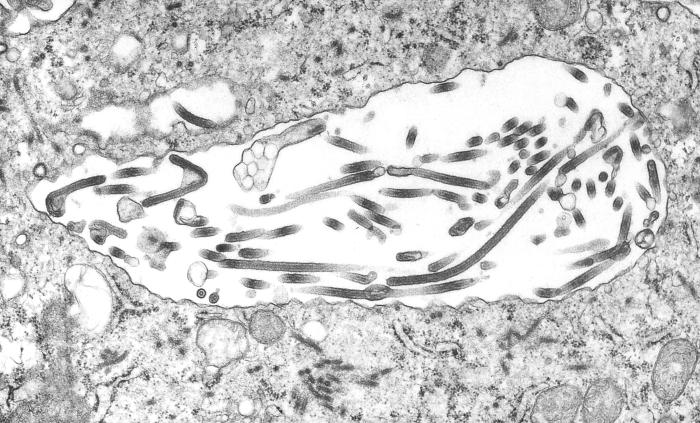 The CBC reported Tuesday the man tested negative for Ebola and hemorrhagic fever, and may have malaria.

SASKATOON, Saskatchewan -- A possible Ebola case is being investigated in Canada in a man who recently traveled to West Africa where an outbreak is taking place.

The man is seriously ill and being kept in isolation in a Canadian hospital with symptoms of a hemorrhagic fever resembling Ebola, Saskatchewan health officials said.

Results are expected Tuesday, but Werker said they may be inconclusive.

"All we know at this point is that we have a person who is critically ill who traveled from a country where these diseases occur," Werker said. "There is no risk to the general public at all about this."

The disease has no specific treatment or vaccine. Those at highest risk for the hemorrhagic fever are health care workers and family and friends of infected individuals.

Hemorrhagic fevers like Ebola can be transmitted through direct contact with the blood or secretions of an infected person, or objects that have been contaminated with infected secretions.

In West Africa, health workers are trying to contain an outbreak of the deadly Ebola virus which is believed to have infected 80 people killing 59 in a remote forest region in the south of Guinea.

Doctors Without Borders, said Wednesday it is trying to contain the outbreak by setting up two such quarantine sites in southern Guinea.

The first outbreak of the Ebola virus since 1994 in this part of West Africa has raised alarm in neighboring countries as well.

Across the border in Liberia, health officials are investigating five deaths after a group of people crossed the border from Guinea in search of medical treatment.

Werker said health workers caring for the man at a hospital in the city of Saskatoon were taking precautions by wearing masks, gowns, gloves and boots. She said hemorrhagic fevers are not easily spread.

Werker said the man showed no signs of illness while he was traveling. The incubation period for hemorrhagic fever is up to 21 days, she said.

Previous Ebola outbreaks have been reported in Congo and Uganda, most recently in 2012 when 24 people were infected, including 17 deaths.

Outside of three laboratory-confirmed cases in England and Russia, all human illness and death has occurred in Africa, according to the U.S. Centers for Disease Control and Prevention.