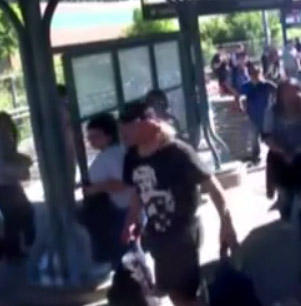 PORTLAND, Ore. -- Police have arrested a man accused of stealing a backpack and wedding ring from a victim of last week's triple stabbing on a light-rail train in Portland.

Portland police Sgt. Pete Simpson says the ring and backpack belonged to Ricky Best, a 53-year-old man who was killed while heading home from his job as a city employee. Simpson says the backpack contained personal items important to Best's family.

Simpson says the suspect was seen on surveillance video leaving the train carrying the backpack in his right hand. The Portland Police Bureau tweeted news of the arrest Friday, but did not immediately release the man's name.

There were personal items important to Best's family in the backpack, including contact information for people Best served with in the Army. His family wants that information so they can get in touch with them.

"They've suffered an immense loss and this is just one more layer of tragedy to their already awful experience," Simpson told KOIN-TV, adding that it was "really an unconscionable act" and an "awful scenario for this family."

Police say Jeremy Christian stabbed three men - two fatally - after going into a racist tirade on the train. He has yet to enter a plea on charges of aggravated murder and other crimes.