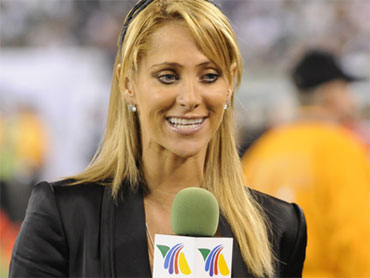 Washington Redskins running back Clinton Portis apologized after saying it's almost certain that a female reporter "is going to want somebody" when she goes into an NFL locker room.

Addressing the NFL's investigation of the New York Jets' treatment of reporter Ines Sainz, Portis said Tuesday that both sides have wandering eyes when the sexes are mixed in such a setting.

"I think you put women reporters in the locker room in position to see guys walking around naked, and you sit in the locker room with 53 guys, and all of the sudden you see a nice woman in the locker room, I think men are going to tend to turn and look and want to say something to that woman," Portis said in his weekly appearance on 106.7 The Fan.

In a statement later, Portis said he "was wrong to make the comments" and that he respects the job reporters do. The Redskins said they "will take the necessary steps" to remind players about acting in a professional manner.

The NFL swiftly condemned Portis' comments as inappropriate and offensive.

The Jets are under scrutiny after a few players apparently made catcalls at Sainz on Saturday while she was waiting to interview quarterback Mark Sanchez. Also, an assistant coach seemed to deliberately throw the ball to players who were near Sainz during a practice drill.

Earlier, Portis said he wasn't aware of the Sainz situation, but offered his opinion on what he considered to be a female reporter's perspective.

"You put a woman and you give her a choice of 53 athletes, somebody got to be appealing to her," Portis said. "You know, somebody got to spark her interest, or she's going to want somebody. I don't know what kind of woman won't, if you get to go and look at 53 men's (bodies). ... I know you're doing a job, but at the same time, the same way I'm going to cut my eye if I see somebody worth talking to, I'm sure they do the same thing."

Portis is known for his outspoken viewpoints, having riled teammates and coaches over the years when speaking his mind. He uncharacteristically stayed out of the spotlight through this year's training camp and preseason, and earlier in his radio appearance he talked about how much he was enjoying his new "low profile."

On "The Early Show", Sainz put the incident in her own words.

She said the minute she walked into the locker room, everyone started talking about her and made jokes.

IN heavily-accented English, she said, "I decided not to pay attention. I was focusing on my interview, so I go direct to the locker of room of Mr. Sanchez and I wait for him. But I believe that the rest of the media start to hear the different kind of things that I didn't hear. And sometime in a minute, a colleague (said), 'Come with me, and I'm so sorry. ... It's terrible. I feel sorry for you.' So I tried to say, 'Don't worry, I can handle the situation.' And that's it. And I don't even try to pay attention."

She added, "I was focused on my job, and try to not pretend not to be feeling bad in this situation."

"Early Show" co-anchor Erica Hill said, "A locker room is a tough place for anybody, male or female, and a lot of journalists say, 'Look, you don't want to be in there no matter what, whether you're male or female.'"

She asked Sainz, "You covered sports, though, in the past. Have you ever had a reaction like that before?"

Sainz, a veteran reporter for the Mexican network TV Azteca, said, "Well, actually, yes, I was covering for nine years. And probably, I have similar reactions in a different kind of sports. But, never, the vocabulary never so rude. ... I think that the media that in the locker room, what are really upset is about the vocabulary they used to refer to me. I want to say that I'm not the one who made the charge. Because I didn't even say, 'Hey, I feel bad for that, with NFL.' The ones that say that something is happened there is the rest of the media."