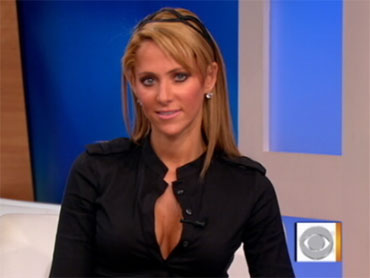 The New York Jets played their first game in their new stadium last night, but their inaugural contest was shrouded in scandal.

It wasn't a good start to the football season for the Jets, as they lost to the Baltimore Ravens 10-9. But CBS News correspondent Betty Nguyen reported on "The Early Show" that could be the least of their worries.

The National Football League (NFL) is investigating the team for potentially sexually harassing behavior toward a female reporter from Mexico.

Ines Sainz, a former Miss Spain and Miss Universe contestant, was on the sidelines during practice last Saturday when Jet players and coaches appeared to throw footballs in her direction.

Later, as she waited in the locker room to conduct an interview with quarterback Mark Sanchez, she was, she says, reportedly the target of catcalls and rude comments. She tweeted in Spanish: "I'm so uncomfortable! I'm in the Jets locker room waiting for Mark Sanchez and trying not to look around me."

And a few moments later, she wrote, "I want to cover my ears."

Women reporting on the sidelines and locker rooms is nothing new, but this incident is making for embarrassing headlines for both the Jets and NFL.

CBS Sports' Lesley Visser, a member of the Football Hall of Fame, and a pioneering female sports journalist, says there's no room for a "boys will be boys" attitude.

Visser said, "It is both personally and professionally discouraging. ... It's just not relevant here. These are professional athletes, professional reporters, and we're not in the seventh grade anymore."

Sainz says Jets owner Woody Johnson, has apologized and she has accepted, but that doesn't mean the team is out of legal trouble.

Wendy Murphy, a victims' rights advocate and former prosecuting attorney, said, "If people around her saw it as sexual harassment, it could be actionable even if she's not quite clear if she wants to file a lawsuit yet."

And the Jets could also face disciplinary action from the NFL, Nguyen reported. An investigation is underway. Officials will be interviewing both players and coaches today.

On "The Early Show" Sainz put the incident in her own words.

She said the minute she walked into the locker room, everyone started talking about her and made jokes.

IN heavily-accented English, she said, "I decided not to pay attention. I was focusing on my interview, so I go direct to the locker of room of Mr. Sanchez and I wait for him. But I believe that the rest of the media start to hear the different kind of things that I didn't hear. And sometime in a minute, a colleague (said), 'Come with me, and I'm so sorry. ... It's terrible. I feel sorry for you.' So I tried to say, 'Don't worry, I can handle the situation.' And that's it. And I don't even try to pay attention."

She added, "I was focused on my job, and try to not pretend not to be feeling bad in this situation."

"Early Show" co-anchor Erica Hill said, "A locker room is a tough place for anybody, male or female, and a lot of journalists say, 'Look, you don't want to be in there no matter what, whether you're male or female.'"

She asked Sainz, "You covered sports, though, in the past. Have you ever had a reaction like that before?"

Sainz, a veteran reporter for the Mexican network TV Azteca, said, "Well, actually, yes, I was covering for nine years. And probably, I have similar reactions in a different kind of sports. But, never, the vocabulary never so rude. ... I think that the media that in the locker room, what are really upset is about the vocabulary they used to refer to me. I want to say that I'm not the one who made the charge. Because I didn't even say, 'Hey, I feel bad for that, with NFL.' The ones that say that something is happened there is the rest of the media."

Hill also pointed out criticism on the sports blog Deadspin that said the behavior toward Sainz was disrespectful toward the team and football as a whole.

Sainz replied, "I am really grateful with her and with (The Association for Women in Sports Media), because they take it very seriously. And I believe that that is OK. Because, you are woman, and you are a professional way. I make everything in as a professional way that I needed to do. And not any woman deserves to be treated like this. You must deserve to treat like a professional."

Sainz said she hasn't received any comments about her outfit she was wearing that day. She wore a white, form-fitting collared shirt and jeans.

She said, "I think that each woman wants to be attractive, and I have nine years (in) my job. I have more than 250 interviews with the best players in the world for football, the most important sports. So it's my style. I never have any trouble like this. So I think that, don't you think that like a woman, that if you dress and feel good and go and be professional all the time, you deserve to be treated like this?"

Sainz said she doesn't plan to pursue any further action.

She said, "I really believe in what NFL decide(s). Because, they called on Sunday and I made a full declaration of the act -- like a witness. And they take very seriously, and I really believe that they find that they need to punish someone, they are going to do it. And if they find if it's not necessary, I really trust in what they say."