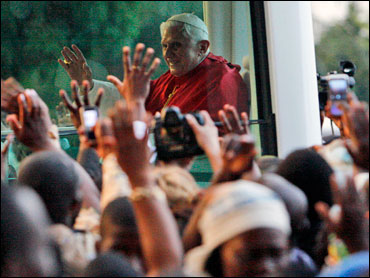 Pope Benedict XVI told Muslim leaders on Thursday that true religion rejects violence, and he held up peaceful coexistence between Christianity and Islam in Cameroon as "a beacon to other African nations."

In a morning meeting with 22 representatives of Cameroon's sizable Muslim minority, Benedict said religion is the basis of human civilization and he returned to one of the key themes of his papacy, saying there is no incompatibility between faith and reason.

"Genuine religion ... stands at the base of any authentically human culture," he said. "It rejects all forms of violence and totalitarianism: not only on principles of faith but also of right reason."

The pope said that "religion and reason mutually reinforce one another" and urged Catholics and Muslims to work together "to build a civilization of love."

Unlike in neighboring Nigeria, where religious strife has often broken into violence, Christians and Muslims largely coexist without problems in Cameroon, a situation that drew Benedict's praise.

"May the enthusiastic cooperation of Muslims, Catholics and other Christians in Cameroon, be a beacon to other African nations of the enormous potential of an inter-religious commitment to peace, justice and the common good," he said.

The pope has often spoken of the need for religion to shun violence, but has refrained from pointing any finger at specific faiths since a 2006 speech delivered in Germany in which he linked Islam to violence.

Amid angry reactions from the Islamic world, Benedict expressed regret for any offense caused by his remarks and has since met several times with Muslim leaders from various countries.

Thursday's meeting with Muslim representatives at the Apostolic Nunciature, where Benedict has been lodging on his first African pilgrimage as pope, was closed to the press.

The Vatican spokesman, the Rev. Federico Lombardi said the atmosphere was "cordial and friendly" and that the Muslims issued a "warm greeting to the pope."

Benedict, like his predecessor John Paul, has set aside time in his foreign pilgrimages to meet with, or at least greet, representatives from various Christian communities as well as non-Christians.

The pope was next scheduled to celebrate Mass for thousands of faithful from Africa's expanding, vibrant Catholic flock in the capital's football stadium.

Yaounde's Amadou Ahidjo stadium holds 40,000 people, and thousands of men and women gathered at the site early Thursday, many wearing flowing robes with writing in French that celebrated the pope's visit.

Benedict's open-air Mass will be his first occasion as pope to be among a great crowd of faithful on the continent that is witnessing the church's biggest growth.

Before the visit, Benedict said he was traveling in Africa as a pilgrimage of peace, in hopes of inspiring faithful to work for social justice and fight the hunger and disease that afflict millions on the continent.

Since stepping off the papal plane on Tuesday, attention to Benedict's pilgrimage has been largely focused on the Vatican's refusal to advocate condoms as a way to help stop the spread of AIDS, which is ravaging Africa in a pandemic that affects millions.

On Wednesday, France and Germany sharply criticized Benedict's declaration aboard the papal plane that distributing condoms "increases" the AIDS problem.

The French Foreign Ministry said the statement could "endanger public health policies and the imperative to protect human life." The U.N. agency charged with fighting AIDS also spoke out in favor of condom use.