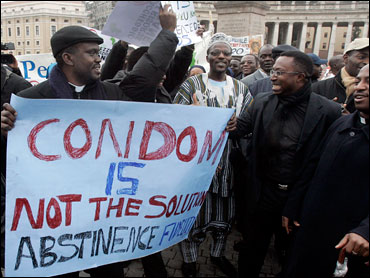 A Portuguese bishop has said that people with AIDS must use condoms to prevent the spread of the disease, apparently contradicting Pope Benedict XVI, who said the distribution of condoms could endanger public health.

Speaking to journalists, the Roman Catholic Bishop of Porto Manuel Clemente said condoms in such cases are "not only recommendable, they can be ethically obligatory."

On a trip to Africa earlier this month, the pope told reporters, "You can't solve (the AIDS crisis) with the distribution of condoms," adding, "On the contrary, it increases the problem."

The Vatican insists AIDS should be controlled by changing people's behavior.

"The great solution to the AIDS problem, like any other problem, has to be behavioral," Clemente said.

However, AIDS sufferers "have a moral obligation to prevent and not provoke the illness," he said at a monument unveiling in the port city Sunday.

Clemente is the second Portuguese cleric to contradict Pope Benedict XVI. Armed Forces bishop Januario Torgal Ferreira said a week ago that to ban condom use was equivalent to consenting to the death of many people.

He added that the people giving the pope advice "should be more learned."

The pope's comments have also come in for heavy criticism by the governments of France, Germany, the U.N. agency charged with combating AIDS and renowned medical journal Lancet.