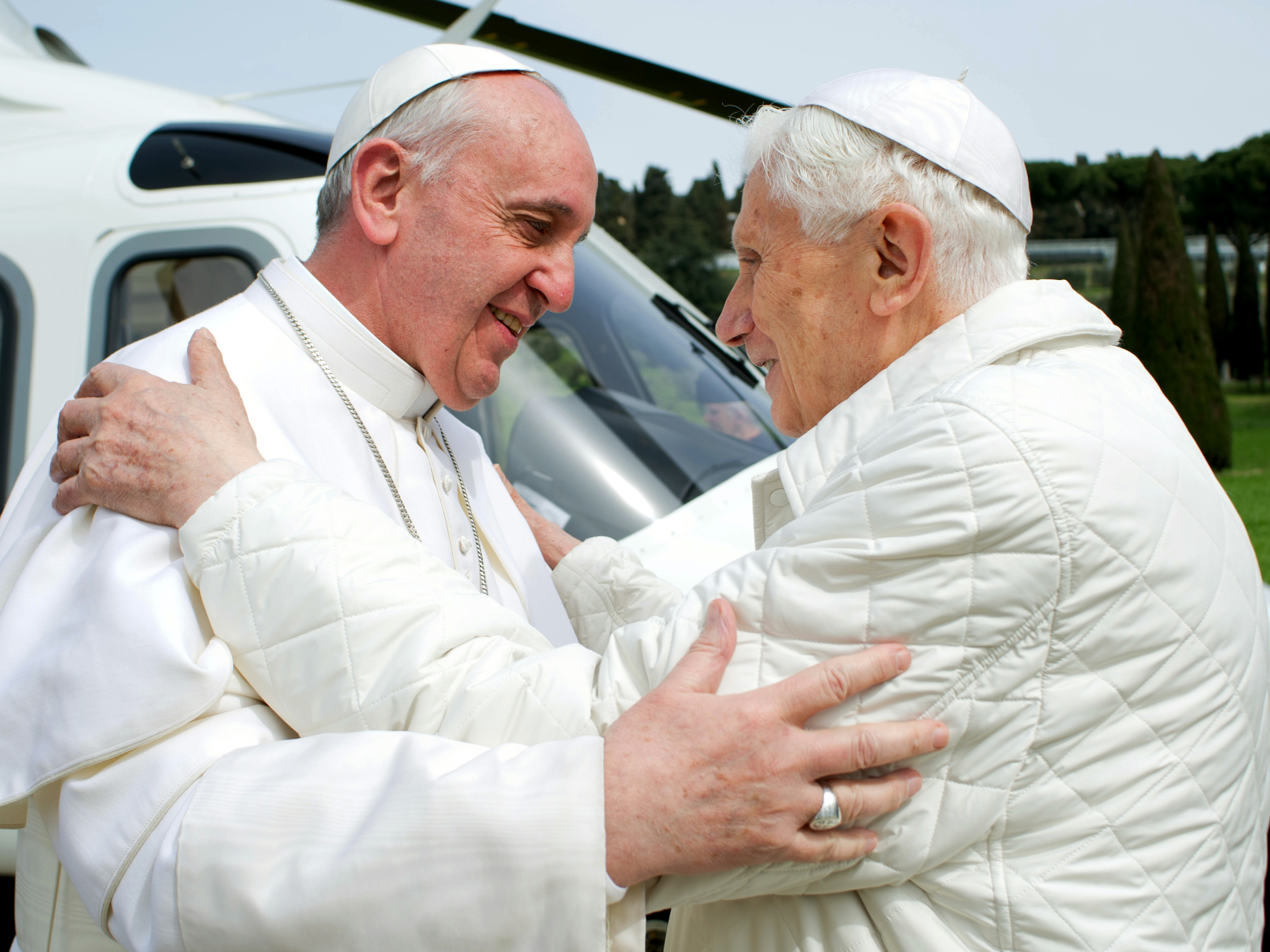 CASTEL GANDOLFO, Italy Pope Francis traveled Saturday to this hill town south of Rome to have lunch with his "brother" and predecessor Benedict XVI, a historic and potentially problematic melding of the papacies that has never before confronted the Catholic Church.

The two men dressed in white embraced warmly on the helipad in the gardens of Castel Gandolfo, where Benedict has been living since he stepped down Feb. 28 and became the first pope to resign in 600 years.

CBS News correspondent Allen Pizzey reports from Castel Gandolfo that it seems reasonable that the two would discuss the confidential report on Vatican corruption that Benedict commissioned and had held in secret for his successor to read.

The Vatican has announced that heads of departments who automatically lost their jobs during the interim between popes were being reinstated until other provisions are made, a clear signal that Francis is already getting on with the job of cleaning up the mess that contributed to Benedict's resignation, Pizzey reports.

In a series of gestures that ensued Saturday, Benedict made clear that he considered Francis to be pope while Francis made clear he considered his predecessor to be very much a revered brother and equal. They clasped hands repeatedly, showing one another the deference owed a pope in ways that surely turned Vatican protocol upside down.

Traveling from the helipad to the palazzo, Francis sat on the right-hand side of the car, the traditional place of the pope, while Benedict sat on the left. When they entered the chapel inside the palazzo to pray, Benedict tried to direct Francis to the papal kneeler at the front of the chapel, but Francis refused.

"No, we are brothers," Francis told Benedict, according to the Vatican spokesman the Rev. Federico Lombardi. He said Francis wanted to pray together with Benedict, so the two used a different kneeler in the pews and prayed side-by-side.

Francis also brought a gift to Benedict, an icon of the Madonna, and told him that it's known as the "Madonna of Humility."

"I thought of you," Francis told Benedict. "You gave us so many signs of humility and gentleness in your pontificate." Benedict replied: "Grazie, grazie."

Benedict wore the simple white cassock of the papacy, with a quilted white jacket over it to guard against the chill, but minus the sash and cape worn by Francis. Walking with a cane, he looked frail compared to the robust 76-year-old Argentine.

Outside the villa, the main piazza of Castel Gandolfo was packed with well-wishers bearing photos of both popes and chanting "Francesco! Francesco!" But the Vatican made clear they probably wouldn't see anything.

The Vatican downplayed the remarkable reunion in keeping with Benedict's desire to remain "hidden from the world" and not interfere with his successor's papacy. There was no live coverage by Vatican television, and only a short video and still photos were released after the fact.

The Vatican spokesman said the two spoke privately for 40-45 minutes, followed by lunch with the two papal secretaries, but no details were released.

All of which led to enormous speculation about what these two popes might have said to one another after making history together: Benedict's surprise resignation paved the way for the first pope from Latin America, the first Jesuit, and the first to call himself Francis after the 13th century friar who devoted himself to the poor, nature and working for peace.

That the former Cardinal Jorge Mario Bergoglio was second only to Cardinal Joseph Ratzinger in the 2005 conclave that elected Ratzinger pope has only added to the popular imagination about how these two popes of such different style, background and priorities might get along.

Perhaps over their primo, or pasta course during Saturday's lunch, they discussed the big issues facing the church: the rise of secularism in the world, the drop in priestly vocations in Europe, the competition that the Catholic Church faces in Latin America and Africa from evangelical Pentecostal movements.

During their secondo, or second course of meat or fish, they might have gone over more pressing issues about Francis' new job: Benedict left a host of unfinished business on Francis' plate, including the outcome of the top-secret investigation into the leaks of papal documents last year that exposed corruption and mismanagement in the Vatican administration. Francis might have wanted to sound Benedict out on his ideas for management changes in the Holy See administration, a priority given the complete dysfunctional government he has inherited.

Over coffee, they might have discussed future of Monsignor Georg Gaenswein, Benedict's trusted aide who has had the difficult task of escorting his old pope into retirement and then returning to the Vatican to serve his successor in the initial rites of the office.

Gaenswein, who wept as he and Benedict made their final goodbyes to staff in the papal apartment on Feb. 28, has appeared visibly upset and withdrawn at times as he has been by Francis' side. The Vatican has said Francis' primary secretary will be Monsignor Alfred Xuereb, who had been the No. 2 secretary under Benedict.

Both Xuereb and Gaenswein were present for lunch. Start to finish, the meeting lasted about 2 1/2 hours, with Benedict escorting Francis back to the helipad for the ride back to the Vatican.

Benedict's resignation — and his choices about his future — have raised the not-insignificant question of how the Catholic Church will deal with the novel situation of having one reigning and one retired pope living side-by-side, each of them called "pope," each of them wearing papal white and even sharing the same aide in Gaenswein.

Before Benedict announced his decision to be known as "emeritus pope," one of the Vatican's leading canon lawyers, the Jesuit Rev. Gianfranco Ghirlanda, penned an article suggesting that such a title would be inappropriate for Benedict since in renouncing the papacy he had "lost all the power of primacy" conferred on him by his election as pope.

The alternate title — which Vatican officials had suggested would be likely be chosen — was that of "emeritus bishop of Rome," since bishops routinely retire and are known as "emeritus bishops."

But Benedict opted instead for "emeritus pope," "Your Holiness" and also chose to keep wearing the white cassock of the papacy, leading to questions about both his own influence on the future pontiff and whether Catholics more favorable to his traditional style might try to undermine his successor's authority and agenda by keeping their allegiance to the old pope.

Clearly aware of that potential, Benedict in his very last meeting with his cardinals on Feb. 28 pledged his "unconditional reverence and obedience" to the then-unknown future pope, who was nevertheless in the room.

Lombardi said he understood Benedict repeated that pledge of obedience to Francis on Saturday. Asked how the popes addressed one another, Lombardi demurred, saying he didn't think they addressed one another as "Your Holiness" or "Pope," saying the exchange was too familiar and warm for such titles.

After a few months in Castel Gandolfo, Benedict is to return to the Vatican to live in a converted monastery in the Vatican gardens, just a short walk from St. Peter's Basilica and the shrine devoted to the Madonna where Francis went to pray on one of his first walks as pope.

Despite Benedict's expressed intent to fade away, Francis on virtually every occasion afforded him has made clear he has no intention of letting his "venerable predecessor" disappear from memory: Francis called Benedict right after his election, urged prayers for him in his first papal Masses, and called the former Joseph Ratzinger to congratulate him on the feast of St. Joseph on March 19.

The Vatican has similarly made clear that the ex-pope hasn't completely lost interest in the matters of the church, following on television Francis' inaugural appearance on the balcony of St. Peter's Basilica after his election, when he charmed the crowd with a simple "Brothers and sisters, good evening."

The two men couldn't be more different in style and background: The Argentine-born Francis has made headlines with his simple gestures — no papal regalia, simple black shoes, paying his own hotel bill — and basic message that a pope's job is to protect the poor.

As archbishop of Buenos Aires, Bergoglio worked in the slums, celebrating Masses for prostitutes and drug addicts. He plans to celebrate Holy Thursday Mass this week at a juvenile detention center, where he will wash the feet of 12 inmates in a show of humility echoing that of Jesus.

The German-born Benedict is an academic, one of the world's leading theologians who spent more than 30 years in the frescoed halls of the Vatican where he was its chief doctrinal watchdog and then its pope. His primary concern was to remind Christians in Europe of their faith and bring back a more traditional Catholic identity, and with it many of the brocaded trappings of the papacy. His Holy Thursday Masses included the traditional foot-washing, but it involved clerics at the St. John Lateran basilica.

While there is a difference in style, there is a "radical" convergence between the two men in terms of their spirituality, according to Civilta Cattolica, the Italian Jesuit magazine whose articles are approved by the Vatican before publication.

"They are two figures of the highest spirituality, whose relationship with life is completely anchored in God," the magazine wrote. "This radicalness is shown in Pope Benedict's shy and kind bearing, and in Pope Francis it is revealed by his immediate sweetness and spontaneity."