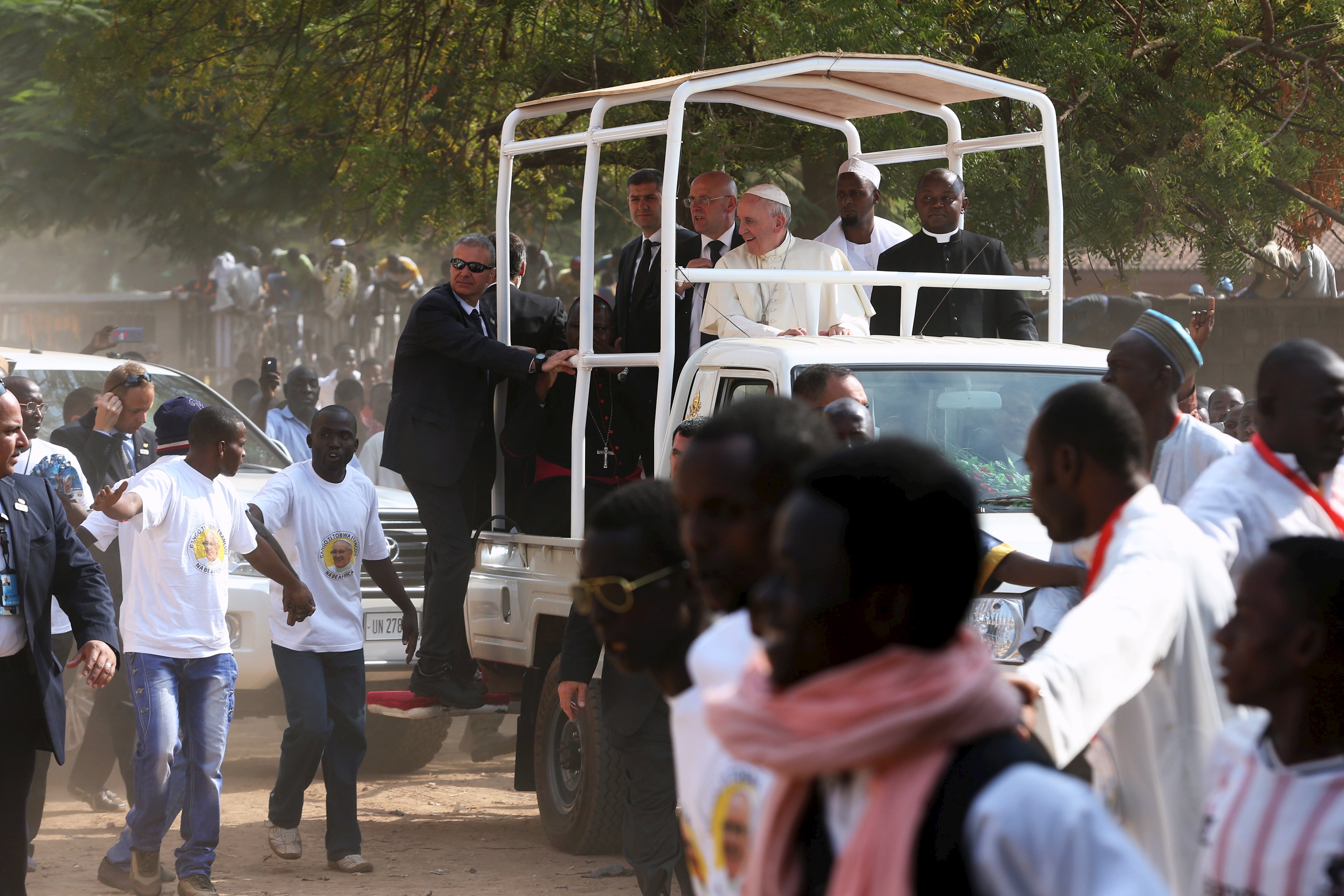 ABOARD THE PAPAL FLIGHT -- It is possible to surprise even a pope.

Asked by a Kenyan journalist to name the most memorable moment of his first visit to Africa, Pope Francis replied that he had many, but first and foremost: "The crowds, the capacity of having a party on an empty stomach. For me, Africa was a surprise. I thought God surprises us, but also Africa surprises us."

The exchange came in the now-traditional press conference on the homeward leg of a papal trip.

After five days of travel that included three countries, five masses and 19 speeches -- several of them in 90-degree heat -- Pope Francis stood at the front of the press section of the plane (read: Economy at Business Class prices) and answered 12 questions in three different languages in a session lasting an hour.

It started 20 minutes after takeoff, and only hours after he'd completed what was the most dangerous event on any trip by a modern pontiff.

Francis rode an open popemobile across what is essentially the front line of an ongoing civil war to visit a mosque in a part of the Central African Republic's capital city known as PK5; the last Muslim enclave in Bangui, where tensions are high after months of violence.

"Christians and Muslims are brothers and sisters," he said after meeting Muslim leaders at the Koudoukou mosque. "Together we must say no to hatred, to revenge and to violence, particularly that violence which is perpetrated in the name of a religion or of God himself."

He ended with the word "salaam," Arabic for peace.

Hopes and sentiments aside, whenever he moved Francis was surrounded by an armed detail of United Nations peacekeepers, Vatican gendarmerie and his own personal bodyguards.

One couldn't but feel sorry for the phalanx of men in dark suits who had to trot beside the popemobile, bathed in sweat and trying to keep an eye on everyone and everything that could be a potential threat.

A well-placed source said one of those riding on the running boards of the popemobile was an American security agent attached to the U.N. peacekeeping mission in the Central African Republic (CAR), which took chief responsibility for the pope's safety on his visit. They also built the popemobile.

Right up to the last moment there were constant and dire warnings that the stop in CAR should be confined to a quick Mass at the airport.

Instead, Francis did his usual thing -- a packed schedule featuring impromptu drop-ins to meet the sick and wretched of his host nation.

When he arrived in the capital city of Bangui, Francis said he had come as "a pilgrim of peace, an apostle of mercy."

His constant theme was reconciliation and peace; one which, to judge from the adoring and jubilant crowds that lined his routes along dirt roads and pot-holed streets and filled every event, ordinary people desperately wanted to hear.

Wracked by a two-year civil war, CAR is a country teetering on the edge of becoming a failed state. Half a million of its people have become refugees in neighboring countries, and a similar number are huddled in squalid camps inside the country, dependent on food aid and the protection of three thousand U.N. peacekeepers and 900 French troops.

How these displaced people are viewed in the country depends on where you live -- and worship.

Outside the entrance to a sports stadium where Francis conducted his final Mass of the trip, a ragged man held up a hand-written cardboard sign that said in French: "Damn the U.N. and the French. They are the cause of all our troubles."

Near the mosque in PK5, however, a reporter on the Vatican press pool accompanying the pope spotted two French flags and a banner that read, again in French: "Thank you to the U.N. and the French."

Evidently not everyone got Francis' message or reconciliation, or at least they seem not to be putting it into practice just yet.

But no one is likely to accuse him of not trying.

And when the Q&A on the plane was over, Francis thanked the 74 journalists on the flight for their work.

"Now lunch is on its way, but I hear you are fasting today because you have to work," he said with a smile. "Thanks again for your work, your questions and, I only wanted to say; I answer what I know. When I don't answer, it is because I don't know. I don't invent stuff. Thank you."