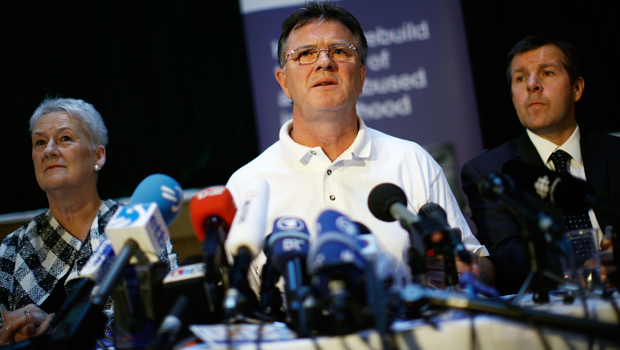 VATICAN CITY -- Pope Francis' sex abuse advisory committee voted Saturday to sideline one of its members, a high-profile abuse survivor who had clashed with the commission over its mission.

Peter Saunders, a British advocate for victims, had been highly critical of the Vatican's slow pace of progress in taking measures to protect children and punish bishops who covered up for pedophile priests. He had also wanted the commission to intervene immediately in individual cases, rather than just craft long-term policies to fight abuse.

During a commission meeting Saturday, "it was decided that Mr. Peter Saunders would take a leave of absence from his membership to consider how he might best support the commission's work," the Vatican said.

The decision is a blow to Francis' efforts to show that he is tough on abuse, since the presence of Saunders and another abuse survivor, Marie Collins, had given the commission credibility.

In an interview with The Associated Press, Saunders said commission members, with one abstention, asked had him to step aside after concluding they could no longer trust him to work within the scope of the commission's mandate.

"I do not want to prevent the work of the commission, the good work that the commission is doing from going ahead, so I had no choice but to step aside," he said.

He said the Vatican's inaction in the face of continuing cases of children being raped and molested "made me lose faith in the process and lose faith in Pope Francis."

His departure leaves Collins as the lone abuse survivor on the commission, which was formed in 2013 to advise the Vatican on protecting children, educating church personnel and parishioners about abuse, and keeping pedophiles out of the priesthood.

Collins told the AP it was a "sad day" for the commission. She acknowledged Saunders' complaints about the pace of work but said the overall mission was still important.

"It is slow. It's not going to make changes overnight. And there are frustrations in that," she said. "But if we can change policy and get policies put in place that will stick around the world that will make children safer in the future, then it's worth making time to get it right."

The commission was formed after victims' groups questioned whether the Argentine pope, who had never dealt with an abuse case, really understood the scope of the scandal. But the commission took a big step last year when it successfully proposed that the Vatican create an in-house tribunal to hear cases of bishops accused of failing to protect their flocks.

The commission had been highly critical of Francis' decision to appoint a Chilean bishop despite allegations from abuse survivors that he had covered up for the country's most notorious pedophile, the Rev. Fernando Karadima.

One of Karadima's victims, Juan Carlos Cruz, joined Saunders on Saturday in Rome in hopes of speaking to the commission but was refused. Cruz had been proposed as a possible commission member but emails published in the Chilean media showed how the Chilean church hierarchy worked to keep him off the panel.