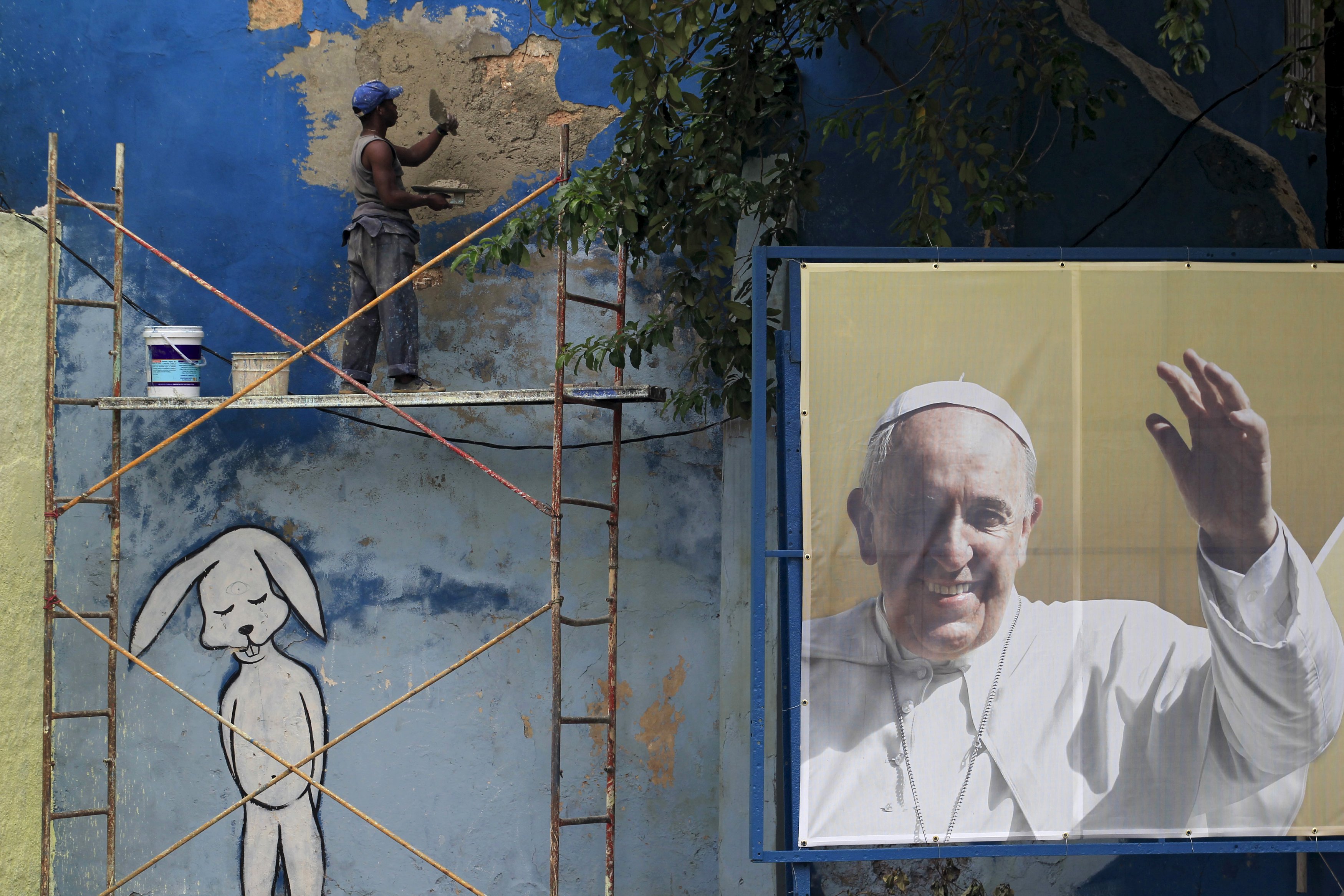 ROME -- After playing a pivotal role in the recent re-establishment of political relations between Cuba and the U.S., Pope Francis embarks Saturday on his maiden voyage to the two countries.

In a whirlwind three-day visit to Cuba, the pope will visit three cities, celebrate two masses and meet with youth, families, and clergy.

But notably absent from the schedule are visits which have become routine on Francis' foreign trips: meetings with prisoners and the poor or downtrodden. He also has no plans -- yet -- to meet Cuban dissidents, a fact that has already drawn criticism.

The pope will deliver at least seven speeches in Cuba. Although his message will be primarily pastoral, many will be listening to see whether the outspoken Francis will use the opportunity to criticize the Cuban regime for its lack of political and religious freedom.

A senior Vatican official told CBS News on Friday that, starting with his speech at the welcome ceremony at Havana airport, Francis will hold Cuba and the U.S. up as examples to the rest of the world that reconciliation is possible, even after decades of alienation and animosity.

But along with the praise, Francis is to dole out some criticism.

The official said that, although Francis would not confront the Cuban regime directly, careful listeners will be able to discern "veiled criticism" in his speeches.

"The pope will do this by talking about the importance of religion and religious expression, and how they need to be seen in a positive light. He'll say the church needs more space, for the good of the people," the official said.

In 1961, Fidel Castro closed all Catholic institutions in Cuba and expropriated many church properties. For many years those who openly declared their Catholicism were excluded from the Communist party and risked losing their jobs or educational opportunities.

This caused many to deny their faith. Although approximately 60 percent of Cubans are Catholic, only an estimated 5 percent attend church regularly.

The official said the pope would offer words of "encouragement and hope" to Cuba's Catholics.

He said the Vatican expected to be criticized in turn for not being more direct about human rights, especially by the Cuban population in the United States.

Dissidents on Cuban soil didn't even wait for him to arrive. The pope's decision not to meet opposition groups drew fire from the hardline "Estado de SATS" dissident group, the leader of which told The Associated Press this week that Francis "should exert more pressure."

"In many cases political systems have come under international pressure that has resulted in change," Antonio Rodiles told the AP, "and that's what needs to happen with Cuba."

But the Vatican official told CBS News on Friday that tackling thorny issues head-on with the Cubans would be counter-productive, and that results were best achieved by taking gradual steps.

"New people will gradually step in (in Cuba), and that may offer the opportunity for greater openness. The process is very slow, but it's happening," the Vatican official said. "If the pope goes against the regime, everything will be blocked. The regime needs the church in order to move forward with their timid and fragile ideas on economic reform."

Although the pope will not publicly take the Cubans to task, he is likely to speak more openly to President Raul Castro when they meet privately.

"The Holy Father has the courage and the resourcefulness to say privately what he thinks to the head of state. He will tell Raul what he thinks," the official assured. "The Cuban leaders accept criticism and different points of view, when you're talking one-on-one you can say these things, there is a dialogue. You can talk about political as well as ecclesial matters. But you can never criticize them publicly."

The official pointed to the recent release of 3,522 Cuban prisoners as an example of how this soft diplomacy works.

"The church specifically requested the release of the prisoners, but the church did it discreetly. In church, several released prisoners got up and said, 'if I'm here it's only because of the church and the pope.'"

Significantly, the official said the Vatican was working on a formula that would allow the pope to meet the "Ladies in White," a group of female relatives of jailed dissidents who protest by attending Sunday mass and then marching silently through the streets, wearing white to symbolize peace.

"We have put forth a proposal to the Cubans regarding the Ladies in White. This is being discussed. Let's see if the Cubans accept it," he said.

The Ladies in White had requested a meeting with Pope Benedict during his visit to Havana, but it never happened. In the run-up to his arrival, 70 members of the group were arrested, and some were beaten. Benedict was heavily criticized for his refusal to meet with the women, as well as his silence on the crackdown on the Ladies and other dissidents.

The official told CBS News the Vatican is hopeful that, over time, Francis' visit will help usher change in the island nation.