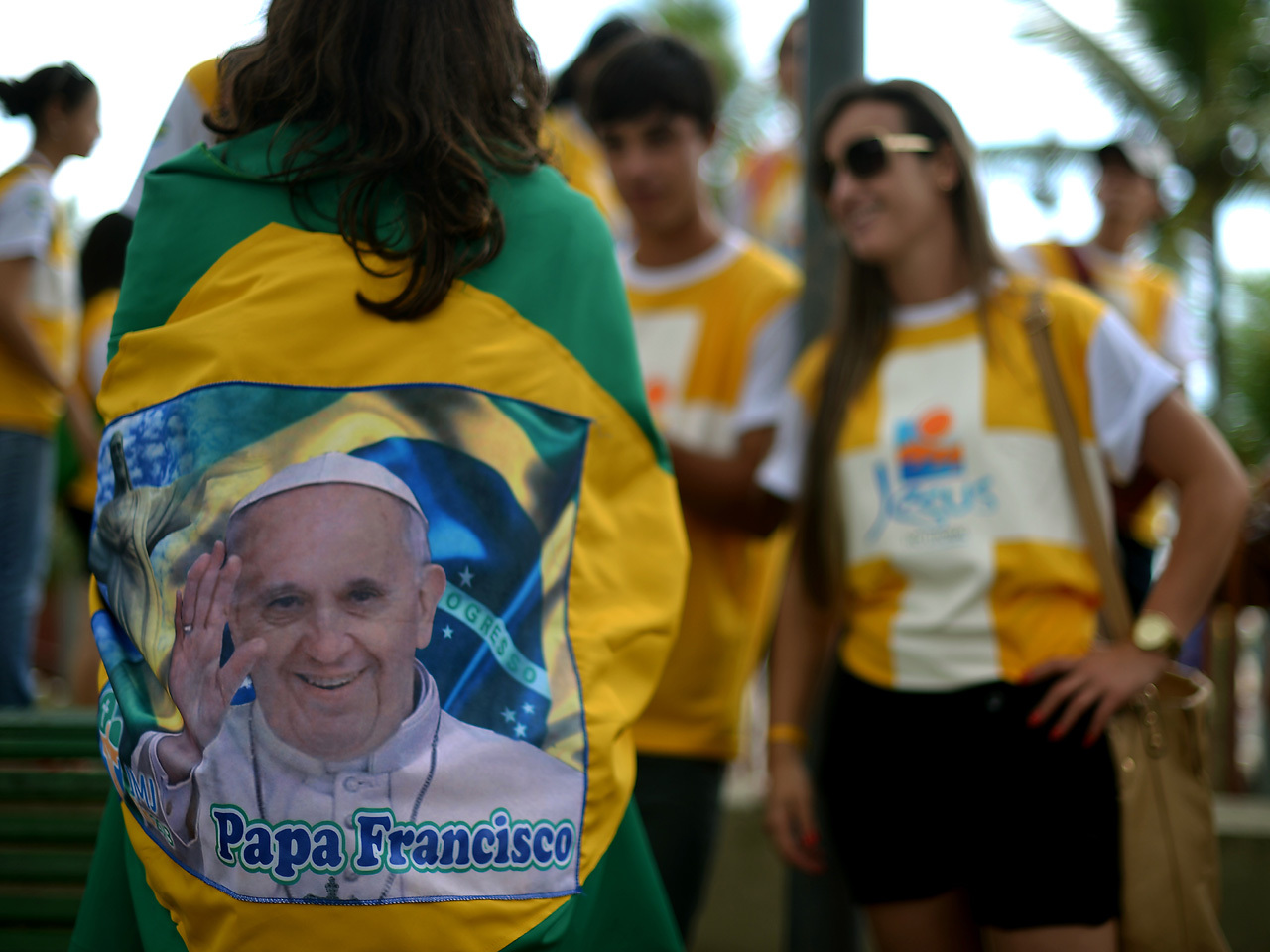 RIO DE JANEIRO Pope Francis lands Monday in a Brazil electric with anticipation for the pontiff's first international trip, heading into the open arms of his home continent where mammoth crowds are expected to celebrate Mass on Rio's Copacabana beach.

The pope is coming to meet with legions of young Roman Catholics converging on Rio for the church's World Youth Day festival, believers whose behavior so far hasn't been typical of the normal tourists in this seaside Sin City known for hedonistic excess.

More than 1 million people are expected to pack the white sands of Copacabana to celebrate Mass with Francis. He also will visit a tiny chapel in a trash-strewn slum, and grassroots Catholics love that he plans a side trip to venerate Brazil's patron saint.

"I'm here for faith! I'm here for joy! And I'm here for the first Latino pope!" Ismael Diaz, a 27-year-old pilgrim wrapped in the flag of his native Paraguay, said as he bounded down the stone sidewalks of Copacabana hours ahead of Francis' arrival.

Diaz gave high fives to four fellow pilgrims, then turned toward local beachgoers who looked on while calmly sipping green coconut water and staring from behind dark sunglasses.

"I'm here because I have the force of God in me and want to make disciples of all. Arghhhhhhhhhh!" he yelled, lifting his head and howling into Rio's hot, humid air before flexing his arms and going into a bodybuilder's pose.

Francis would have an easy time of it if all Catholics shared Diaz's fervor. But Diaz and his fellow pilgrims are the exception to the rule in Brazil and much of Latin America, a region with more faithful than any other in the world but where millions have left the church for rival Pentecostal evangelical churches or secularism.

A poll from the respected Datafolha group published Sunday in the newspaper Folha de S.Paulo said 57 percent of Brazilians age 16 and older call themselves Catholic, the lowest ever recorded. Just six years ago, when Pope Benedict XVI visited, a poll by the same firm found 64 percent considered themselves among the faithful. In 1980, when Pope John Paul II became the first pontiff to visit Brazil, 89 percent listed themselves as Catholics, according to that year's census.

Pentecostal evangelicals stood at 19 percent of the population in the latest poll, rising from virtually nothing three decades ago by aggressively proselytizing in Brazil's impoverished slums.

Beyond the numbers who claim one faith or another is the huge gap in the level of participation in the different churches, a fervor factor that deeply troubles the Catholic Church. The Datafolha poll said 63 percent of Pentecostal evangelicals report going to church at least once a week, while only 28 percent of Catholics say they go to Mass weekly.

Datafolha interviewed 3,758 people across Brazil on June 6-7 and said the poll had a margin error of two percentage points.

In his few months as pontiff, the 76-year-old Francis has demonstrated an easy ability to connect with people, in particular with young Catholics, demonstrating humility and a warmth the faithful feel is genuine. Church leaders hope his Brazil trip will deepen that appeal.

Keeping to his example that the Catholic church must be humble, Francis carried his own black hand luggage as he boarded a special Alitalia flight from Rome's Leonardo da Vinci airport on Monday.

"Every pope is different, and Pope Francis is showing himself to be extremely charismatic, with a language that is simple and direct," Sao Paulo Cardinal Odilo Scherer said. "I absolutely think there is renewed happiness within the church that began with the election of Pope Francis."

Fernando Altemeyer, a theologian at the Catholic University of Sao Paulo, said that warmth and understanding is entirely related to Francis being the first pope from Latin America, where he's had more exposure to the harsh realities of life on the continent than European popes of the past.

"It allows him to understand and promote a Catholicism that's felt in the body, that's visceral," Altemeyer said. "That changes a Catholicism that for hundreds of years has been felt more in the mind, that's been a very European Christianity."

All of which gives even more force to a New Evangelization effort that was pushed by John Paul II and picked up steam under Benedict, with the World Youth Day and its theme of "Go and make disciples of all nations" expressing the desire to more ardently spread the Gospel.

Playing out in parallel to the papal visit is political unrest in Brazil, where widespread anti-government protests that began last month have continued and are expected to take place right outside Rio's Guanabara Palace, the seat of state power where Francis is to meet with President Dilma Rousseff on Monday evening shortly after his arrival.

With the exception of gay rights groups and others angered by the church's doctrine against abortion and same-sex marriages, the target of most protesters won't be Francis but the government and political corruption. The pontiff is said to support Brazilians peacefully taking to the streets, and when he served as a cardinal in Buenos Aires he didn't shy from conflict with Argentina's leaders as he railed against corruption.

The pope will likely avoid hot-button issues like abortion and same-sex marriages while in Brazil, and focus on his message that the church should put its attention on the poor and that clergy must lead a humble life.

Brazil allows abortions only in cases of rape or risk to a mother's life or if a fetus is brainless, and the nation's supreme court in 2011 approved civil unions for same-sex couples. State courts have since allowed those unions to become full-fledged marriages.

The Catholic Church is not as active in politics in Brazil as it is in other Latin American nations, though it strongly opposes any efforts to loosen abortion laws and took part in the legal argument against civil unions when the matter was before the top court.

When Francis talks with Rousseff, they are likely to focus on the poor. Upon taking office, the Brazilian leader declared that eradicating extreme poverty was her top goal as president, and she has expanded a network of social welfare programs that have helped lift almost 30 million Brazilians out of poverty in the last decade.

"The good thing from a social perspective is that he understands the increasing stratification of wealth in Latin America," said Joseph Palacios, a sociologist at Georgetown University and former Catholic priest who has studied the church.

"Unlike his predecessors, who had a theoretical understanding, Francis has a pastoral understanding honed by living and working in working-class neighborhoods of Buenos Aires. All of his understanding of poverty and other social issues appear to be based on his experiences, not theory or doctrine."

That's evident to Maria Nascimento, a 60-year-old Catholic living in the Varginha slum where Francis will pay a visit this week.

"God chose wisely when he decided to send this humble man to lead the church. He's loved in this community because he's talking about poor people," she said, standing in her kitchen where photos of grandchildren's baptisms were stuck to her refrigerator with magnets.

"There's going to be a huge impact on Brazil after he has come and left, after his feet have walked these streets in our slum. He's going to help the church in Brazil, the love here for him is growing so fast."