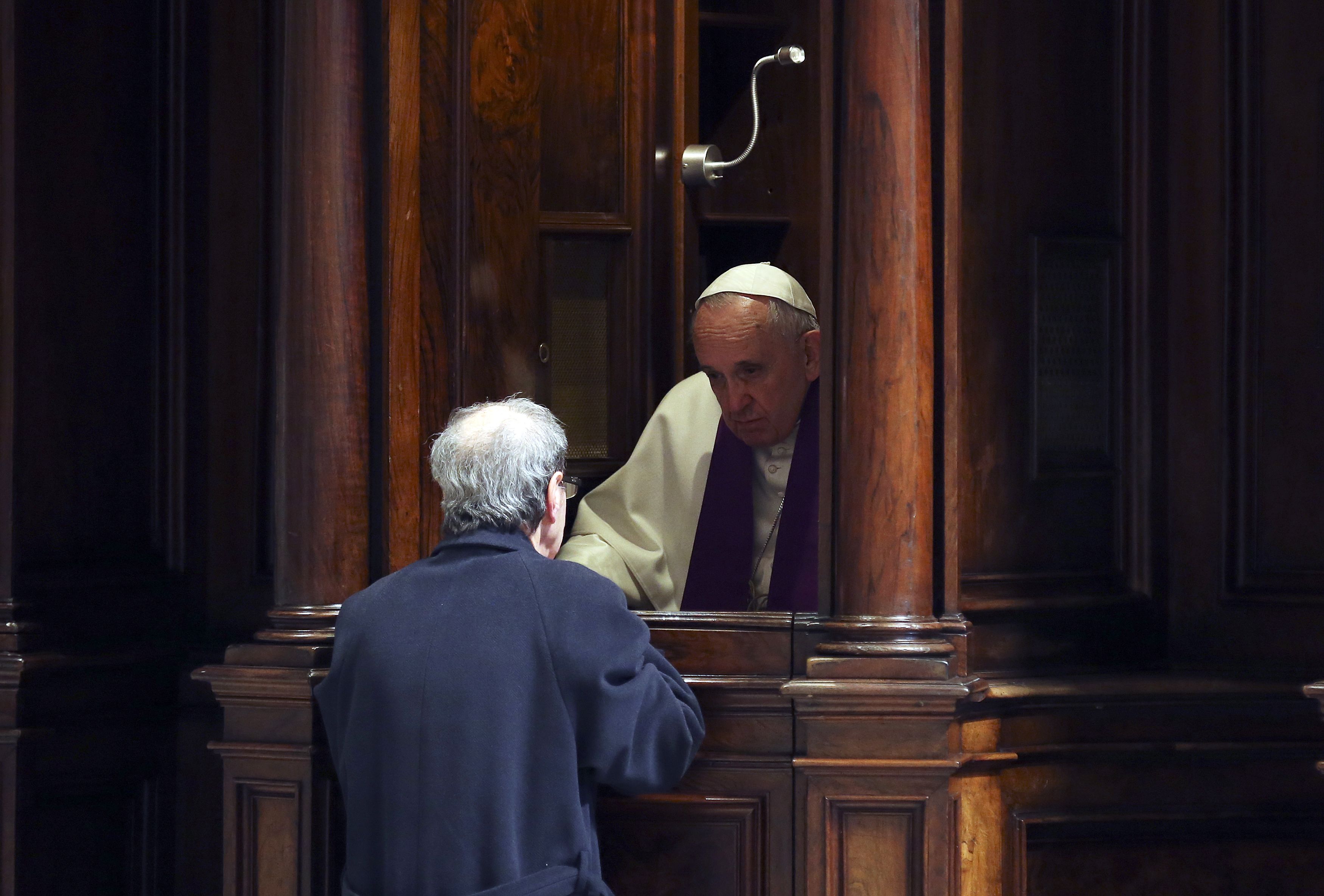 ROME -- Pope Francis marked his second anniversary as leader of the Catholic Church by meting out a little of what he talks about so much: forgiveness, mercy and compassion.

The pope heard confessions from the faithful in St. Peter's Basilica. He did the same thing last year, stunning the world by confessing in public, the first pope ever to do so.

On Thursday, he told a group of confessors that without a doubt, the sacrament of confession is the one that "best shows the merciful face of God" and confession should not be "a form of torture but rather a liberating encounter."

Francis has made mercy the bedrock of his ministry, putting a merciful, welcoming face on a church that had been plagued by sex scandals and allegations of financial corruption and mismanagement. Furthermore, when he assumed the papacy many Catholics felt alienated from a church they saw as out of touch and forbidding.

There's been an undeniable turnaround, what some have even called a revolution.

Indeed, that "elsewhere" is the pope himself, and the attention has been overwhelmingly positive. Francis has graced the covers of Rolling Stone, Esquire and Time Magazine, which dubbed him Person of the Year in 2013. It took the enormously popular John Paul II 16 years to win that accolade.

In fact, in just two years, Francis' popularity has come very close to that of Saint John Paul II.

A recent poll showed that 9 out of 10 American Catholics approve of him, as do 7 out of 10 Americans of all religions -- or none at all. Attendance at Vatican events has soared. In the Philippines in January, Francis presided over the biggest papal event in world history, drawing over 6 million pilgrims to a mass in Manila.

"He's changed my faith," lapsed Catholic Rossella Devivo said. "I had absolutely no intention of entering a church, but since he's been pope, I have grown more religious. This is absolutely incredible for me. He has brought me closer to the church."

Francis' simple lifestyle and humility have endeared him to the masses, as has his focus on the poor. Just three days into his papacy, he wished for "a poor Church, for the poor," and has repeatedly spoken out against economic injustice and a "culture of waste" which values profit over people.

"He has breathed life for the poor into the church," says Monsignor Anthony Figueiredo, a CBS News consultant and theologian on the staff of the Pontifical North American College at the Vatican. "This pope isn't known for building St. Peter's Basilica or the Sistine Chapel. He's known for building showers for the tramps, and visiting parishes in the most peripheral areas of the city, areas suffering from drugs and crime."

He's also known for his open-door policy, best encapsulated in his now famous, "who am I to judge" quote regarding homosexuals.

"I think he has a non-judgmental approach towards human beings, and that he puts more importance on forgiveness than the application of rules," says Joseph Duggan, a non-practicing Catholic who views Francis as a great leader.

Francis' free speech and spontaneous gestures have humanized him to many. The pope says he simply has to remain himself.

"If I were to try to act differently, I'd look ridiculous," he told a friend. But those same qualities have also caused confusion.

One Catholic wrote to a priest friend: "Though I know what he says has been taken out of context, now I have 13 nephews and nieces saying, 'the pope is now open to gay rights and marriage. The pope is saying we can thoughtfully use birth control. The pope says we only need to have 3 kids at most."

Some conservative Catholics say they're concerned that Francis may be eroding the Catholic identity.

"When he says he wants the church to be more 'merciful,' is he signaling that traditional understandings of church teachings on these issues are to be thrown under the bus in the interest of packing churches with people who don't really believe what the Church teaches?"

But supporters say Francis is simply encouraging debate on issues that were considered off limits for years. The pope has said he is a "loyal son of the church," and has reaffirmed the church's ban on birth control, women priests and married clergy, while indicating an openness to re-evaluating the ban on divorced and remarried Catholics taking communion.

"This pope is actually on the same page as previous popes," says Monsignor Figueiredo. "Benedict worked in the curia, he approached doctrine from an orthodox view. John Paul II was a philosopher, so he approached it from a philosophic view. Francis is a pastor, so he's approaching it from a pastoral view. We may well see a change, but it will not be in the doctrine but in the way we approach people."

Opinion is also divided on how the pope has dealt with the issue of sex abuse.

In 2013, he established a commission of clergy and lay experts -- two of whom are abuse victims -- to improve procedures. In February of this year, he wrote to the world's bishops asking them to take "whatever steps necessary" to protect children, saying that "priority must not be given to any other type of concern, whatever its nature, such as the desire to avoid scandal."

Francis was the first pope to say the words that many had waited decades to hear: that bishops would be held accountable for covering up clerical sex abuse. Many believe the litmus test of the pope's commitment to accountability will be the fate of Bishop Robert Finn of Kansas City, convicted by a grand jury in 2012 for failing to report a priest suspected of child sex abuse. Critics point out that, so far, Finn remains in his position.

Others wish the pope would move more swiftly on the issue of women in the church. While Francis has unambiguously declared that women cannot be ordained, he has spoken about enhancing their role in the church and putting them in leadership positions.

Yet, at this time, only two women actually hold high positions in the curia, the Vatican's administration, and the percentage of women employed in the Holy See stands at 18.

Francis has clearly shown that even in the Vatican, change can happen.

He has moved decisively to clean up Vatican finances, streamline Vatican bureaucracy and make the Vatican a more democratic place, decentralizing power in the church by involving bishops from around the world in consultative summits called "synods" to discuss issues of great importance.

"Before it was very difficult," one Congolese bishop told the National Catholic Reporter. "For me, this is a big, big change. We find now that what we are living is listened to here in the Vatican."

And the pope is changing the face of future Catholicism by appointing cardinals from far-flung places like Tonga and Cape Verde.

As one Vatican observer put it, it's not just that these guys will elect the next pope -- one of them could actually be the next pope. Revolutionary, indeed.