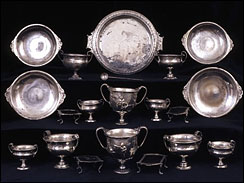 Decorated cups and fine silver platters were once again polished and on display Monday as archaeologists unveiled an ancient Roman dining set that lay hidden for two millennia in the volcanic ash of Pompeii.

In 2000, archaeologists found a wicker basket containing the silverware in the ruins of a thermal bath near the remains of the Roman city, said Pietro Giovanni Guzzo, head of Pompeii's archaeological office.

The basket was filled with the volcanic ash that buried the city when Mount Vesuvius erupted in A.D. 79. When experts X-rayed it, they saw the objects preserved in the ash, which killed thousands of people but kept the town almost intact, providing precious information on domestic life in the ancient world.

Experts have spent the last five years extracting and restoring the 20 pieces of silver that were left behind by their owners as they fled the eruption, Guzzo said as he presented the treasure to authorities and the media in Rome.

During the following months, researchers will study the set and hope to learn more about the city's economic status at the time of its destruction, Guzzo said.

The pieces will then go on display in 2006 at the National Archaeological Museum of Naples, 18 miles north of Pompeii, he said.