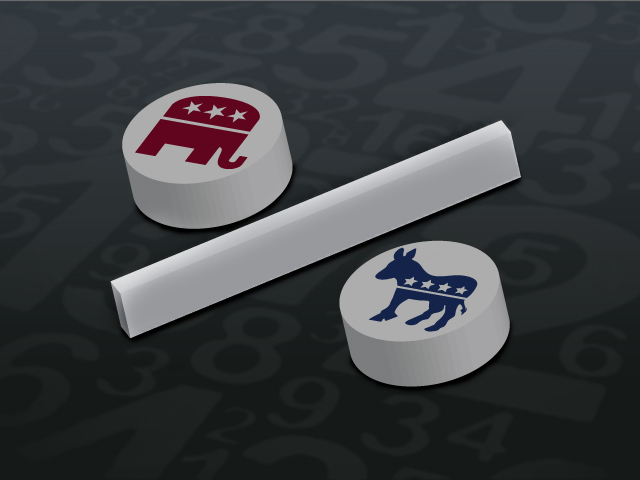 Being the party out of power in Washington has no shortage of negatives and pollsters from each party agreed Tuesday that the Republicans' main drawback is that they lack a singular spokesperson for their ideas.

Republican Ed Goeas and Democrat Celinda Lake broke down the latest George Washington University Battleground poll, which revealed that while Republicans were competitive with Democrats on many issues, that when it came to explaining their intentions, Republicans are failing.

Goeas cited the minimum wage debate as the most recent example of the Republican communication conundrum. "I think you'd find Republicans very supportive of minimum wage but not at a federal level. It is hard to conceive of why Oklahoma would make the same minimum wage as Los Angeles or New York City," he said.

Regarding income inequality, an issue that Democrats have featured during this year's midterm election campaigns, Goeas said it's one that Republicans can also speak to but have yet to effectively communicate.

"One of the Governors that is my favorite out there is Mary Fallin, " Goeas said of the current governor of Oklahoma. "She has been making the case on income inequality that put the focus on bringing better paying jobs and in the process she has not only raised dramatically the per capita income but she is 44 percent ahead of the national average, just in the last three years." There are differences on economic policy, Goeas concluded -- ones that "Republicans are really ready to talk about" but are hindered by their struggle to hone a message.

"What's interesting to me is fifteen years ago, you would have been having the reverse critique of the Democrats. Ten, 15, 20 years ago, we were the ones who headed straight for our solutions and never said what our values were," Democratic pollster Lake said at the briefing, "Value style is much more powerful than the policy side."

A floundering communications strategy is a flaw that Republicans may be able to overcome this election cycle though, as the poll indicates several alarming voter trends that may be fatal for Democrats, specifically Democratic voter enthusiasm - or lack of it.

Lake dwelled on Democrats' turnout disadvantage, pointing specifically to Republican David Jolly's win over Democrat Alex Sink in Florida's special House election earlier this month. In the poll, Republicans have a 7-point advantage in voter intensity over Democratic voters with 64 percent of Republicans saying they're extremely likely to vote in November's midterms, compared to 57 percent of Democrats. A new CBS News poll out Tuesday echoed those figures: Seventy percent of Republican voters are already enthusiastic about voting in November (including 27 percent who are very enthusiastic), compared to 58 percent of Democrats. While such data isn't predictive, if this disparity lingers into November, it would have a decisive impact.