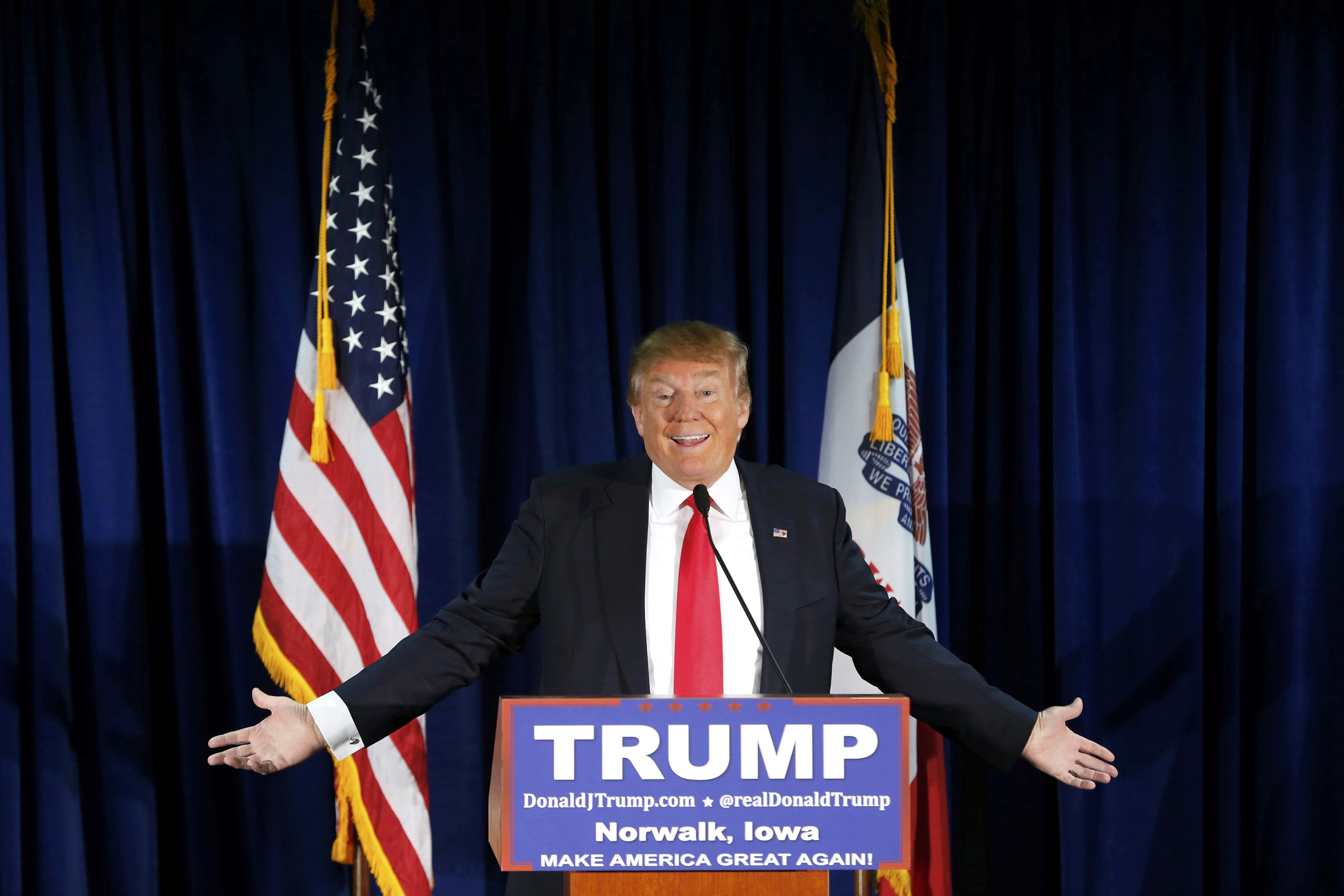 Just over a week before the first votes are cast in the Iowa caucuses, Donald Trump has regained his lead over Texas Sen. Ted Cruz in the state of Iowa. Trump now holds a 5-point lead over the Texas Republican, with Florida Sen. Marco Rubio lagging far behind in third place.

In New Hampshire, the race remains unchanged at the top, with Trump holding a commanding double-digit lead over his two closest-but-still-distant rivals Cruz and Rubio, who are locked in a tight battle for second place. Further down, Ohio Gov. John Kasich has edged past New Jersey Gov. Chris Christie into fourth place.

Looking ahead to South Carolina, Trump continues to hold a double-digit lead over Cruz, his closest competitor in that state.

About three in four Republican primary voters in each state say their minds are mostly made up; about a quarter could still change their minds. Eight in ten of Trump's and Cruz's supporters in Iowa say their support is strong. Those remaining Trump supporters who have not firmly decided are still waiting to be convinced that he can be an effective president, while Cruz supporters who have not firmly decided still want to make sure Cruz can win in November.

In Iowa, Trump has retained his own support from last month while cutting into Cruz's edge among both tea party identifiers and evangelicals. The latter group is 38-30 for Cruz now and was 47-28 last month.

There are big differences in the rationale behind backers of Cruz and Trump: For Trump's support the top reason is fixing the economy, and many also want to "shake up the system." For Cruz the top reason is finding a president who will defend their religious faith. Trump leads among conservatives; Cruz leads among the smaller group that identifies as "very" conservative.

In a sign of how the two candidates running as "outsiders" have channeled primary voters' feelings so far, three in four Republican primary voters say both Trump and Cruz "get it" -- that is, that they understand how they and people like them feel right now. Trump has the edge in this regard particularly in New Hampshire.

Trump's support has been steady, but converting the supporters of other candidates may prove difficult for him: Most Republican primary voters who are not already supporting Trump say they could never consider voting for him.

In contrast, most Republican primary voters in Iowa and South Carolina who are not already supporting Cruz say they could consider him (most say they wouldn't consider voting for Cruz in New Hampshire). Trump leads in all three states despite the fact that many Republican primary voters -- mostly, those not voting for him -- think he would be too extreme in his approach in trying to achieve his goals. About half say this of Trump -- far more than any other candidate.

But electability is important to Republican primary voters as well. Winning the presidency in November is the most important candidate trait for voters overall in Iowa and South Carolina, ahead of jobs and the economy, shaking up politics as usual, defending their faith and religious values, and fighting terrorism. In New Hampshire, Republican primary voters are about evenly concerned with jobs, terrorism, and winning in November.

The two leading candidates have traded barbs at each other regarding their respective backgrounds, with Trump questioning the legitimacy of Cruz's candidacy for president based on his Canadian birthplace, and Cruz questioning Trump's values based on his New York upbringing. Neither one of these attacks resonates much with voters. Large majorities in all three states don't think Cruz's birthplace is a serious issue, and eight in 10 say Trump's New York roots don't matter to them.

Looking ahead beyond the earliest states, Donald Trump has leads in some of the bigger states to vote in March. Trump is up in Florida and Georgia, while Ted Cruz leads him in Cruz's home state of Texas. In Florida, Trump's lead is large even over home-state Senator Marco Rubio and former governor Jeb Bush is in single digits.

Methodology and complete results can be found below and here.

The first wave was fielded between September 3-10, 2015, with 4860 respondents, and the second wave fieldwork was completed between October 15-22, 2015, with 3952 respondents and the third wave between November 15-19, 2015. The fourth wave was fielded between December 13-17, 2015. The majority of the 2nd-4th wave respondents are recontacted panelists. The first 4 waves consist of interviews in Iowa, New Hampshire, and South Carolina only. The fifth wave added new interviews in Florida, Georgia, and Texas, and was completed between January 17-21, 2016.