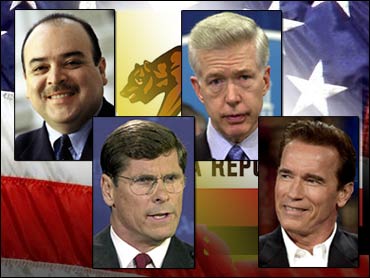 California Lt. Gov. Cruz Bustamante has a significant lead over actor Arnold Schwarzenegger in the race to succeed Gov. Gray Davis, according to a new poll released Saturday night.

Of 801 likely voters surveyed by the Los Angeles Times, 35 percent backed Bustamante, a Democrat, and 22 percent supported Schwarzenegger, a Republican.

Poll data released Friday by the Times showed 50 percent support the effort to oust Davis and 45 percent oppose it.

The new numbers for Bustamante differ from others released lately. Surveys by the Public Policy Institute of California and Field Poll showed Bustamante and Schwarzenegger within five percentage points of each other.

Behind Schwarzenegger in the Times poll were three other Republicans: state Sen. Tom McClintock, with 12 percent; former baseball commissioner Peter Ueberroth, with 7 percent; and Bill Simon, with 6 percent.

Simon, who won the Republican primary last year but lost to Davis by five percentage points in November, backed out of the race Saturday. He said his decision to withdraw was based on his belief that there were "too many Republicans" in the race, and the poll results may bear that out.

CBS News Correspondent Steve Futterman reports Simon's move is a huge boost for Schwarzenegger's campaign, since they were both essentially going after the same voters.

Six out of 10 Democrats said they had decided who to support in the recall, compared with 46 percent of Republicans.

The poll results also showed much could still change before the Oct. 7 special election. Among likely voters, 46 percent said they might change their mind about who to support before Oct. 7.

The poll surveyed 1,351 people, identifying 801 likely voters, between Aug. 16 and Aug. 21. Its margin of error was plus or minus 3 percentage points.