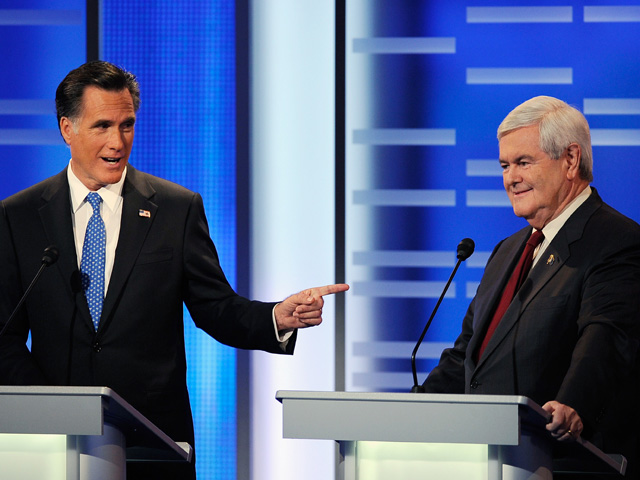 Newt Gingrich has dropped into a tie with Mitt Romney in the race for the Republican presidential nomination, according to a new national poll.

The CNN/ORC International Poll found both Gingrich and Romney with 28 percent support among Republicans and Republican-leaning independents. In the same poll last month, Gingrich led Romney 24 percent to 20 percent.

The poll also found that Ron Paul has risen from nine percent to 14 percent support. All the other candidates were in the single digits.

Gingrich, who had just eight percent support in an October CNN/ORC poll, has risen dramatically in recent weeks. But his momentum may have stalled. A new survey from Democratic polling company Public Policy Polling shows Gingrich with 14 percent support in Iowa, down from 22 percent in a PPP poll one week ago. (It should be noted that PPP conducts its surveys through automated telephone interviews.) Polls last week also suggested Gingrich was losing steam, and the Gallup tracking poll Monday found Gingrich's lead over Romney nationally has narrowed from double digits to four points.

The Republican field remains remarkably fluid; in the CNN/ORC poll, just 35 percent said they would "definitely support" their pick, while more than half said they might change their mind.

Gingrich may be suffering as a result of their rivals turning their fire on him, something he didn't have to contend with when he was polling in the single digits. The Republican presidential contenders have pointed to Gingrich's $1.6 million-plus payment from mortgage giant Freddie Macas evidence that Gingrich is a Washington insider getting rich off his connections. Romney has cast Gingrich as "unreliable" and "zany," and a super PAC operating on Romney's behalf has run attack ads in Iowa suggesting Gingrich has too much "baggage" to be president.

Republicans and Republican-leaning independents nationally continue to see Gingich and Romney as equally likely to defeat President Obama next November, however. In the CNN/ORC survey, 36 percent said Romney had the best chance to win the general election, while 35 percent chose Gingrich. No other candidate cracked ten percent.