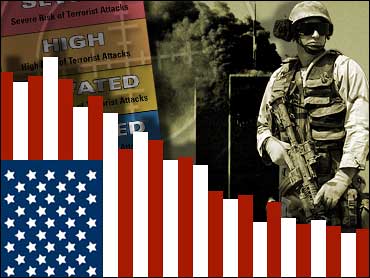 Do Americans feel safer now than before 9/11? For many, the answer is no, according to a CBS News/New York Times poll.

Fifty-four percent of Americans say they generally feel safe, but 46 percent say they feel somewhat uneasy or in danger.

How safe do you feel compared to five years ago?

Also, by a four-to-one margin (48 percent to 12 percent), Americans think the war in Iraq has made the threat of terrorism against the United States worse rather than better.

Has life in America returned to what it was before the 9/11 attacks?

Nearly one in four people say they still feel nervous and edgy. Women are more likely than men to say their behavior has been affected.

There's also increased pessimism about the overall war on terrorism, with 21 percent — the highest number ever — saying the terrorists are winning. Thirty-six percent say the United States is winning and 38 percent say neither side is winning.

Fewer than half of Americans are confident the United States will capture Osama bin Laden, the man believed responsible for the 9/11 attacks.

Still, a majority of Americans, 55 percent, say they approve of how President Bush is handling the war on terror — his highest rating in more than a year, but a sharp decrease from December 2001, when 90 percent approved.

About half of those polled say Bush administration policies have made America safer, but one in four say they've made the United States less safe. A similar number say they've had no effect.

One explanation for that skepticism may be that nearly half of Americans don't think terrorism is a problem a president can do much about.

The number of Americans who say another attack on the United States is likely has dropped to 59 percent, down from a high of 78 percent in the weeks after 9/11. People in the Northeast, where the attacks on the World Trade Center occurred, are the most concerned that their area will be targeted, while those in the Midwest are the least concerned.

Nearly six in 10 say the government has not done all it could to make the country safe from future attacks.

The poll was conducted among a nationwide random sample of 1206 adults, interviewed by telephone August 17-21, 2006. The error due to sampling could be plus or minus three percentage points for results based on the complete sample.

What Is A Material Witness?